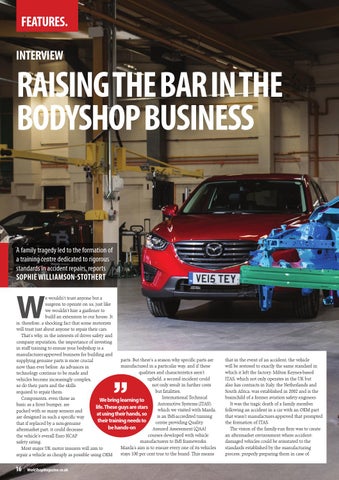 RAISING THE BAR IN THE BODYSHOP BUSINESS

A family tragedy led to the formation of a training centre dedicated to rigorous standards in accident repairs, reports SOPHIE WILLIAMSON-STOTHERT

e wouldn’t trust anyone but a surgeon to operate on us, just like we wouldn’t hire a gardener to build an extension to our house. It is, therefore, a shocking fact that some motorists will trust just about anyone to repair their cars. That’s why, in the interests of driver safety and company reputation, the importance of investing in staff training to ensure your bodyshop is a manufacturer-approved business for building and parts. But there’s a reason why specific parts are supplying genuine parts is more crucial manufactured in a particular way, and if these now than ever before. As advances in qualities and characteristics aren’t technology continue to be made and upheld, a second incident could vehicles become increasingly complex, not only result in further costs so do their parts and the skills but fatalities. required to repair them. International Technical Components, even those as We bring learning to Automotive Systems (ITAS), basic as a front bumper, are life. These guys are stars which we visited with Mazda, packed with so many sensors and at using their hands, so is an IMI-accredited training are designed in such a specific way their training needs to centre providing Quality that if replaced by a non-genuine be hands-on Assured Assessment (QAA) aftermarket part, it could decrease courses developed with vehicle the vehicle’s overall Euro NCAP manufacturers to IMI frameworks. safety rating. Mazda’s aim is to ensure every one of its vehicles Most major UK motor insurers will aim to stays 100 per cent true to the brand. This means repair a vehicle as cheaply as possible using OEM

that in the event of an accident, the vehicle will be restored to exactly the same standard in which it left the factory. Milton Keynes-based ITAS, which not only operates in the UK but also has contracts in Italy, the Netherlands and South Africa, was established in 2002 and is the brainchild of a former aviation safety engineer. It was the tragic death of a family member following an accident in a car with an OEM part that wasn’t manufacturer-approved that prompted the formation of ITAS. The vision of the family-run firm was to create an aftermarket environment where accidentdamaged vehicles could be reinstated to the standards established by the manufacturing process, properly preparing them in case of