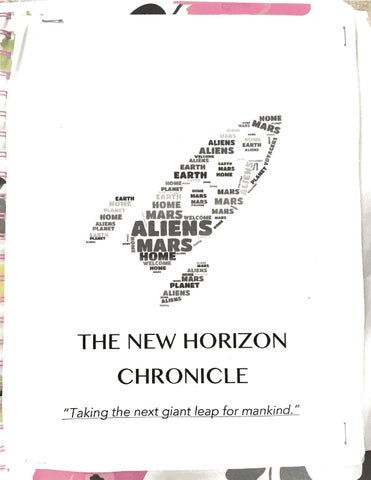 Civilians on Mars do NOT carry firearms, blunt or blade weapons are allowed (only for self-defense purposes) This law is indisputable on the planet Mars because if someone has a firearm, they could take control and this could threaten lives and order, firearms will only be held at the bottom of the ship and can only be accessed in absolute emergencies. Infringement of this law will result in a punishment with a minimum of 7 years in prison.

Abuse of any kind will be charged as a felony or less serious offense. The most severe cases of child abuse will carry felony lifetime sentences (The New Horizon does this to punish felons for their actions and warn others not to follow their actions).

ABUSE According to The New Horizon it is illegal to do any kind of abuse. If you abuse a child you will go to prison for a lifetime of you will go in solitary confinement. We need this wall because it is cruel to abuse children.

People that are born in Mars are citizens (to keep a sense of nationality) If people who are in Mars have a child than the child has the right to become a Mars citizen. In Mars we believe that all women are entitled to respectful and equality.

If parents decide to divorce then they will go to court to decide who has custody. These rules are enforced and if you break them there will be severe punishment. The punishment will be going to prison or solitary confinement. We need this law because the children that are born in Mars need a nationality or just for other reasons need to answer that your child is a Martian.

The people on mars have the right to freedom of speech, freedom to move, and freedom of thought. This law has been placed to give equal rights to each resident of the community. Every resident has their own equal rights to an extent where it can harm a resident emotionally or physically. Every citizen of Mars has the right to say, think what they want. Freedom of speech does not include encouraging actions to harm others. Each law that is broken is followed by the punishment which is solitary confinement.

SELF-DEFENCE All citizens have the right to self-defense depending on the situation. According to The New Horizon, on Mars if someone is harassing you or attacking you, you have the right to defend yourself from that person. However it is illegal to attack someone if you just hate them.