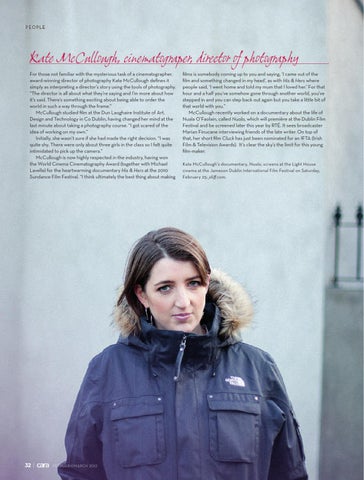 Kate McCullough, cinematograper, director of photography For those not familiar with the mysterious task of a cinematographer, award-winning director of photography Kate McCullough deﬁnes it simply as interpreting a director’s story using the tools of photography. “The director is all about what they’re saying and I’m more about how it’s said. There’s something exciting about being able to order the world in such a way through the frame.” McCullough studied ﬁlm at the Dun Laoghaire Institute of Art, Design and Technology in Co Dublin, having changed her mind at the last minute about taking a photography course. “I got scared of the idea of working on my own.” Initially, she wasn’t sure if she had made the right decision. “I was quite shy. There were only about three girls in the class so I felt quite intimidated to pick up the camera.” McCullough is now highly respected in the industry, having won the World Cinema Cinematography Award (together with Michael Lavelle) for the heartwarming documentary His & Hers at the 2010 Sundance Film Festival. “I think ultimately the best thing about making

ﬁlms is somebody coming up to you and saying, ‘I came out of the ﬁlm and something changed in my head’, as with His & Hers where people said, ‘I went home and told my mum that I loved her.’ For that hour and a half you’ve somehow gone through another world, you’ve stepped in and you can step back out again but you take a little bit of that world with you.” McCullough recently worked on a documentary about the life of Nuala O’Faolain, called Nuala, which will première at the Dublin Film Festival and be screened later this year by RTÉ. It sees broadcaster Marian Finucane interviewing friends of the late writer. On top of that, her short ﬁlm Cluck has just been nominated for an IFTA (Irish Film & Television Awards). It’s clear the sky’s the limit for this young ﬁlm-maker. Kate McCullough’s documentary, Nuala, screens at the Light House cinema at the Jameson Dublin International Film Festival on Saturday, February 25; jdiﬀ.com.