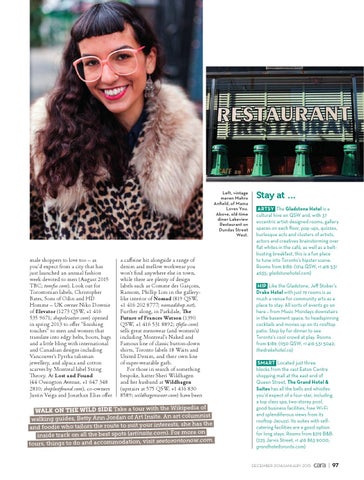 male shoppers to love too – as you’d expect from a city that has just launched an annual fashion week devoted to men (August 2015 TBC; tomfw.com). Look out for Torontonian labels, Christopher Bates, Sons of Odin and HD Homme – UK owner Niko Downie of Elevator (1273 QSW, +1 416 535 9671; shopelevator.com) opened in spring 2013 to offer “finishing touches” to men and women that translate into edgy belts, boots, bags and a little bling with international and Canadian designs including Vancouver’s Pyrrha talisman jewellery, and alpaca and cotton scarves by Montreal label String Theory. At Lost and Found (44 Ossington Avenue, +1 647 348 2810; shoplostfound.com), co-owners Justin Veiga and Jonathan Elias offer

a caffeine hit alongside a range of denim and mellow workwear you won’t find anywhere else in town, while there are plenty of design labels such as Comme des Garçons, Ransom, Phillip Lim in the gallerylike interior of Nomad (819 QSW, +1 416 202 8777; nomadshop.net). Further along, in Parkdale, The Future of Frances Watson (1390 QSW, +1 416 531 8892; tfofw.com) sells great menswear (and women’s) including Montreal’s Naked and Famous line of classic button-down shirts, Toronto labels 18 Waits and United Denim, and their own line of super-wearable garb. For those in search of something bespoke, hatter Sheri Wildhagen and her husband at Wildhagen (upstairs at 575 QSW, +1 416 830 8589; wildhagenwear.com) have been

Wikipedia of WALK ON THE WILD SIDE Take a tour with the art columnist walking guides, Betty Ann Jordan of Art Insite. An ests, she has the and foodie who tailors the route to suit your inter more on inside track on all the best spots (artinsite.com). For rontonow.com. tours, things to do and accommodation, visit seeto

Stay at … ARTSY The Gladstone Hotel is a cultural hive on QSW and, with 37 eccentric artist-designed rooms, gallery spaces on each floor, pop-ups, quizzes, burlesque acts and clusters of artists, actors and creatives brainstorming over flat whites in the café, as well as a beltbusting breakfast, this is a fun place to tune into Toronto’s hipster scene. Rooms from $189. (1214 QSW, +1 416 531 4635; gladstonehotel.com) HIP Like the Gladstone, Jeff Stober’s Drake Hotel with just 19 rooms is as much a venue for community arts as a place to stay. All sorts of events go on here – from Music Mondays downstairs in the basement space, to headspinning cocktails and movies up on its rooftop patio. Stop by for dinner to see Toronto’s cool crowd at play. Rooms from $189. (1150 QSW, +1 416 531 5042; thedrakehotel.ca) SMART Located just three blocks from the vast Eaton Centre shopping mall at the east end of Queen Street, The Grand Hotel & Suites has all the bells and whistles you’d expect of a four-star, including a top class spa, two-storey pool, good business facilities, free Wi-Fi and splendiferous views from its rooftop Jacuzzi. Its suites with selfcatering facilities are a good option for long stays. Rooms from $219 B&B. (225 Jarvis Street, +1 416 863 9000; grandhoteltoronto.com) DECEMBER 2014/JANUARY 2015