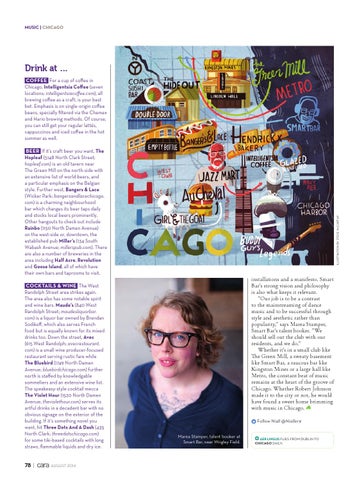 Drink at … COFFEE For a cup of coffee in Chicago, Intelligentsia Coffee (seven locations; intelligentsiacoffee.com), all brewing coffee as a craft, is your best bet. Emphasis is on single-origin coffee beans, specially filtered via the Chemex and Hario brewing methods. Of course, you can still get your regular lattés, cappuccinos and iced coffee in the hot summer as well.

COCKTAILS & WINE The West Randolph Street area strikes again. The area also has some notable spirit and wine bars. Maude’s (840 West Randolph Street; maudesliquorbar. com) is a liquor bar owned by Brendan Sodikoff, which also serves French food but is equally known for its mixed drinks too. Down the street, Avec (615 West Randolph; avecrestaurant. com) is a small wine producer-focused restaurant serving rustic fare while The Bluebird (1749 North Damen Avenue; bluebirdchicago.com) further north is staffed by knowledgable sommeliers and an extensive wine list. The speakeasy-style cocktail mecca The Violet Hour (1520 North Damen Avenue; theviolethour.com) serves its artful drinks in a decadent bar with no obvious signage on the exterior of the building. If it’s something novel you want, hit Three Dots And A Dash (435 North Clark; threedotschicago.com) for some tiki-based cocktails with long straws, flammable liquids and dry ice.

BEER If it’s craft beer you want, The Hopleaf (5148 North Clark Street; hopleaf.com) is an old tavern near The Green Mill on the north-side with an extensive list of world beers, and a particular emphasis on the Belgian style. Further west, Bangers & Lace (Wicker Park; bangersandlacechicago. com) is a charming neighbourhood bar which changes its beer taps daily and stocks local beers prominently. Other hangouts to check out include Rainbo (1150 North Damen Avenue) on the west-side or, downtown, the established pub Miller’s (134 South Wabash Avenue; millerspub.com). There are also a number of breweries in the area including Half Acre, Revolution and Goose Island, all of which have their own bars and taprooms to visit.

installations and a manifesto. Smart Bar’s strong vision and philosophy is also what keeps it relevant. “Our job is to be a contrast to the mainstreaming of dance music and to be successful through style and aesthetic rather than popularity,” says Marea Stamper, Smart Bar’s talent booker. “We should sell out the club with our residents, and we do.” Whether it’s in a small club like The Green Mill, a sweaty basement like Smart Bar, a raucous bar like Kingston Mines or a large hall like Metro, the constant beat of music remains at the heart of the groove of Chicago. Whether Robert Johnson made it to the city or not, he would have found a sweet home brimming with music in Chicago. Follow Niall @Nialler9 Marea Stamper, talent booker at Smart Bar, near Wrigley Field.