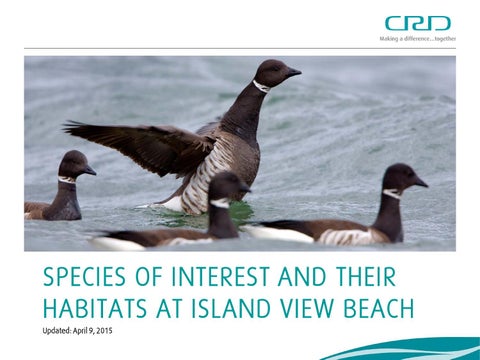 SPECIES OF INTEREST AND THEIR HABITATS AT ISLAND VIEW BEACH Updated: April 9, 2015

Species of Interest and their Habitats

How many species are there?

Species of Interest and their Habitats There are many plant and animal species that call Island View Beach home. Some spend their whole life at Island View Beach while others may only pass through for a few days a year to utilize important habitat found here. They can be native or introduced, rare or common. During the ecosystem mapping program, 67 species of vascular plants were identified. 16 of these are considered introduced species and 6 are species at risk. 181 species of birds have been identified at Island View Beach. The Georgia Basin bog spider and the black widow are two of 89 spider species known to occur at Island View Beach. There are a large number of invertebrate species that we know very little about. We donâ&#x20AC;&#x2122;t know it all and some we may never know so we use the best information available and proceed with caution.

Sidney Channel Important Bird Area Island View Beach adjoins the Sidney Channel Important Bird Area. This area is noted for the variety of marine birds that occur throughout the year. Many of these species use the nearshore area at Island View Beach and our activities there may affect them. Numerous shorebirds utilize the beaches and intertidal zone throughout the year and particularly during spring and fall migrations. During winter, sea ducks are spread throughout the channel, and during migration they are joined by grebes, loons and brant. Bird Studies Canada. 2014. Bird Data for Island View Beach. Memo to CRD Parks from Karen Barry, BC Program Coordinator. http://www.ibacanada.ca/

Bird Species E-bird is an internet birding database supported by the Cornell Lab of Ornithology and National Audubon Society. It provides moderated bird lists throughout the world. Locally, Island View Beach is a hotspot. At 167 it has one of the highest species counts for coastal sites in the region. Combined with the Breeding Bird Atlas and the Coastal Waterbird Surveys, the number of species reaches 181. Because birds are highly mobile, they may use the park directly on an intermittent basis for key parts of their life history. They may be resident seasonally or year-round or may be using areas immediately adjacent to the park. These coastal sites provide important habitat for many species. http://www.ibacanada.ca/ http://ebird.org/content/canada/ Accessed November, 2014 Bird Studies Canada. 2014. Bird Data for Island View Beach. Memo to CRD Parks from Karen Barry, BC Program Coordinator.

no longer exists in the wild in Canada

may become threatened or endangered

likely to become endangered if nothing is done

Species at Risk There are many species at risk linked to Island View Beach. Their risk assessment is based on factors that could lead to their extinction or disappearance from nature. Species are assessed for conservation risk at the provincial, national and global level. In many cases, these species are at risk because they rely on special habitats that may be rare or at risk due to modifications or changes through time. Species identified under Schedule One of the Species at Risk Act of Canada require designation of Critical Habitat and, as land stewards, we are obliged to provide effective protection of the identified habitat identified within the park and work with our neighbours to ensure park activities are not impacting species at risk or their habitat on adjacent lands.

Nine of these species are confirmed as seasonal or year-round residents in Island View Beach Regional Park.

Confirmed Species at Risk at Island View Beach There are 33 confirmed species at risk at Island View Beach including: â&#x20AC;˘ globally endangered species like the sand verbena moth, â&#x20AC;˘ nationally threatened species like the common nighthawk, and â&#x20AC;˘ provincially threatened species like the yellow sand verbena. Some species are reliant on dune or wetland habitat while others are reliant on the shoreline or nearshore marine habitats. Nine of these species are confirmed as seasonal or year-round residents in Island View Beach Regional Park. Others are known to use the park intermittently or utilize areas immediately adjacent to the park and therefore may be affected by our activities in the park. There are other species at risk that may occur on adjacent lands and could or should also occupy habitats in the regional park but have either not been detected there or have been extirpated. BC Conservation Data Centre records accessed November, 2014 and cross-referenced with other observation data from Island View Beach. http://a100.gov.bc.ca/pub/eswp/

Species of Concern and their Habitat Here are a few of the habitat types found at Island View Beach Regional Park and some species of interest that use them. The common nighthawk is nationally threatened. It uses the habitat just above the log line and the tide, which is sparsely vegetated and just shoreward of the active beach where sand verbena and black knotweed merge into fescue, gumweed and dune grass. They rely on their excellent camouflage to hide out during the day.

Species of Concern and their Habitat The common nighthawk is a migratory bird spending winters in South America. These birds hunt insects on the wing at dawn and dusk often taking advantage of insect clouds over open water. Canadian populations may have dropped by as much as half since the mid-1960s and they are ranked as a threatened species in Canada. Across North America, threats include reduction in mosquitoes and other aerial insects due to increasing pesticide use, and habitat loss. (Cornell bird lab) http://www.allaboutbirds.org/guide/Common_nighthawk/lifehistory Poulin, R.G., S.D. Grindal, and R.M. Brigham. 1996. Common Nighthawk (Chordeiles minor). In The Birds of North America, No. 213 (A. Poole and F. Gill, eds.). The Academy of Natural Sciences, Philadelphia, PA The American Ornithologists' Union, Washington, D.C.

Species of Concern and their Habitat Nighthawks nest on beach dunes and dune slacks in the backshore. The unprotected ground nest leaves eggs and chicks vulnerable to disturbance and predation. Nesting period is about 6-8 weeks in summer (late May to early August). After hatching, the nestling period is 17-18 days prior to fledging. Nestlings are quite vulnerable during this time. Work is underway by Environment Canada to identify critical habitat for this species. (Cornell bird lab) http://www.allaboutbirds.org/guide/Common_nighthawk/lifehistory Poulin, R.G., S.D. Grindal, and R.M. Brigham. 1996. Common Nighthawk (Chordeiles minor). In The Birds of North America, No. 213 (A. Poole and F. Gill, eds.). The Academy of Natural Sciences, Philadelphia, PA The American Ornithologists' Union, Washington, D.C.

Species of Concern and their Habitat Anyone who walks the beaches at Island View Beach has likely seen the bright flowers of the yellow sand-verbena. It is found on backshore sites where there is active erosion and deposition by wind and waves. This species is ranked provincially as a species of special concern. But it has an important role to play for another species.

Sand-verbena Moth The sand-verbena moth (Copablepharon fuscum) is critically imperiled and known to exist in only ten populations in the Strait of Georgia and Puget Sound. NatureServe: Global Status G1G2; National Status N1N2. This moth is a habitat specialist tied to a highly threatened habitat type. It is fully dependent on yellow sand-verbena. Adult moths feed on the nectar and lay eggs in the flowers and larvae feed on its leaves and flowers. Critical habitat designation for this species recognizes the dynamic nature of the shoreline by utilizing a â&#x20AC;&#x153;bounding rectangleâ&#x20AC;?. It captures all of the shoreline and backshore areas of the Regional Park and up to the tip of Cordova Spit. Within this rectangle area any area with sandverbena plants that flower at least every two years, and the surrounding soils or sands within 5 meters, are considered critical habitat. http://www.sararegistry.gc.ca/document/default_e.cfm?documentID=1045 http://www.speciesatrisk.bc.ca/node/7871 http://www.xerces.org/sand-verbena-moth/

Species of Concern and their Habitat Contorted-pod evening primrose

Species of Concern and their Habitat In similar active sand habitats, you can find the contorted-pod evening-primrose (Cammisonia contorta). There is one small population at Island View Beach Regional Park. This nationally endangered plant is a sprawling, tap-rooted annual found on open, dry, sandy sites. It is known from California, Nevada, Idaho and British Columbia. The Canadian population is estimated to have declined by 35% in recent years. Within the province, it is restricted to seven small patches on the coastal sand dunes of southern Vancouver Island and Savary Island. The primary threats are habitat loss to development, competition with invasive plants and trampling by people. Parks Canada Agency-Government of Canada. 2011. Recovery Strategy for the Contorted-pod Evening-primrose (Camissonia contorta) in Canada. Species at Risk Act. Recovery Strategy Series. Parks Canada Agency, Ottawa. Vi + 30 pp.

Critical Habitat The critical habitat for this species at Island View Beach Regional Park has been published in the Recovery Strategy. This small patch coincides with the remnant herbaceous dune habitat in the park, which is outside the stabilizing influence of the artificial berm along the shoreline to the south. The recovery strategy sets out goals for conserving existing populations and allowing for their expansion.

Species of Concern and their Habitat Beach Flat habitat is essentially non-vegetated sands and gravels. This habitat is in the foreshore and subject to regular (tidal) or irregular (storm surge) inundation. This marine interface is very important for many shorebird species as feeding habitat and access to nesting habitat (usually just shoreward of this zone).

Species of Concern and their Habitat The western sandpiper is a migratory species that, for the most part, just passes by our beaches on its journey to the northwestern coast of Alaska, where it nests. While these birds donâ&#x20AC;&#x2122;t face the same local challenges with nest disturbance, they have a number of key locations along their migration route where they need the opportunity to rest and feed. They may only spend a couple of tide cycles at a beach like Island View and during that short time, they need to fuel up for the long trip to their nesting grounds. If the birds are distracted with other beach users like people and especially their pets, then the birds spend far more time in â&#x20AC;&#x153;vigilanceâ&#x20AC;? mode (watching for predators) and far less time feeding. This can lead to birds arriving on the nesting grounds without enough energy to successfully nest or perhaps they will not even have the energy to complete the trip. There are several species of sandpiper and other shorebirds that use local beaches in this way. There are also some species that nest in the low dunes in the summer. http://www.allaboutbirds.org/

Species of Concern and their Habitat Summary Island View Beach Regional Park supports a complex of habitats that are limited in supply across the region. These habitats are important for a wide range of resident and migratory species. There are 33 confirmed species at risk in or adjacent to the regional park. There are 9 confirmed resident or breeding in the park. Many of the conservation risks to both rare and common species are linked to modification of habitat and direct disturbance by human activities. Current legislation and policy require that land stewards provide effective protection for species at risk and their critical habitat.