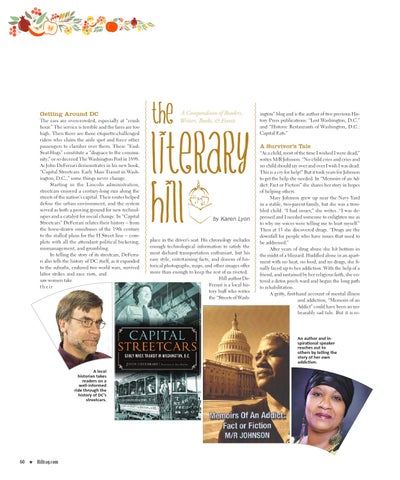 Getting Around DC The cars are overcrowded, especially at “crush hour.” The service is terrible and the fares are too high. Then there are those etiquette-challenged riders who claim the aisle spot and force other passengers to clamber over them. These “EndSeat Hogs” constitute a “disgrace to the community,” or so decreed The Washington Post in 1898. As John DeFerrari demonstrates in his new book, “Capital Streetcars: Early Mass Transit in Washington, D.C.,” some things never change. Starting in the Lincoln administration, streetcars enjoyed a century-long run along the streets of the nation’s capital. Their routes helped define the urban environment, and the system served as both a proving ground for new technologies and a catalyst for social change. In “Capital Streetcars” DeFerrari relates their history – from the horse-drawn omnibuses of the 19th century to the stalled plans for the H Street line – complete with all the attendant political bickering, mismanagement, and grumbling. In telling the story of its streetcars, DeFerrari also tells the history of DC itself, as it expanded to the suburbs, endured two world wars, survived labor strikes and race riots, and saw women take their

by Karen Lyon place in the driver’s seat. His chronology includes enough technological information to satisfy the most diehard transportation enthusiast, but his easy style, entertaining facts, and dozens of historical photographs, maps, and other images offer more than enough to keep the rest of us riveted. Hill author DeFerrari is a local history buff who writes the “Streets of Wash-

“As a child, most of the time I wished I were dead,” writes M/R Johnson. “No child cries and cries and no child should say over and over I wish I was dead. This is a cry for help!” But it took years for Johnson to get the help she needed. In “Memoirs of an Addict: Fact or Fiction” she shares her story in hopes of helping others. Mary Johnson grew up near the Navy Yard in a stable, two-parent family, but she was a troubled child. “I had issues,” she writes. “I was depressed and I needed someone to enlighten me as to why my voices were telling me to hurt myself.” Then at 13 she discovered drugs. “Drugs are the downfall for people who have issues that need to be addressed.” After years of drug abuse she hit bottom in the midst of a blizzard. Huddled alone in an apartment with no heat, no food, and no drugs, she finally faced up to her addiction. With the help of a friend, and sustained by her religious faith, she entered a detox psych ward and began the long path to rehabilitation. A gritty, first-hand account of mental illness and addiction, “Memoirs of an Addict” could have been an unbearably sad tale. But it is re-

An author and inspirational speaker reaches out to others by telling the story of her own addiction. A local historian takes readers on a well-informed ride through the history of DC’s streetcars.