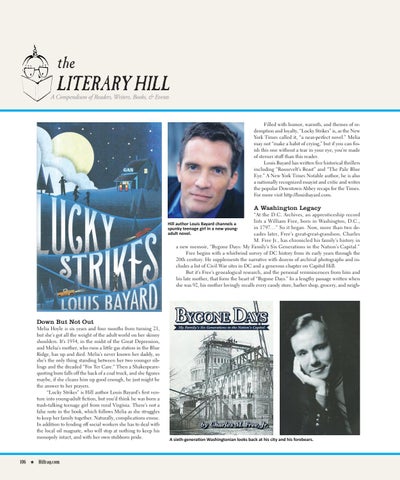 Filled with humor, warmth, and themes of redemption and loyalty, “Lucky Strikes” is, as the New York Times called it, “a near-perfect novel.” Melia may not “make a habit of crying,” but if you can finish this one without a tear in your eye, you’re made of sterner stuff than this reader. Louis Bayard has written five historical thrillers including “Roosevelt’s Beast” and “The Pale Blue Eye.” A New York Times Notable author, he is also a nationally recognized essayist and critic and writes the popular Downtown Abbey recaps for the Times. For more visit http://louisbayard.com.

A Washington Legacy “At the D.C. Archives, an apprenticeship record lists a William Free, born in Washington, D.C., Hill author Louis Bayard channels a in 1797…” So it began. Now, more than two despunky teenage girl in a new youngadult novel. cades later, Free’s great-great-grandson, Charles M. Free Jr., has chronicled his family’s history in a new memoir, “Bygone Days: My Family’s Six Generations in the Nation’s Capital.” Free begins with a whirlwind survey of DC history from its early years through the 20th century. He supplements the narrative with dozens of archival photographs and includes a list of Civil War sites in DC and a generous chapter on Capitol Hill. But it’s Free’s genealogical research, and the personal reminiscences from him and his late mother, that form the heart of “Bygone Days.” In a lengthy passage written when she was 92, his mother lovingly recalls every candy store, barber shop, grocery, and neigh-

Down But Not Out Melia Hoyle is six years and four months from turning 21, but she’s got all the weight of the adult world on her skinny shoulders. It’s 1934, in the midst of the Great Depression, and Melia’s mother, who runs a little gas station in the Blue Ridge, has up and died. Melia’s never known her daddy, so she’s the only thing standing between her two younger siblings and the dreaded “Fos Ter Care.” Then a Shakespearequoting bum falls off the back of a coal truck, and she figures maybe, if she cleans him up good enough, he just might be the answer to her prayers. “Lucky Strikes” is Hill author Louis Bayard’s first venture into young-adult fiction, but you’d think he was born a trash-talking teenage girl from rural Virginia. There’s not a false note in the book, which follows Melia as she struggles to keep her family together. Naturally, complications ensue. In addition to fending off social workers she has to deal with the local oil magnate, who will stop at nothing to keep his monopoly intact, and with her own stubborn pride.

A sixth-generation Washingtonian looks back at his city and his forebears.