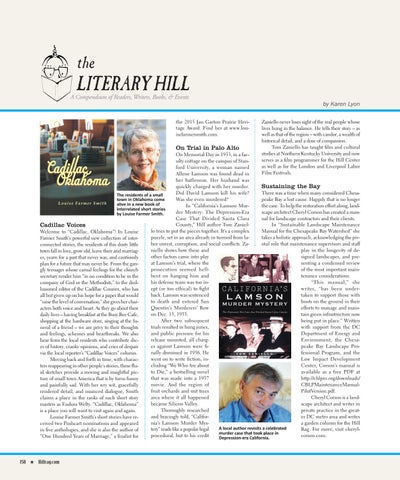 the 2015 Jan Garton Prairie Heritage Award. Find her at www.louisefarmersmith.com.

On Trial in Palo Alto

by Karen Lyon Zaniello never loses sight of the real people whose lives hung in the balance. He tells their story – as well as that of the region – with candor, a wealth of historical detail, and a dose of compassion. Tom Zaniello has taught film and cultural studies at Northern Kentucky University and now serves as a film programmer for the Hill Center as well as for the London and Liverpool Labor Film Festivals.

On Memorial Day in 1933, in a faculty cottage on the campus of Stanford University, a woman named Allene Lamson was found dead in her bathroom. Her husband was Sustaining the Bay quickly charged with her murder. There was a time when many considered ChesaDid David Lamson kill his wife? The residents of a small peake Bay a lost cause. Happily that is no longer Was she even murdered? town in Oklahoma come alive in a new book of the case. To help the restoration effort along, landIn “California’s Lamson Murinterrelated short stories scape architect Cheryl Corson has created a mander Mystery: The Depression-Era by Louise Farmer Smith. ual for landscape contractors and their clients. Case That Divided Santa Clara In “Sustainable Landscape Maintenance County,” Hill author Tom ZanielCadillac Voices Manual for the Chesapeake Bay Watershed” she lo tries to put the pieces together. It’s a complex Welcome to “Cadillac, Oklahoma”! In Louise takes a holistic approach, acknowledging the pivpuzzle, set in an area already in turmoil from laFarmer Smith’s powerful new collection of interotal role that maintenance supervisors and staff bor unrest, corruption, and social conflicts. Zaconnected stories, the residents of this dusty little play in the longevity of deniello shows how these and town fall in love, grow old, leave their arid marriagsigned landscapes, and preother factors came into play es, yearn for a past that never was, and cautiously senting a condensed review at Lamson’s trial, where the plan for a future that may never be. From the ganof the most important mainprosecution seemed hellgly teenager whose carnal feelings for the church tenance considerations. bent on hanging him and secretary render him “in no condition to be in the “This manual,” she his defense team was too incompany of God or the Methodists,” to the disilwrites, “has been underept (or too ethical) to fight lusioned editor of the Cadillac Courier, who has taken to support those with back. Lamson was sentenced all but given up on his hope for a paper that would boots on the ground in their to death and entered San “raise the level of conversation,” she gives her charefforts to manage and mainQuentin’s Murderers’ Row acters both voice and heart. As they go about their tain green infrastructure now on Dec. 15, 1933. daily lives – having breakfast at the Busy Bee Cafe, being put in place.” Written After two subsequent shopping at the hardware store, singing at the fuwith support from the DC trials resulted in hung juries, neral of a friend – we are privy to their thoughts Department of Energy and and public pressure for his and feelings, schemes and heartbreaks. We also Environment, the Chesarelease mounted, all charghear from the local residents who contribute slicpeake Bay Landscape Proes against Lamson were fies of history, cranky opinions, and cries of despair fessional Program, and the nally dismissed in 1936. He via the local reporter’s “Cadillac Voices” column. Low Impact Development went on to write fiction, inMoving back and forth in time, with characCenter, Corson’s manual is cluding “We Who Are about ters reappearing in other people’s stories, these fluavailable as a free PDF at to Die,” a bestselling novel id sketches provide a moving and insightful pichttp://cblpro.org/downloads/ that was made into a 1937 ture of small town America that is by turns funny CBLPMaintenanceManualmovie. And the region of and painfully sad. With her wry wit, gracefully PilotVersion.pdf. fruit orchards and nut trees rendered detail, and nuanced dialogue, Smith Cheryl Corson is a landarea where it all happened claims a place in the ranks of such short story scape architect and writer in became Silicon Valley. masters as Eudora Welty. “Cadillac, Oklahoma” private practice in the greatThoroughly researched is a place you will want to visit again and again. er DC metro area and writes and bracingly told, “CaliforLouise Farmer Smith’s short stories have rea garden column for the Hill nia’s Lamson Murder Mysceived two Pushcart nominations and appeared A local author revisits a celebrated Rag. For more, visit cheryltery” reads like a popular legal in five anthologies, and she is also the author of murder case that took place in corson.com. procedural, but to his credit “One Hundred Years of Marriage,” a finalist for Depression-era California.