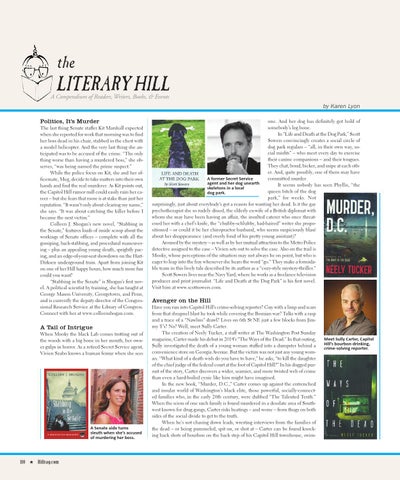 by Karen Lyon Politics, It’s Murder The last thing Senate staffer Kit Marshall expected when she reported for work that morning was to find her boss dead in his chair, stabbed in the chest with a model helicopter. And the very last thing she anticipated was to be accused of the crime. “The only thing worse than having a murdered boss,” she observes, “was being named the prime suspect.” While the police focus on Kit, she and her officemate, Meg, decide to take matters into their own hands and find the real murderer. As Kit points out, the Capitol Hill rumor mill could easily ruin her career – but she fears that more is at stake than just her reputation. “It wasn’t only about clearing my name,” she says. “It was about catching the killer before I became the next victim.” Colleen J. Shogan’s new novel, “Stabbing in the Senate,” features loads of inside scoop about the workings of Senate offices – complete with all the gossiping, back-stabbing, and procedural maneuvering – plus an appealing young sleuth, sprightly pacing, and an edge-of-your-seat showdown on the HartDirksen underground train. Apart from joining Kit on one of her Hill happy hours, how much more fun could you want? “Stabbing in the Senate” is Shogan’s first novel. A political scientist by training, she has taught at George Mason University, Georgetown, and Penn, and is currently the deputy director of the Congressional Research Service at the Library of Congress. Connect with her at www.colleenshogan.com.

A Tail of Intrigue When Mooky the black Lab comes trotting out of the woods with a big bone in her mouth, her owner gulps in horror. As a retired Secret Service agent, Vivien Szabo knows a human femur when she sees

A Senate aide turns sleuth when she’s accused of murdering her boss.

one. And her dog has definitely got hold of somebody’s leg bone. In “Life and Death at the Dog Park,” Scott Sowers convincingly creates a social circle of dog park regulars – “all, in their own way, social misfits” – who meet every day to exercise their canine companions – and their tongues. They chat, bond, bicker, and snipe at each other. And, quite possibly, one of them may have A former Secret Service committed murder. agent and her dog unearth It seems nobody has seen Phyllis, “the skeletons in a local queen bitch of the dog dog park. park,” for weeks. Not surprisingly, just about everybody’s got a reason for wanting her dead. Is it the gay psychotherapist she so rudely dissed, the elderly ex-wife of a British diplomat with whom she may have been having an affair, the insulted caterer who once threatened her with a chef’s knife, the “chubby-schlubby, bad-haired” writer she propositioned – or could it be her chiropractor husband, who seems suspiciously blasé about her disappearance (and overly fond of his pretty young assistant)? Aroused by the mystery – as well as by her mutual attraction to the Metro Police detective assigned to the case – Vivien sets out to solve the case. Also on the trail is Mooky, whose perceptions of the situation may not always be on point, but who is eager to leap into the fray whenever she hears the word “go.” They make a formidable team in this lively tale described by its author as a “cozy-style mystery-thriller.” Scott Sowers lives near the Navy Yard, where he works as a freelance television producer and print journalist. “Life and Death at the Dog Park” is his first novel. Visit him at www.scottsowers.com.

Avenger on the Hill Have you run into Capitol Hill’s crime-solving reporter? Guy with a limp and scars from that shrapnel blast he took while covering the Bosnian war? Talks with a rasp and a trace of a “Nawlins” drawl? Lives on 6th St NE just a few blocks from Jimmy T’s? No? Well, meet Sully Carter. The creation of Neely Tucker, a staff writer at The Washington Post Sunday magazine, Carter made his debut in 2014’s “The Ways of the Dead.” In that outing, Sully investigated the death of a young woman stuffed into a dumpster behind a convenience store on Georgia Avenue. But the victim was not just any young woman. “What kind of a death wish do you have to have,” he asks, “to kill the daughter of the chief judge of the federal court at the foot of Capitol Hill?” In his dogged pursuit of the story, Carter discovers a wider, seamier, and more twisted web of crime than even a hard-boiled cynic like him might have imagined. In the new book, “Murder, D.C.,” Carter comes up against the entrenched and insular world of Washington’s black elite, those powerful, socially-connected families who, in the early 20th century, were dubbed “The Talented Tenth.” When the scion of one such family is found murdered in a desolate area of Southwest known for drug gangs, Carter risks beatings – and worse – from thugs on both sides of the social divide to get to the truth. When he’s not chasing down leads, wresting interviews from the families of the dead – or being pummeled, spit on, or shot at – Carter can be found knocking back shots of bourbon on the back step of his Capitol Hill townhouse, swim-