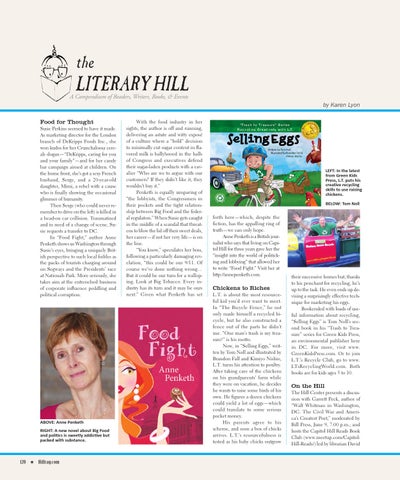 by Karen Lyon Food for Thought Susie Perkins seemed to have it made. As marketing director for the London branch of DeKripps Foods Inc., she won kudos for her Crunchaloosa cereals slogan—“DeKripps, caring for you and your family”—and for her candy bar campaign aimed at children. On the home front, she’s got a sexy French husband, Serge, and a 20-year-old daughter, Mimi, a rebel with a cause who is finally showing the occasional glimmer of humanity. Then Serge (who could never remember to drive on the left) is killed in a head-on car collision. Traumatized and in need of a change of scene, Susie requests a transfer to DC. In “Food Fight,” author Anne Penketh shows us Washington through Susie’s eyes, bringing a uniquely British perspective to such local foibles as the packs of tourists charging around on Segways and the Presidents’ race at Nationals Park. More seriously, she takes aim at the entrenched business of corporate influence peddling and political corruption.

ABOVE: Anne Penketh RIGHT: A new novel about Big Food and politics is sweetly addictive but packed with substance.

With the food industry in her sights, the author is off and running, delivering an astute and witty exposé of a culture where a “bold” decision to minimally cut sugar content in flavored milk is ballyhooed in the halls of Congress and executives defend their sugar-laden products with a cavalier “Who are we to argue with our customers? If they didn’t like it, they wouldn’t buy it.” Penketh is equally unsparing of “the lobbyists, the Congressmen in their pockets and the tight relationship between Big Food and the federal regulators.” When Susie gets caught in the middle of a scandal that threatens to blow the lid off their sweet deals, her career—if not her very life—is on the line. “You know,” speculates her boss, following a particularly damaging revelation, “this could be our 9/11. Of course we’ve done nothing wrong… But it could be our turn for a walloping. Look at Big Tobacco. Every industry has its turn and it may be ours next.” Given what Penketh has set

LEFT: In the latest from Green Kids Press, L.T. puts his creative recycling skills to use raising chickens. BELOW: Tom Noll

forth here—which, despite the fiction, has the appalling ring of truth—we can only hope. Anne Penketh is a British journalist who says that living on Capitol Hill for three years gave her the “insight into the world of politicking and lobbying” that allowed her to write “Food Fight.” Visit her at http://annepenketh.com.

Chickens to Riches L.T. is about the most resourceful kid you’d ever want to meet. In “The Bicycle Fence,” he not only made himself a recycled bicycle, but he also constructed a fence out of the parts he didn’t use. “One man’s trash is my treasure!” is his motto. Now, in “Selling Eggs,” written by Tom Noll and illustrated by Brandon Fall and Kimiyo Nishio, L.T. turns his attention to poultry. After taking care of the chickens on his grandparents’ farm while they were on vacation, he decides he wants to raise some birds of his own. He figures a dozen chickens could yield a lot of eggs—which could translate to some serious pocket money. His parents agree to his scheme, and soon a box of chicks arrives. L.T.’s resourcefulness is tested as his baby chicks outgrow

their successive homes but, thanks to his penchant for recycling, he’s up to the task. He even ends up devising a surprisingly effective technique for marketing his eggs. Bookended with loads of useful information about recycling, “Selling Eggs” is Tom Noll’s second book in his “Trash to Treasure” series for Green Kids Press, an environmental publisher here in DC. For more, visit www. GreenKidsPress.com. Or to join L.T.’s Recycle Club, go to www. LTsRecyclingWorld.com. Both books are for kids ages 5 to 10.