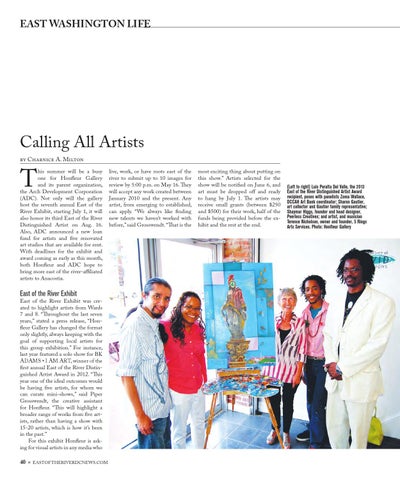 Calling All Artists by Charnice A. Milton

his summer will be a busy one for Honfleur Gallery and its parent organization, the Arch Development Corporation (ADC). Not only will the gallery host the seventh annual East of the River Exhibit, starting July 1, it will also honor its third East of the River Distinguished Artist on Aug. 16. Also, ADC announced a new loan fund for artists and five renovated art studios that are available for rent. With deadlines for the exhibit and award coming as early as this month, both Honfleur and ADC hope to bring more east of the river-affiliated artists to Anacostia.

East of the River Exhibit

East of the River Exhibit was created to highlight artists from Wards 7 and 8. “Throughout the last seven years,” stated a press release, “Honfleur Gallery has changed the format only slightly, always keeping with the goal of supporting local artists for this group exhibition.” For instance, last year featured a solo show for BK ADAMS • I AM ART, winner of the first annual East of the River Distinguished Artist Award in 2012. “This year one of the ideal outcomes would be having five artists, for whom we can curate mini-shows,” said Piper Grosswendt, the creative assistant for Honfleur. “This will highlight a broader range of works from five artists, rather than having a show with 15-20 artists, which is how it’s been in the past.” For this exhibit Honfleur is asking for visual artists in any media who 40 H EASTOFTHERIVERDCNEWS.COM

live, work, or have roots east of the river to submit up to 10 images for review by 5:00 p.m. on May 16. They will accept any work created between January 2010 and the present. Any artist, from emerging to established, can apply. “We always like finding new talents we haven’t worked with before,” said Grosswendt. “That is the

most exciting thing about putting on this show.” Artists selected for the show will be notified on June 6, and art must be dropped off and ready to hang by July 1. The artists may receive small grants (between $250 and $500) for their work, half of the funds being provided before the exhibit and the rest at the end.

East of the River Magazine May 2014

East of the River Magazine May 2014