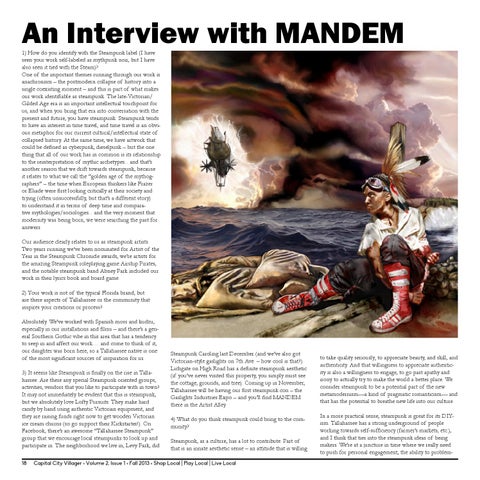 An Interview with MANDEM 1) How do you identify with the Steampunk label (I have seen your work self-labeled as mythpunk noir, but I have also seen it tied with the Steam)? One of the important themes running through our work is anachronism – the postmodern collapse of history into a single coexisting moment – and this is part of what makes our work identifiable as steampunk. The late-Victorian/ Gilded Age era is an important intellectual touchpoint for us, and when you bring that era into conversation with the present and future, you have steampunk. Steampunk tends to have an interest in time travel, and time travel is an obvious metaphor for our current cultural/intellectual state of collapsed history. At the same time, we have artwork that could be defined as cyberpunk, dieselpunk – but the one thing that all of our work has in common is its relationship to the reinterpretation of mythic archetypes... and that’s another reason that we drift towards steampunk, because it relates to what we call the “golden age of the mythographers” – the time when European thinkers like Frazer or Eliade were first looking critically at their society and trying (often unsuccessfully, but that’s a different story) to understand it in terms of deep time and comparative mythologies/sociologies... and the very moment that modernity was being born, we were searching the past for answers. Our audience clearly relates to us as steampunk artists. Two years running we’ve been nominated for Artist of the Year in the Steampunk Chronicle awards, we’re artists for the amazing Steampunk roleplaying game Airship Pirates, and the notable steampunk band Abney Park included our work in their lyrics book and board game. 2) Your work is not of the typical Florida brand, but are there aspects of Tallahassee or the community that inspires your creations or process? Absolutely. We’ve worked with Spanish moss and kudzu, especially in our installations and films – and there’s a general Southern Gothic vibe in this area that has a tendency to seep in and affect our work..... and come to think of it, our daughter was born here, so a Tallahassee native is one of the most significant sources of inspiration for us. 3) It seems like Steampunk is finally on the rise in Tallahassee. Are there any special Steampunk oriented groups, activities, vendors that you like to participate with in town? It may not immediately be evident that this is steampunk, but we absolutely love Lofty Pursuits. They make hard candy by hand using authentic Victorian equipment, and they are raising funds right now to get wooden Victorian ice cream churns (so go support their Kickstarter!). On Facebook, there’s an awesome “Tallahassee Steampunk” group that we encourage local steampunks to look up and participate in. The neighborhood we live in, Levy Park, did 18

Steampunk Caroling last December (and we’ve also got Victorian-style gaslights on 7th Ave. – how cool is that?). Lichgate on High Road has a definite steampunk aesthetic (if you’ve never visited this property, you simply must see the cottage, grounds, and tree). Coming up in November, Tallahassee will be having our first steampunk con – the Gaslights Industries Expo – and you’ll find MANDEM there in the Artist Alley. 4) What do you think steampunk could bring to the community? Steampunk, as a culture, has a lot to contribute. Part of that is an innate aesthetic sense – an attitude that is willing

to take quality seriously; to appreciate beauty, and skill, and authenticity. And that willingness to appreciate authenticity is also a willingness to engage, to go past apathy and irony to actually try to make the world a better place. We consider steampunk to be a potential part of the new metamodernism—a kind of pragmatic romanticism— and that has the potential to breathe new life into our culture. In a more practical sense, steampunk is great for its DIYism. Tallahassee has a strong underground of people working towards self-sufficiency (farmer’s markets, etc.), and I think that ties into the steampunk ideas of being makers. We’re at a juncture in time where we really need to push for personal engagement, the ability to problem- 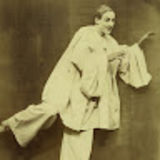 In our first edition in our new quarterly format, Capital City Villager in Tallahassee investigates officers who are under investigation aft...

In our first edition in our new quarterly format, Capital City Villager in Tallahassee investigates officers who are under investigation aft...