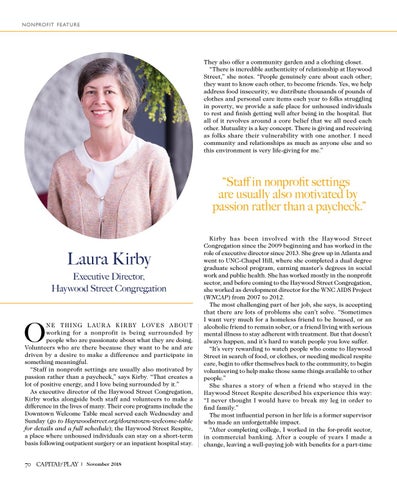 They also offer a community garden and a clothing closet. “There is incredible authenticity of relationship at Haywood Street,” she notes. “People genuinely care about each other; they want to know each other, to become friends. Yes, we help address food insecurity, we distribute thousands of pounds of clothes and personal care items each year to folks struggling in poverty, we provide a safe place for unhoused individuals to rest and finish getting well after being in the hospital. But all of it revolves around a core belief that we all need each other. Mutuality is a key concept. There is giving and receiving as folks share their vulnerability with one another. I need community and relationships as much as anyone else and so this environment is very life-giving for me.”

“Staff in nonprofit settings are usually also motivated by passion rather than a paycheck.”

N E TH I NG L AU R A K I R BY L OV E S A B OU T working for a nonprofit is being surrounded by people who are passionate about what they are doing. Volunteers who are there because they want to be and are driven by a desire to make a difference and participate in something meaningful. “Staff in nonprofit settings are usually also motivated by passion rather than a paycheck,” says Kirby. “That creates a lot of positive energy, and I love being surrounded by it.” As executive director of the Haywood Street Congregation, Kirby works alongside both staff and volunteers to make a difference in the lives of many. Their core programs include the Downtown Welcome Table meal served each Wednesday and Sunday (go to Haywoodstreet.org/downtown-welcome-table for details and a full schedule); the Haywood Street Respite, a place where unhoused individuals can stay on a short-term basis following outpatient surgery or an inpatient hospital stay. 70

K irby has been involved with the Haywood Street Congregation since the 2009 beginning and has worked in the role of executive director since 2013. She grew up in Atlanta and went to UNC-Chapel Hill, where she completed a dual degree graduate school program, earning master’s degrees in social work and public health. She has worked mostly in the nonprofit sector, and before coming to the Haywood Street Congregation, she worked as development director for the WNC AIDS Project (WNCAP) from 2007 to 2012. The most challenging part of her job, she says, is accepting that there are lots of problems she can’t solve. “Sometimes I want very much for a homeless friend to be housed, or an alcoholic friend to remain sober, or a friend living with serious mental illness to stay adherent with treatment. But that doesn’t always happen, and it’s hard to watch people you love suffer. “It’s very rewarding to watch people who come to Haywood Street in search of food, or clothes, or needing medical respite care, begin to offer themselves back to the community, to begin volunteering to help make those same things available to other people.” She shares a story of when a friend who stayed in the Haywood Street Respite described his experience this way: “I never thought I would have to break my leg in order to find family.” The most influential person in her life is a former supervisor who made an unforgettable impact. “After completing college, I worked in the for-profit sector, in commercial banking. After a couple of years I made a change, leaving a well-paying job with benefits for a part-time 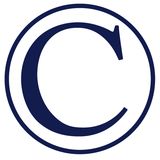