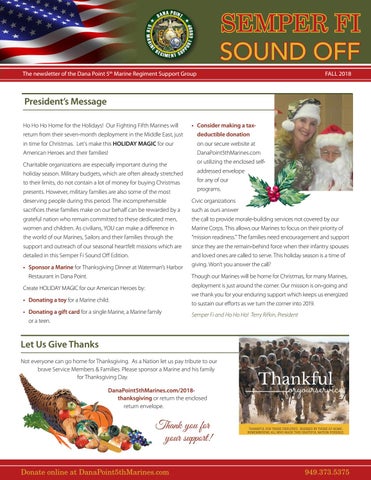 President’s Message Ho Ho Ho Home for the Holidays! Our Fighting Fifth Marines will return from their seven-month deployment in the Middle East, just in time for Christmas. Let’s make this HOLIDAY MAGIC for our American Heroes and their families! Charitable organizations are especially important during the holiday season. Military budgets, which are often already stretched to their limits, do not contain a lot of money for buying Christmas presents. However, military families are also some of the most deserving people during this period. The incomprehensible sacrifices these families make on our behalf can be rewarded by a grateful nation who remain committed to these dedicated men, women and children. As civilians, YOU can make a difference in the world of our Marines, Sailors and their families through the support and outreach of our seasonal heartfelt missions which are detailed in this Semper Fi Sound Off Edition. • Sponsor a Marine for Thanksgiving Dinner at Waterman’s Harbor Restaurant in Dana Point. Create HOLIDAY MAGIC for our American Heroes by: • Donating a toy for a Marine child. • Donating a gift card for a single Marine, a Marine family or a teen.

• Consider making a taxdeductible donation on our secure website at DanaPoint5thMarines.com or utilizing the enclosed selfaddressed envelope for any of our programs. Civic organizations such as ours answer the call to provide morale-building services not covered by our Marine Corps. This allows our Marines to focus on their priority of “mission readiness.” The families need encouragement and support since they are the remain-behind force when their infantry spouses and loved ones are called to serve. This holiday season is a time of giving. Won’t you answer the call? Though our Marines will be home for Christmas, for many Marines, deployment is just around the corner. Our mission is on-going and we thank you for your enduring support which keeps us energized to sustain our efforts as we turn the corner into 2019. Semper Fi and Ho Ho Ho! Terry Rifkin, President

Let Us Give Thanks Not everyone can go home for Thanksgiving. As a Nation let us pay tribute to our brave Service Members & Families. Please sponsor a Marine and his family for Thanksgiving Day. DanaPoint5thMarines.com/2018thanksgiving or return the enclosed return envelope.

Thank you for your support! Donate online at DanaPoint5thMarines.com

SEMPER FI SOUND OFF Brave Mamas Celebrate their New Babies The Dana Point Support Group planned something special for the Ladies of the 3rd Battalion 5th Marines and their babies yesterday. 15 Darkhorse Mamas were showered with a lovely lunch, fun games (the Dads really got into painting the onesies,) with lots of prizes and a HUGE baby basket filled with so many special goodies to take home. Congrats to our guests of honor and wishing them lots of memories ahead with their new little bundles of joy. Heartfelt appreciation goes to our generous Friends of the Fifth who contributed to make this day a wonderful one. Awesome DP5MRSG volunteers who made awesome yummy food, Additional thanks to Team Darkhorse volunteers, The Daughters of the American Revolution for all their gift basket contributions, San Clemente Knit Wits for the homemade knitted baby blankets, Heidelberg Bakery for the beautiful cake and the rest of the 3/5 planning committee.

Holiday Magic It’s time to create some holiday magic for our Marine families! Santa will be visiting the Regiment for their holiday party on December 20th and we hope his workshop will be filled with toys for the small children and lots of gift cards for our teens, single Marines and families. Here’s how you can help: Purchase a toy for a Military child and drop it off at any of these Dana Point locations: • Dana Point City Hall, 33282 Golden Lantern Street • Harbor Grill, 34499 Golden Lantern Street • Jacks Restaurant, 24462 Del Prado • Dana Point Chamber Office, 24681 La Plaza, Suite 115 • Coffee Importers, 34531 Golden Lantern Street • Laguna Cliffs Marriott Resort and Spa, 25135 Park Lantern • Dana Point Community Center, 34052 Del Obispo Street • Dana Wharf Sportfishing & Whale Watching, 34675 Street of the Golden Lantern • Casanova, 33585 Del Obispo Street • Niguel Shores Clubhouse, 33654 Niguel Shores Drive Donate to Operation Gift Cards for the holiday party for Marines and families. Gift cards are especially needed for our teens and single Marines.. Gift card suggestions: Target • Walmart • Amazon • Gas Cards Best Buy • Albertsons • Ralphs • Movie Tickets • Fast Food: McDonalds • Carls Jr. • Burger King You may purchase gift cards and mail them via the enclosed self-addressed envelope. Too busy to shop? You can visit our website at DanaPoint5thMarines.com and click on the “Holiday Magic” tab to make a secure, fully tax-deductible PayPal donation to support these needed Outreach efforts. With our Marines returning from deployment just in time for Christmas, our Marine families being together this Christmas is very important.

Thank you for your continued support!

From the Command Posts Greetings from Kuwait, Six months passed in a blur of activity since I last wrote. During that time the members of the Fighting Fifth who deployed with the Special Purpose Marine Air-Ground Task Force Central Command planned and conducted operations in rapid succession to contribute to the defeat of ISIS in northeast Syria, deter Russian and Government of Syria encroachment on coalition-controlled territory in southeast Syria, improve and sustain the performance of Iraqi and Afghan military units, and enhance the proficiency of our allies and partners around the region. We are doing what we trained and prepared to do. We remain proud to serve, especially while forward-deployed, and every day we strive to make a difference in challenging times. Your support matters since any deployment can feel like a long time, even when performing an important and fulfilling mission. Your letters, packages, thoughts, prayers, and care for our loved ones at home sustained us since we headed “over the sea.” We count on the same in the brief months until we “shove off for home.” Until then, thank you so much for everything you do for us. We are inspired and humbled by your example. Semper Fidelis, George C. Schreffler, III, Commanding Officer SPMAGTF-Crisis Response-Central Command, Al Jaber Air Base, Kuwait

Greetings from Camp Mateo, In the last six months, Fighting Fifth has been busy at home and abroad. 1st Battalion/5 Marines has begun its pre-deployment training in earnest as it focused on developing its small unit leaders leading up to a major battalion training exercise in 29 Palms in December. 2d Battalion 5th Marines deployed as the Battalion Landing Team for the 31st Marine Expeditionary Unit (MEU), the nation’s only forward deployed MEU based in Okinawa, Japan. While underway, the battalion successfully conducted humanitarian relief operations in support of our national security strategy. In September while steaming towards the US territory of Northern Central Marianas Islands (NCMI) consisting of Guam, Tinian, Rota, and Saipan for a large-scale naval exercise, Typhoon Mangkut, a category IV typhoon, struck the NCMI causing widespread damage. The battalion was called upon to

conduct relief operation on the island of Rota, known as the “friendliest island in the world” and cleared miles of debris along main supply routes, setting the conditions for FEMA to continue relief Col. George C. Schreffler, III, Forward Deployed operations. 2/5 eased the suffering our fellow American citizens had endured while also exhibiting the very best of what the Navy-Marine Corps team represents. 3rd Battalion/5th Marines is currently undergoing pre-deployment training as Battalion Landing Team for the 11th Marine Col. AJ Munro, Home Station Expeditionary Unit after completing a challenging readiness exercise in the summer aboard the Marine Corps Mountain Warfare Training Center in Bridgeport, California. 2d Battalion, 4th Marines completed a successful deployment to Darwin, Australia as part of the Marine Rotational Force – Darwin. 2/4 performed exceptionally well while conducting bi-lateral and joint training exercises with Australian and multi-national forces in order to build partnership capacity and provide a forward deployed presence in the Western Pacific. As we head into November and celebrate the 243rd birthday of our Corps, we pay tribute to all who have gone before and forged our legacy. We especially remember our Marines who fought and died in two of our most decorated battles, the Battle of Belleau Wood in World War I (100 year anniversary) and the “Tet Offensive” in Vietnam (50 year anniversary.) We recommit ourselves to honoring them and defending freedom in any clime or place. We look forward to celebrating with many of you during our birthday ball and thank you for your steadfast dedication to “The Regiment.” God Bless and Semper Fidelis, Colonel AJ Munro

Two New Directors at the Tip of the Spear Please welcome our new additions to the DP5MRSG Board of Directors. Jill Watson, Support and Outreach Director Born and raised in Vineland, New Jersey, Jill moved to Bass Lake, California in 1979 where she met her husband of 36 years. Jill and her husband moved to San Clemente in 1984 and purchased a home raising five children. Jill started her company, The Pampered Bride, a wedding planning business in 1994. She left the business in 2016 entering into semi-retirement so she and her husband could enjoy more travels. We brought Jill out of retirement to be the DP5MRSG Director of Support and Outreach for our Marines, Sailors and Families. Continued on page 4

Two New Directors at the Tip of the Spear, continued from page 3 Nick Frankovich, Camp Pendleton Base Projects Nick grew up in Ohio on Lake Erie where he learned to sail and gained a fondness for racing. He joined the Air Force right out of High school and became Crew Chief on the A-10 Thunderbolt. Nick finished up his Duty on the west coast and was drawn to San Clemente and Dana Point for the climate and proximity to the ocean. He has been here since 1983 and started his own business in 1987. Nick has always wanted a way to give thanks to the Marines for what they do for him and this country and believes this support group was the best way to do that. To date Nick has served on the DP5MRSG Advisory Brigade. Because of his expertise with construction, he has been indispensable already in “leading the way” tiling the Father Capodanno Chapel and working in conjunction with Marines and Contractors on the Base for Maintenance and Construction of approved projects.

Charity Regatta Benefits our Fighting Fifth DP5MRSG is deeply honored to be the recipients of the Dana Point Yacht Club’s 2018 Richard Henry Dana Charity Regatta. The hard work and generosity of the members and donors is overwhelming. This donation will allow us to create “Holiday Magic” for the homecoming for our Marines returning from the Middle East just in time for Christmas this year. We will take good care of our Marine children not only for the holidays but also with summer camp scholarships and other extracurricular activities throughout 2019. These funds will also provide opportunities for our recovering ill and combat injured Marines at Wounded Warrior Pictured left to right Sue Ward, Melissa Perdue, Dan Irha, Terry Rifkin, Bob Perdue Battalion West at Camp Pendleton. All this and so much more. This is the single largest donation that DP5MRSG has ever received and will allow us to expand our Support and Outreach to our Brave Defenders and families of the Fighting Fifth and beyond. With ZERO SALARIES, our Boots-on-the-Ground organization works so hard all year long to be able to accomplish our mission. Thank you to all the members of the DP Yacht Club and the Patriotic generous donors who truly made a difference!! Look for the Dana Point Yacht Club at the Presidential Level on our Companies for the Courageous Banner next year.