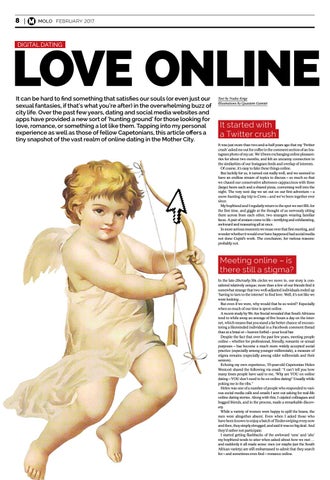 It can be hard to find something that satisfies our souls (or even just our sexual fantasies, if that’s what you’re after) in the overwhelming buzz of city life. Over the past few years, dating and social media websites and apps have provided a new sort of ‘hunting ground’ for those looking for love, romance, or something a lot like them. Tapping into my personal experience as well as those of fellow Capetonians, this article offers a tiny snapshot of the vast realm of online dating in the Mother City.

It started with a Twitter crush It was just more than two-and-a-half years ago that my ‘Twitter crush’ asked me out for coffee in the comment section of an Instagram photo of my cat. We’d been exchanging online pleasantries for about two months, and felt an uncanny connection in the similarities of our Instagram feeds and overlap of interests. Of course, it’s easy to fake these things online. But luckily for us, it turned out really well, and we seemed to have an endless stream of topics to discuss – so much so that we chased our conservative afternoon cappuccinos with three (large) beers each and a shared pizza, conversing well into the night. The very next day we set out on our first adventure – a snow-hunting day trip to Ceres – and we’ve been together ever since. My boyfriend and I regularly return to the spot we met IRL for the first time, and giggle at the thought of us nervously sitting there across from each other, two strangers wearing familiar faces. A pair of avatars come to life – terrifying and exhilarating, awkward and reassuring all at once. In more serious moments we muse over that first meeting, and wonder whether it would ever have happened had social media not done Cupid’s work. The conclusion, for various reasons: probably not.

Meeting online – is there still a stigma? In the late-20s/early-30s circles we move in, our story is considered relatively unique; more than a few of our friends find it somewhat strange that two well-adjusted individuals ended up ‘having to turn to the internet’ to find love. Well, it’s not like we were looking… But even if we were, why would that be so weird? Especially when so much of our time is spent online. A recent study by We Are Social revealed that South Africans tend to while away an average of five hours a day on the internet, which means that you stand a far better chance of encountering a likeminded individual in a Facebook comment thread than at a braai or – heaven forbid – your local bar. Despite the fact that over the past few years, meeting people online – whether for professional, friendly, romantic or sexual purposes – has become a much more widely accepted social practice (especially among younger millennials), a measure of stigma remains (especially among older millennials and their seniors). Echoing my own experience, 35-year-old Capetonian Helen Westcott shared the following via email: “I can’t tell you how many times people have said to me, ‘Why are YOU on online dating – YOU don’t need to be on online dating!’ Usually while poking me in the ribs.” Helen was one of a number of people who responded to various social media calls and emails I sent out asking for real-life online dating stories. Along with this, I cajoled colleagues and bugged friends, and in the process, made a remarkable discovery. While a variety of women were happy to spill the beans, the men were altogether absent. Even when I asked those who have been known to enjoy a batch of Tinder-swiping every now and then, they simply shrugged, and said it was no big deal. And they’d rather not participate. I started getting flashbacks of the awkward ‘ums’ and ‘ahs’ my boyfriend tends to utter when asked about how we met … and suddenly it all made sense: men (or maybe just the South African variety) are still embarrassed to admit that they search for – and sometimes even find – romance online. 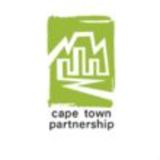 Molo: Digital Power to the People

In this edition of Molo we delve into Cape Town's complex digital space. Join us for an exploration of all things online - from homegrown in...

Molo: Digital Power to the People

In this edition of Molo we delve into Cape Town's complex digital space. Join us for an exploration of all things online - from homegrown in...