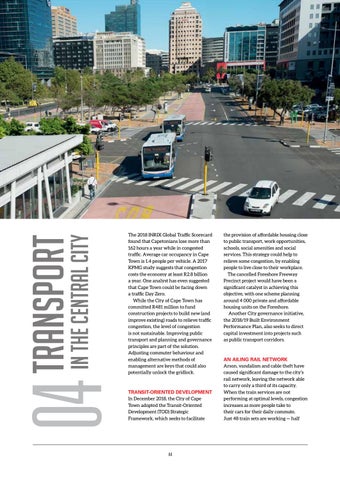 in the central city

The 2018 INRIX Global Traffic Scorecard found that Capetonians lose more than 162 hours a year while in congested traffic. Average car occupancy in Cape Town is 1.4 people per vehicle. A 2017 KPMG study suggests that congestion costs the economy at least R2.8 billion a year. One analyst has even suggested that Cape Town could be facing down a traffic Day Zero. While the City of Cape Town has committed R481 million to fund construction projects to build new (and improve existing) roads to relieve traffic congestion, the level of congestion is not sustainable. Improving public transport and planning and governance principles are part of the solution. Adjusting commuter behaviour and enabling alternative methods of management are keys that could also potentially unlock the gridlock.

TRANSIT-ORIENTED DEVELOPMENT In December 2018, the City of Cape Town adopted the Transit-Oriented Development (TOD) Strategic Framework, which seeks to facilitate

the provision of affordable housing close to public transport, work opportunities, schools, social amenities and social services. This strategy could help to relieve some congestion, by enabling people to live close to their workplace. The cancelled Foreshore Freeway Precinct project would have been a significant catalyst in achieving this objective, with one scheme planning around 4 000 private and affordable housing units on the Foreshore. Another City governance initiative, the 2018/19 Built Environment Performance Plan, also seeks to direct capital investment into projects such as public transport corridors.

AN AILING RAIL NETWORK Arson, vandalism and cable theft have caused significant damage to the cityâ&#x20AC;&#x2122;s rail network, leaving the network able to carry only a third of its capacity. When the train services are not performing at optimal levels, congestion increases as more people take to their cars for their daily commute. Just 48 train sets are working â&#x20AC;&#x201D; half