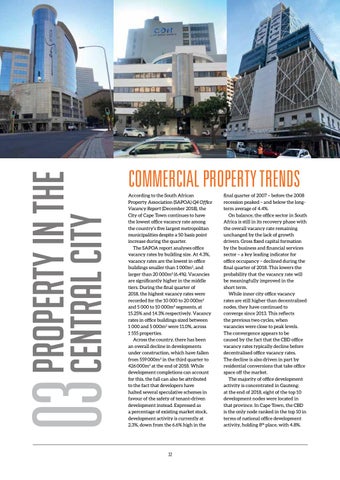 PROPERTY in the central city

COMMERCIAL PROPERTY TRENDS According to the South African Property Association (SAPOA) Q4 Office Vacancy Report (December 2018), the City of Cape Town continues to have the lowest office vacancy rate among the country’s five largest metropolitan municipalities despite a 50 basis point increase during the quarter. The SAPOA report analyses office vacancy rates by building size. At 4.3%, vacancy rates are the lowest in office buildings smaller than 1 000m2, and larger than 20 000m2 (6.4%). Vacancies are significantly higher in the middle tiers. During the final quarter of 2018, the highest vacancy rates were recorded for the 10 000 to 20 000m2 and 5 000 to 10 000m2 segments, at 15.25% and 14.3% respectively. Vacancy rates in office buildings sized between 1 000 and 5 000m2 were 11.0%, across 1 555 properties. Across the country, there has been an overall decline in developments under construction, which have fallen from 559 000m2 in the third quarter to 426 000m2 at the end of 2018. While development completions can account for this, the fall can also be attributed to the fact that developers have halted several speculative schemes in favour of the safety of tenant-driven development instead. Expressed as a percentage of existing market stock, development activity is currently at 2.3%, down from the 6.6% high in the

final quarter of 2007 – before the 2008 recession peaked – and below the longterm average of 4.4%. On balance, the office sector in South Africa is still in its recovery phase with the overall vacancy rate remaining unchanged by the lack of growth drivers. Gross fixed capital formation by the business and financial services sector – a key leading indicator for office occupancy – declined during the final quarter of 2018. This lowers the probability that the vacancy rate will be meaningfully improved in the short term. While inner city office vacancy rates are still higher than decentralised nodes, they have continued to converge since 2013. This reflects the previous two cycles, when vacancies were close to peak levels. The convergence appears to be caused by the fact that the CBD office vacancy rates typically decline before decentralised office vacancy rates. The decline is also driven in part by residential conversions that take office space off the market. The majority of office development activity is concentrated in Gauteng: at the end of 2018, eight of the top 10 development nodes were located in that province. In Cape Town, the CBD is the only node ranked in the top 10 in terms of national office development activity, holding 8th place, with 4.8%.