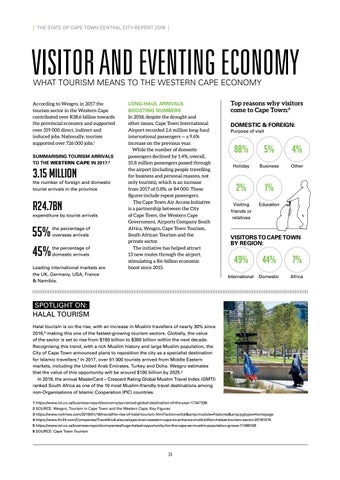 According to Wesgro, in 2017 the tourism sector in the Western Cape contributed over R38.6 billion towards the provincial economy and supported over 319 000 direct, indirect and induced jobs. Nationally, tourism supported over 726 000 jobs.1 SUMMARISING TOURISM ARRIVALS TO THE WESTERN CAPE IN 2017:2

the number of foreign and domestic tourist arrivals in the province

LONG-HAUL ARRIVALS BOOSTING NUMBERS In 2018, despite the drought and other issues, Cape Town International Airport recorded 2.6 million long-haul international passengers â&#x20AC;&#x201D; a 9.6% increase on the previous year. While the number of domestic passengers declined by 1.4%, overall, 10.8 million passengers passed through the airport (including people travelling for business and personal reasons, not only tourists), which is an increase from 2017 of 0.8%, or 84 000. These figures include repeat passengers. The Cape Town Air Access Initiative is a partnership between the City of Cape Town, the Western Cape Government, Airports Company South Africa, Wesgro, Cape Town Tourism, South African Tourism and the private sector. The initiative has helped attract 13 new routes through the airport, stimulating a R6-billion economic boost since 2015.

VISITORS TO CAPE TOWN BY REGION:

SPOTLIGHT ON:: HALAL TOURISM Halal tourism is on the rise, with an increase in Muslim travellers of nearly 30% since 2016,3 making this one of the fastest-growing tourism sectors. Globally, the value of the sector is set to rise from $180 billion to $300 billion within the next decade. Recognising this trend, with a rich Muslim history and large Muslim population, the City of Cape Town announced plans to reposition the city as a specialist destination for Islamic travellers.4 In 2017, over 81 000 tourists arrived from Middle Eastern markets, including the United Arab Emirates, Turkey and Doha. Wesgro estimates that the value of this opportunity will be around $100 billion by 2025.5 In 2018, the annual MasterCard â&#x20AC;&#x201C; Crescent Rating Global Muslim Travel Index (GMTI) ranked South Africa as one of the 10 most Muslim-friendly travel destinations among non-Organisations of Islamic Cooperation (PIC) countries. 1 https://www.iol.co.za/business-report/economy/sa-named-global-destination-of-the-year-17347336 2 SOURCE: Wesgro, Tourism in Cape Town and the Western Cape, Key Figures 3 https://www.nytimes.com/2019/01/18/travel/the-rise-of-halal-tourism.html?action=click&amp;module=Features&amp;pgtype=Homepage 4 https://www.fin24.com/Companies/TravelAndLeisure/cape-town-western-cape-to-enhance-multi-billion-halaal-tourism-sector-20181015 5 https://www.iol.co.za/business-report/companies/huge-halaal-opportunity-for-the-cape-as-muslim-population-grows-17489106 6 SOURCE: Cape Town Tourism