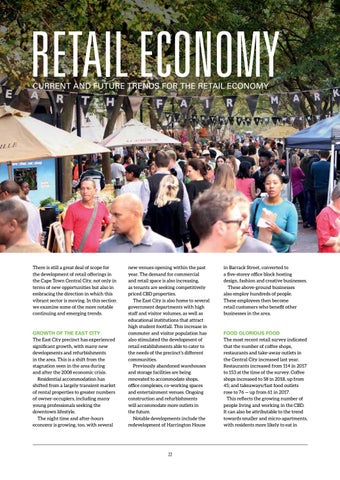 There is still a great deal of scope for the development of retail offerings in the Cape Town Central City, not only in terms of new opportunities but also in embracing the direction in which this vibrant sector is moving. In this section we examine some of the more notable continuing and emerging trends.

GROWTH OF THE EAST CITY The East City precinct has experienced significant growth, with many new developments and refurbishments in the area. This is a shift from the stagnation seen in the area during and after the 2008 economic crisis. Residential accommodation has shifted from a largely transient market of rental properties to greater numbers of owner-occupiers, including many young professionals seeking the downtown lifestyle. The night time and after-hours economy is growing, too, with several

new venues opening within the past year. The demand for commercial and retail space is also increasing, as tenants are seeking competitively priced CBD properties. The East City is also home to several government departments with high staff and visitor volumes, as well as educational institutions that attract high student footfall. This increase in commuter and visitor population has also stimulated the development of retail establishments able to cater to the needs of the precinctâ&#x20AC;&#x2122;s different communities. Previously abandoned warehouses and storage facilities are being renovated to accommodate shops, office complexes, co-working spaces and entertainment venues. Ongoing construction and refurbishments will accommodate more outlets in the future. Notable developments include the redevelopment of Harrington House

in Barrack Street, converted to a five-storey office block hosting design, fashion and creative businesses. These above-ground businesses also employ hundreds of people. These employees then become retail customers who benefit other businesses in the area.

FOOD GLORIOUS FOOD The most recent retail survey indicated that the number of coffee shops, restaurants and take-away outlets in the Central City increased last year. Restaurants increased from 114 in 2017 to 153 at the time of the survey. Coffee shops increased to 58 in 2018, up from 45; and takeaways/fast food outlets rose to 76 â&#x20AC;&#x201D; up from 61 in 2017. This reflects the growing number of people living and working in the CBD. It can also be attributable to the trend towards smaller and micro-apartments, with residents more likely to eat in