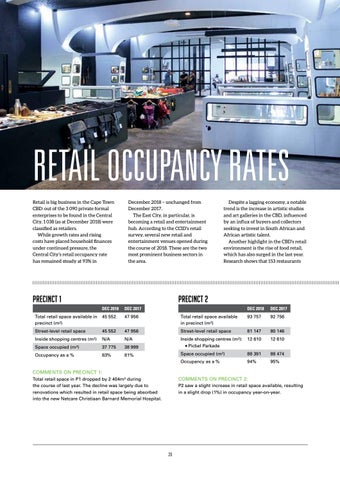 RETAIL OCCUPANCY RATES Retail is big business in the Cape Town CBD: out of the 3 090 private formal enterprises to be found in the Central City, 1 038 (as at December 2018) were classified as retailers. While growth rates and rising costs have placed household finances under continued pressure, the Central City’s retail occupancy rate has remained steady at 93% in

Despite a lagging economy, a notable trend is the increase in artistic studios and art galleries in the CBD, influenced by an influx of buyers and collectors seeking to invest in South African and African artistic talent. Another highlight in the CBD’s retail environment is the rise of food retail, which has also surged in the last year. Research shows that 153 restaurants

Space occupied (m²) Occupancy as a %

Total retail space in P1 dropped by 2 404m² during the course of last year. The decline was largely due to renovations which resulted in retail space being absorbed into the new Netcare Christiaan Barnard Memorial Hospital.