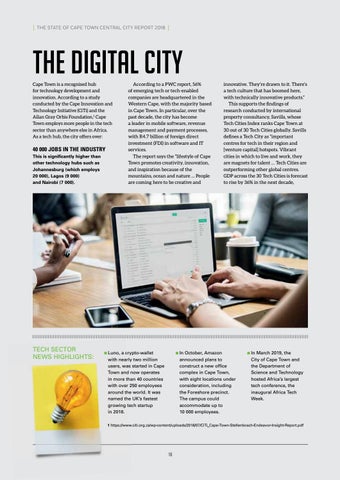 THE DIGITAL CITY Cape Town is a recognised hub for technology development and innovation. According to a study conducted by the Cape Innovation and Technology Initiative (CiTi) and the Allan Gray Orbis Foundation,1 Cape Town employs more people in the tech sector than anywhere else in Africa. As a tech hub, the city offers over:

According to a PWC report, 56% of emerging tech or tech-enabled companies are headquartered in the Western Cape, with the majority based in Cape Town. In particular, over the past decade, the city has become a leader in mobile software, revenue management and payment processes, with R4.7 billion of foreign direct investment (FDI) in software and IT services. The report says the “lifestyle of Cape Town promotes creativity, innovation, and inspiration because of the mountains, ocean and nature … People are coming here to be creative and

Luno, a crypto-wallet with nearly two million users, was started in Cape Town and now operates in more than 40 countries with over 250 employees around the world. It was named the UK’s fastest growing tech startup in 2018.

innovative. They’re drawn to it. There’s a tech culture that has boomed here, with technically innovative products.” This supports the findings of research conducted by international property consultancy, Savills, whose Tech Cities Index ranks Cape Town at 30 out of 30 Tech Cities globally. Savills defines a Tech City as “important centres for tech in their region and [venture capital] hotspots. Vibrant cities in which to live and work, they are magnets for talent … Tech Cities are outperforming other global centres. GDP across the 30 Tech Cities is forecast to rise by 36% in the next decade,

In October, Amazon announced plans to construct a new office complex in Cape Town, with eight locations under consideration, including the Foreshore precinct. The campus could accommodate up to 10 000 employees.

In March 2019, the City of Cape Town and the Department of Science and Technology hosted Africa’s largest tech conference, the inaugural Africa Tech Week.