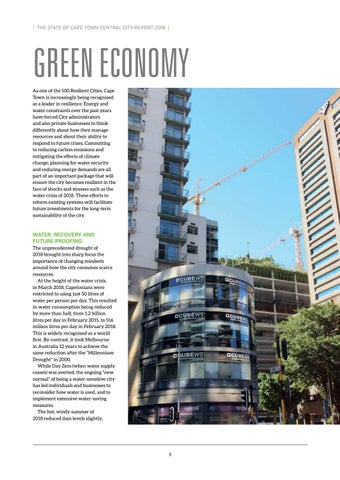 GREEN ECONOMY As one of the 100 Resilient Cities, Cape Town is increasingly being recognised as a leader in resilience. Energy and water constraints over the past years have forced City administrators and also private businesses to think differently about how they manage resources and about their ability to respond to future crises. Committing to reducing carbon emissions and mitigating the effects of climate change, planning for water security and reducing energy demands are all part of an important package that will ensure the city becomes resilient in the face of shocks and stresses such as the water crisis of 2018. These efforts to reform existing systems will facilitate future investments for the long-term sustainability of the city.

WATER: RECOVERY AND FUTURE-PROOFING The unprecedented drought of 2018 brought into sharp focus the importance of changing mindsets around how the city consumes scarce resources. At the height of the water crisis, in March 2018, Capetonians were restricted to using just 50 litres of water per person per day. This resulted in water consumption being reduced by more than half, from 1.2 billion litres per day in February 2015, to 516 million litres per day in February 2018. This is widely recognised as a world first. By contrast, it took Melbourne in Australia 12 years to achieve the same reduction after the “Millennium Drought” in 2000. While Day Zero (when water supply ceases) was averted, the ongoing “new normal” of being a water-sensitive city has led individuals and businesses to reconsider how water is used, and to implement extensive water-saving measures. The hot, windy summer of 2018 reduced dam levels slightly,