The Church on the Mall 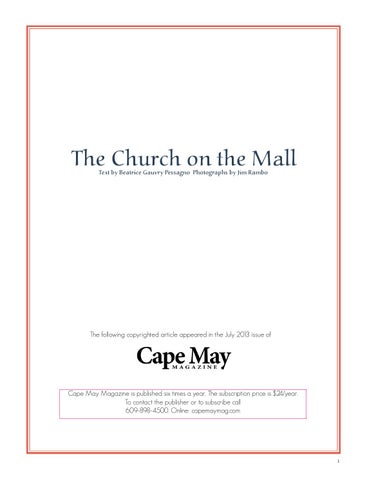 The following copyrighted article appeared in the July 2013 issue of

Cape May Magazine is published six times a year. The subscription price is $24/year. To contact the publisher or to subscribe call 609-898-4500. Online: capemaymag.com

n warm summer evenings patrons dining outside A Ca Mia Restaurant have one of the best views on the Washington Street Mall. From their tables, they can see both the beautiful exterior and interior of Our Lady Star of the Sea Church. Later, as night begins to fall, the church’s stained glass windows illuminate, come to life, and produce one of the most fantastic light shows in town. Few tourists and locals know that while enjoying their meal they are actually sitting on the very first location of what was once Saint Mary’s, the first Catholic church in town. Our Lady Star of the Sea had its genesis in Cape May in the living rooms of people who invited visiting clergy to say Mass. Eventually, in 1848, a small mission church dedicated as St. Mary’s became the first Roman Catholic Church in Cape May County. It was erected on the corner of Ocean and Washington streets, directly across from where the present Our Lady Star of the Sea stands. Saint Mary’s was a simple wooden structure that looked very much like the current St. Agnes Church in Cape May Point. Mass was offered there on Sundays during

the bathing season and once a month during the rest of the year. The first wedding took place on August 19, 1874 when Charles Shields and Marian Agnes Ryan married. In January 1878, the parish and church were incorporated under the name of The Church of Our Lady Star of the Sea. That same year, the Great Fire of 1878 destroyed most of the town, but the little wooden church which stood only a block away, survived. Soon after that, the Reverend Theophilus Degan purchased land directly across the street and the small church was moved to the northern corner of Washington Street. The building was remodeled with a steeple added and a large “B” note bell installed. That bell remains and still tolls today. Following the death of Father Degan in 1900, Father Dennis Kelly arrived. Throughout his first decade, he made many improvements to the original church, but his real ambition was to construct a new church in honor of Our Lady Star of the Sea. In April 1911, a contract was awarded to William J. McShane of Philadelphia to build that new church for $44,000. Contracts were awarded to George W. Reeves

Pictured is an architectural rendering of the new church in 1911. The rectory was not built as shown. It was later located in the rear and built to match the rest of the church. Postcard courtesy of Bob Elwell.

for the plumbing and Strang Electric of Philadelphia for the wiring. The cornerstone was consecrated and blessed July 16, 1911 and the work commenced. The construction would take two and one half years, but the church was not fully completed until 1918 at the final cost of $80,795. Specifications for the new church called for an exterior of grey granite with buff Indiana limestone trimmings. It is Gothic in style, but Romanesque round arches abound and exist comfortably with the angular Gothic lines. As the Reverend Thomas Magee, an associate at the parish, says, “From where I sit on the altar, I am amazed that all I see are arches. They are in the architecture, in the windows, the marble carvings – everywhere.” One of the most attractive features of the exterior is the bell tower which soars 80 feet high. It served as the entrance to the original baptistry and the choir loft. The main church features three altars; each is intricately carved from imported marble. The architecture presents more than 40 stained glass windows. Most portray the life of Christ, but some honor the patroness, Our Lady Star of the Sea. The main church accommodates 500 people and the basement church, 300. There was a morning chapel (now the sacristy) which had room for 40 people for small services.

During construction, parishioners continued to attend Mass in the frame building which by now had served the parish for over 65 years. Father Kelly moved the old church to the rear of the new construction site. Once the new church opened, Old Saint Mary’s functioned as a social hall (in 1919, a retired army barracks was attached) until it was demolished in 1970. Bishop James McFaul offered a Mass of Consecration in the new stone church on June 29, 1913. After that, masses continued to be said in the upper church during the summer and in the lower church during the winter. Heat didn’t arrive until 1950. Air conditioning followed 20 years later. With the new church successfully completed, priests who followed Father Kelly were charged with finishing the “parish plant.” Over the years, a school – a wooden pre-fab building with a steel frame purchased from Sears, Roebuck &amp; Co. – and a convent, purchased locally, were added to the property. Both were eventually demolished, and replaced by newer ones. The old rectory, built at the same time as Saint Mary’s was enlarged and demolished in 1959. The rectory was replaced with a building that matched the new church in design and color. As children attending Star of the Sea School, it seemed to us that each pastor was assigned a different mission. There were the fundraisers, followed by the builders, and

finally, the administrators, who effectively furthered the work. This cycle repeated itself right up to the major renovations of 1976 brought about by the Vatican II era. These would be the first changes in 60 years. The high altar, fashioned from Blanco B Italian marble, was cut from the same quarry used by Michelangelo. It was moved to the rear to accommodate a new, simpler table-like altar created from the same marble as the original. Its position allowed the priest to face the congregation who would now take a more active part in the liturgy. There were many other upgrades made to the church as the 1978 centennial of its incorporation approached. In the years following, Monsignors Patrick Madden, Timothy Ryan and Thomas McIntyre worked diligently to bring the church into the new millennium. With the exception of the several years when the church was covered in ivy, the exterior of Star of the Sea has barely changed. The interior, however, is another story. The look of the pews, floors, walls and ceiling has been altered many times over the years, so much so, that different looks are aligned with different decades in the church’s history. Long time parishioners, such as Vince Casale, proudly note that they date back to a time years ago when the ceiling was bright blue covered by a multitude of stars. “I will never forget it,” he says. “It was in the &#39;40s, and the first time that I had ever been in that church. And, I walked in, and there was that beautiful ceiling covered with stars…but, by the mid-&#39;50s, it was gone.” The inside of the original church was white in color, and after a period of pastel tones, was restored to this color by Monsignor Madden in the late 1980s. In 2007, a parish committee was formed by Monsignor McIntyre. Their decision was to repaint the church in the current aqua, cream and gold color scheme. The ceiling, now in subtle colors, is more of a background than when it was the center of attention. The unique interior beauty of the church, however, lies not in paint or other decorative touches or furnishings, but, rather, in the beautiful architecture, its cathedral-like essence, the Carrera marble and the magnificent stained glass windows. Manufactured over 100 years ago in Munich, Germany, 23 of these intricately designed, jewel toned windows depict various events in the life of Jesus, Mary and some of the saints. There are three exceptionally large windows dedicated to Mary. Two are located over the transepts and depict Mary’s Assumption and Coronation in Heaven. Over the balcony, presiding over the entire nave of the church, is the window honoring Our Lady Star of the Sea. It is this window which lends its light to the Mall. There are also 23 casements, which are more abstract in color and design than the others, located throughout the church.

The beauty of these windows is experienced best when light is dancing in or out of them and enhances the stories they tell. On the surface, biblical events are depicted. But the windows also tell a story of the parish and its deceased parishioners, many of whom, dead for over a century, live eternally through the stained glass donated in their memories. The names of the donors, forever etched on the windows, give us a glimpse into the parish’s character and universal appeal. Some of the donors were wealthy Catholics, while others were not – as evidenced by a casement window in the nave. It bears a most poignant inscription which reads, quite simply, Donated by the Help at the Hotel Cape May. One can only imagine the sacrifices the gift of this window entailed from the “Help.” Sadly these century-old storied windows – priceless works of art – are, according to current pastor Reverend Frank Danella, ”literally in danger of falling out.” The metal which holds them together is corroding, due to the sea air and other elements. They are being painstakingly restored at a cost of $1.2 million dollars. “The cost of replacing or purchasing these windows today would be prohibitive,” says Father Danella. “However, like all artistic treasures, they must be preserved. We have to do it.” While underway, the restoration project has been lengthy. It is moving in direct correlation to the amount of money raised. When the donations stop, so does the project.

Pictured above: A photograph of Our Lady Star of the Sea taken circa 1920. Photo courtesy of Joe Bogle. Standing almost in the exact same spot, Jim Rambo photographed the church in May, 2013. Not much has changed over the 90 plus years.

Some descendants of the original donors still belong to the parish. Sister Kay McTague, whose family has been here for generations, says, “There are so many of us out at the cemetery, but we are on the windows too. You know, the window of the Nativity was donated in memory of my great-aunt and uncle. And, we have a [family] casement in the lower church.” Our Lady of the Sea is universally rich in artistry and family history. It is here that so many of the parishioners have marked milestones of their lives and shed their tears of joy and sorrow. For over a century, the church has served as a beautiful tableau and source of comfort for the entire community. The Church of Our Lady Star of the Sea, often called “The Church on the Mall,” has been placed on the National Historic Registry. Its distinguished architectural and spiritual presence is a far cry from the little wooden building across the street. The Church, which stands majestically over the busy Mall, draws thousands of visitors each year who, for a moment, are able to escape into its medieval beauty. 

The Church on the Mall 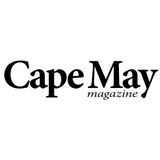