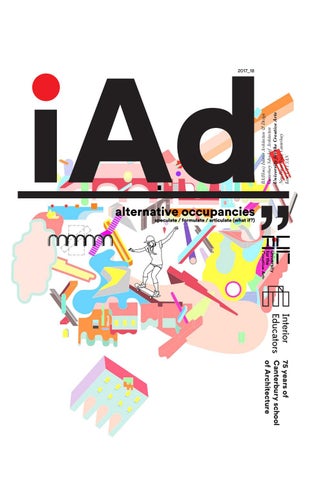 75 years of Canterbury school of Architecture

interior architecture + design Working with the ‘existing’ is fundamental to the practice of interior architecture and design. Whether it be on a large scale, such as the Tate Modern, or small scale like the interventions implemented under the umbrella of ‘Tactical Urbanism’, interior architecture and design practice oscillates somewhere between artefact and architecture. However, regardless of scale, both strategies explore the relationship between the old and the new through the process of reprogramming. It is the reworking of the ‘existing’ that makes interior architecture and design a fascinating and rewarding discipline to practice. As with any designer of the built environment, the interior architect has a social responsibility and therefore will design in response to the complexities of any given context. Making use of the humanities and social sciences, as well as the numerous design disciplines. Whether designing a structure, situation and/or event, the interior architect responds to how society interacts with, and inhabits space. Making it a human centered and narrative driven discipline that has the potential to explore new/alternative forms of occupancy. It is important to recognise that the designer addresses issues of creative and intellectual stimulation, to ensure design proposals stimulate the mind, as well as, the body. With this in mind, if interior architecture and design is to continue to thrive as a discipline, it is therefore essential that future designers are educated beyond the demands of the commercial realm and the clichéd image of TV make over shows. This paper documents just some of the cutting edge work produced across all three stages on the BA(Hons) iAd Course in Canterbury and clearly demonstrates that our students continue to produce work that is ambitious and provocative right from the outset. Rob Nice: Course Leader

stage one wearable architecture: amplifying the infra-ordinary Wearable Architecture was the first design brief of the year, encouraging students to develop a deep knowledge and understanding of place and peoples reaction and connection to it. The students were allocated a space along the length of Canterbury High Street and were required to map, remap, notate and devise new ways of perceiving, in an attempt at understanding and revealing the simplest of phenomena. architectural graft: the anatomy, idiosyncrasies + temperamnet of canterbury cathedral The second project was situated within the precincts of Canterbury Cathedral, a World Heritage Site at the heart of the City. Students began by focusing on the surveying of Canterbury Cathedral, where they explored, what Eugène Emmanuel Viollet-le-Duc might call, its ‘anatomy’, ‘idiosyncrasies and ‘temperament’, through a series of scale drawings; plans, sections and elevations (orthographic projection). rotunda radicals: propagating protest Taking their lead from the coffee houses that transformed themselves into the London Clubs and societies of the 1800’s, the students were required to develop a building that provided a series of spaces where political ideologies could be debated and discussed; with the aim of proposing a site of opposition and protest, informed by a response to the complex issues associated with coastal town regeneration, gentrification and ‘artwashing’. The project evolved over a seventeen week period that was broken down into three key phases; research through site survey and urban analysis; the second phase focused on design development through the use of modelling; and finally the third phase required the students to work on the representation of their design proposal through drawing and model making. Rob Nice: Stage One Convenor

As designers, we exist in a science fiction, we imagine a world where our dreams on paper are technically achieved. But what might the future feel like? Taste like? Often the future is postapocalyptic, manically sublime or mono-aesthetically sterile, but where will the robots sleep, and could there be thatch on Mars? We are ever more motivated by the myth of technological connection, but how do we relate to tactile experience in this glassy world? How do we keep spatial design connected to the natural? Can we save the bees? The first project in the second year of the course was a live build project, where students worked collaboratively, fabricating a large geodesic structure on the green at the heart of the Canterbury Campus. The second project of the year required students to design a sustainability cafe within the Greyfriars Gardens a Franciscian ‘Secret’ Garden in the heart of Canterbury’s historic city centre. Lucy Jones: Stage Two Convenor

Stage Three offers students the opportunity to undertake a self-initiated design project that lasts the entire year. During this process, students set their own agenda, conducting in-depth contextual research within a shared research theme. Students used storytelling as a means of developing and resolving a complex project, which provoked the students to question what a modern library might be, beyond the classification of books. Rob Nice: Stage Three Convenor

‘Relative Humidity’ refers to the amount of water vapor in the air, expressed as a percentage of the maximum amount the air could hold at the same temperature. When warm air is cooled, the RH goes up. When cold air is heated, the RH lowers.Cellulose, as the raw material of paper, is hygroscopic. This means it responds to changes in relative humidity by expanding when humidity levels are high and contracting when they are low. Paper has an attraction to water since it contains water on its surface and within its chemical structure. Surface water is eliminated first when RH is low. Once this supply is exhausted structural water is given up. High humidity can lead to insect activity, delamination, bleeding of watercolors, distortions, adhesions of coated paper, ink transfer and mold growth. Mold stains and weakens paper and leather. The 2011 Specification for Environmental Condition for Cultural Collection released by the British Standards Institute describes that below 25% RH, the risk of physical damage increases rapidly and at 75% RH and above. The recommended RH lies between 45-65% With an allowed fluctuation of ±5%. The safe RH boundary usually cited to prevent mould growth is below 65%, although 70% has also been cited. A tower with slots for books will go through two of the floors in the tower. Pools of water surround the tower. Steam will rise from the pools causing the pages of the books to warp.

Books are disected into three by the Kirkman leaders and taken to the decided tower floors.

direction and order of book deliiveries

Conceptual axonometric drawing not to scale

Conceptual section not to scale

Mary, do you know Heineken is in partnership with UK Human Library ?

Ya, I know. Heineken believe that the simple act of sitting down and having a conversation over a beer, helps bring people together so letâ&amp;#x20AC;&amp;#x2122;s cheers !

I am glad I know more about the refugee country and what he has been go through......

Check out this lady, she is wearing a gown !

May i know what time is the section for construction worker sharing ?

Dont worry Mr Leong and Mr Choong, I will take care of your kids.

Terry is waiting for you, son.

Hi James, are you excited for the school trip ?

REDEFINING THE STEREOTYPICAL CONCEPT OF A LIBRARY My library is a platform or bookshelf form by conversation between people that can challenge stereotypes and prejudices and using skip garden to reinforce the idea of Human Libray. In addition, keep the legacy of skip garden and function as a human library at the same time. Ordinary Human Library that just have table and chairs. In my opinion, Human Library venue can be more interesting and exciting for people to get more involve to it. REFERENCES freepik vecteezy

I am not sure, just be patient Dave. It is growing around us and with us :) I definitely will bring my kids here, they sure will have lots of fun !

I agree with you David, it’is not fair to stereotype them as the terrorist. but why there is so many terrorist attack in London ?

Ya, is a playground for them and explore new things and new friends :)

I am definitely going later, curious what is the reason he come here to work........

Terry, It doesn’t mean the attack was caused by muslim.

When will the construction beside skip garden will be done ? It is very noisy and disturbing.....

Lucas, are you guys going to the migrant worker section at 4pm later?

Ya, at least an informal place for us to chill out instead of just UAL facilities.

Ya, I think is interesting to do my work in an outdoor environment !

Terry, not every muslim is terrorist, you can’t judge a book by its cover......

I will get it done by this friday, Patrick. :)

Irene, have you done the Community Library timetable for next week ?

That is the nearest one, the name is Kings Cross Surgery.

I think here is a good place for us to chill and knowing new people as a student.

Mary, do you know Heineken is in partnership with UK Human Library ?

Heineken believe simple act of own and having a tion over a beer, ng people so let’s cheers !

You can come this community library, there is still spaces for gardening. :)

I will miss this place after skip garden was demolished......

Ya, I know. Heineken believe that the simple act of sitting down and having a conversation over a beer, helps bring people together so let’s cheers !

James, do you know Heineken is in partnership with UK Human Library ?

Ya, I know. Heineken believe that the simple act of sitting down and having a conversation over a beer, helps bring people together so let’s cheers !

How are you doing bro ?

Many thanks to: Heather Newton and the all at Canterbury Cathedral Andy Matthews Patrick Macklin

75 years of Canterbury school of Architecture

This paper documents just some of the cutting edge work produced across all three stages on the BA(Hons) iAd Course in Canterbury and clearly demonstrates that our students continue to produce work that is ambitious and provocative right from the outset.