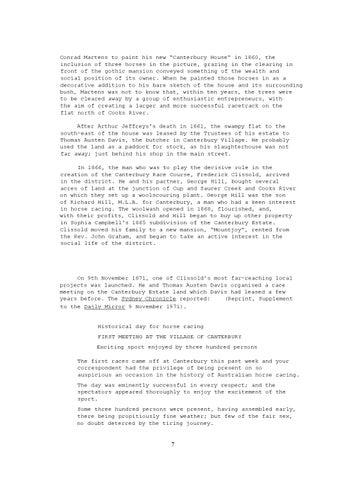 Conrad Martens to paint his new "Canterbury House" in 1860, the inclusion of three horses in the picture, grazing in the clearing in front of the gothic mansion conveyed something of the wealth and social position of its owner. When he painted those horses in as a decorative addition to his bare sketch of the house and its surrounding bush, Martens was not to know that, within ten years, the trees were to be cleared away by a group of enthusiastic entrepreneurs, with the aim of creating a larger and more successful racetrack on the flat north of Cooks River. After Arthur Jeffreys's death in 1861, the swampy flat to the south-east of the house was leased by the Trustees of his estate to Thomas Austen Davis, the butcher in Canterbury Village. He probably used the land as a paddock for stock, as his slaughterhouse was not far away; just behind his shop in the main street. In 1866, the man who was to play the decisive role in the creation of the Canterbury Race Course, Frederick Clissold, arrived in the district. He and his partner, George Hill, bought several acres of land at the junction of Cup and Saucer Creek and Cooks River on which they set up a woolscouring plant. George Hill was the son of Richard Hill, M.L.A. for Canterbury, a man who had a keen interest in horse racing. The woolwash opened in 1868, flourished, and, with their profits, Clissold and Hill began to buy up other property in Sophia Campbell's 1865 subdivision of the Canterbury Estate. Clissold moved his family to a new mansion, "Mountjoy", rented from the Rev. John Graham, and began to take an active interest in the social life of the district.

On 9th November 1871, one of Clissoldâ&#x20AC;&#x2122;s most far-reaching local projects was launched. He and Thomas Austen Davis organised a race meeting on the Canterbury Estate land which Davis had leased a few years before. The Sydney Chronicle reported: (Reprint, Supplement to the Dajly Mirror 9 November 1971).

Historical day for horse racing FIRST MEETING AT THE VILLAGE OF CANTERBURY Exciting sport enjoyed by three hundred persons The first races came off at Canterbury this past week and your correspondent had the privilege of being present on so auspicious an occasion in the history of Australian horse racing. The day was eminently successful in every respect; and the spectators appeared thoroughly to enjoy the excitement of the sport. Some three hundred persons were present, having assembled early, there being propitiously fine weather; but few of the fair sex, no doubt deterred by the tiring journey. 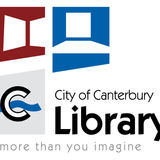 This book was prepared to celebrate Heritage Week 1985, and it tells the story of an integral part of the heritage of Canterbury: Canterbury...

This book was prepared to celebrate Heritage Week 1985, and it tells the story of an integral part of the heritage of Canterbury: Canterbury...