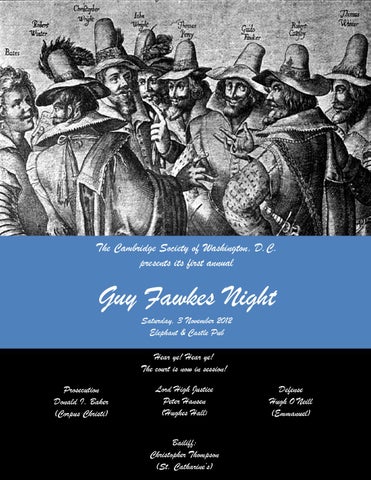 The Cambridge Society of Washington, D.C. presents its first annual

Guy Fawkes Night: A Brief History The decades following King Henry VIII’s break from the Catholic Church proved a tumultuous time in British history, as the nation struggled to define itself in a world in flux. On the continent, the religious and political identity of Europe remained rent between Martin Luther’s Protestant Reformation and the Catholic Church’s Counter-Reformation. After the brief and violent reign of Henry’s daughter, Queen Mary I (“Bloody Mary”), who had tried to realign England with the Catholic Church, Queen Elizabeth I firmly established England as a Protestant nation, an identity seemingly sealed by Britain’s victory over the Spanish Armada in 1588. Elizabeth’s successor, King James I, largely continued her religious policies. In 1605, Robert Catesby, an English Catholic, devised a plot to kill King James I, the royal family, and much of the Protestant aristocracy by bombing the November 5th State Opening of Parliament. He would then kidnap the king’s daughter, Princess Elizabeth, and install her as a Catholic queen. Known as the Gunpowder Plot, it was foiled by an anonymous letter sent to one of the Opening’s participants. On 4 November, a man named Guido Fawkes was found in the House of Lords with several barrels of gunpowder. He and twelve others, including Catesby, were arrested and later executed. Since then, the English have celebrated the plot’s failure with bonfires, fireworks, and other activities on November 5th of each year. Many questions continue to surround Guy Fawkes’ involvement in the plot, especially given that his confession was likely elicited by torture. Some have argued that he had no role in the plot at all. Tonight, we offer Fawkes a re-trial based on the many facts that have since come to light. Was he really a conspirator? Could he have received a fair trial in the anti-Catholic fervor of the early seventeenth century? Or was he merely a hapless scapegoat of Protestant hysteria, killed to satiate the English public’s fear of a return to Catholicism? Are there parallels between this “war on Catholicism” and today’s “War on Terror”? We’ll let you decide!

Halibut and Chips A 50-oz. fillet dipped in homemade beer batter and fried to a golden crisp. Served with English chips, tartar sauce, and coleslaw.

Castle Stir-Fry (Choice of Chicken or Veggie) A medley of fresh mixed vegetables, cashews, and water chestnuts tossed in a tangy teriyaki sauce and served atop jasmine rice with crispy wontons and sesame seeds.

Steak and Chips A 10-oz. sirloin steak grilled to your liking. With English chips and baked beans.

Fresh sliced chicken breast sautéed in whiskey mushroom sauce and served in a skillet with a sprig of thyme. Served with mashed potatoes and garlic green beans. 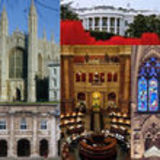