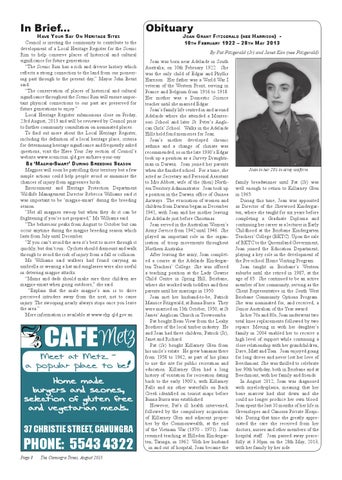 Have Your Say On Heritage Sites Council is inviting the community to contribute to the development of a Local Heritage Register for the Scenic Rim to help conserve places of historical and cultural significance for future generations. “The Scenic Rim has a rich and diverse history which reflects a strong connection to the land from our pioneering past through to the present day,” Mayor John Brent said. “The conservation of places of historical and cultural significance throughout the Scenic Rim will ensure important physical connections to our past are preserved for future generations to enjoy.” Local Heritage Register submissions close on Friday, 23rd August, 2013 and will be reviewed by Council prior to further community consultation on nominated places. To find out more about the Local Heritage Register, including the definition of a local heritage place, criteria for determining heritage significance and frequently asked questions, visit the Have Your Say section of Council’s website www.scenicrim.qld.gov.au/have-your-say. Be ‘Magpie-Smart’ During Breeding Season Magpies will soon be patrolling their territory but a few simple actions could help people avoid or minimise the chances of injury from aggressive birds. Environment and Heritage Protection Department Wildlife Management Director Rebecca Williams said it was important to be ‘magpie-smart’ during the breeding season. “Not all magpies swoop but when they do it can be frightening if you’re not prepared,” Ms Williams said. “The behaviour peaks from August to October but can occur anytime during the magpie breeding season which lasts from July until December. “If you can’t avoid the area it’s best to move through it quickly, but don’t run. Cyclists should dismount and walk through to avoid the risk of injury from a fall or collision. Ms Williams said walkers had found carrying an umbrella or wearing a hat and sunglasses were also useful in deterring magpie attacks. “Mums and dads should make sure their children are magpie-smart when going outdoors,” she said. “Explain that the male magpie’s aim is to drive perceived intruders away from the nest, not to cause injury. The swooping nearly always stops once you leave the area.” More information is available at www.ehp.qld.gov.au.

Meet at Metz a popular place to be! Home made burgers and scones, selection of gluten free and vegetarian meals. 37 CHRISTIE STREET, CANUNGRA

Joan was born near Adelaide in South Australia, on 10th February 1922. She was the only child of Edgar and Phyllis Harrison. Her father was a World War I veteran of the Western Front, serving in France and Belgium from 1916 to 1918. Her mother was a Domestic Science teacher until she married Edgar. Joan’s family life centred in and around Adelaide where she attended a Montessori School and later St. Peter’s Anglican Girls’ School. Walks in the Adelaide Hills held fond memories for Joan. Joan’s mother developed chronic asthma and a change of climate was recommended, so in the late 1930’s Edgar took up a position as a Survey Draughtsman in Darwin. Joan joined her parents when she finished school. For a time, she acted as Secretary and Personal Assistant to Mrs Abbott, wife of the (then) Northern Territory Administrator. Joan took up a position in the Darwin office of Guinea Airways . The evacuation of women and children from Darwin began in December 1941, with Joan and her mother leaving for Adelaide just before Christmas. Joan served in the Australian Women’s Army Service from 1942 until 1946. She played an important role in the organisation of troop movements throughout Northern Australia. After leaving the army, Joan completed a course at the Adelaide Kindergarten Teachers’ College. She was offered a teaching position at the Lady Gowrie Child Centre in Spring Hill, Brisbane, where she worked with toddlers and their parents until her marriage in 1950. Joan met her husband-to-be, Patrick Maurice Fitzgerald, at Binna Burra. They were married on 11th October, 1950, at St James’ Anglican Church in Toowoomba. Pat bought Beau View from the Leahy Brothers of the local timber industry. He and Joan had three children; Patrick (Jr), Janet and Richard. Pat (Sr) bought Killarney Glen from his uncle’s estate. He grew bananas there from 1958 to 1962, as part of his plans to use the site for public recreation and education. Killarney Glen had a long history of visitation for recreation dating back to the early 1900’s, with Killarney Falls and six other waterfalls on Back Creek identified on tourist maps before Binna Burra was established. However, Pat’s ill health intervened, followed by the compulsory acquisition of Killarney Glen and adjacent properties by the Commonwealth, at the end of the Vietnam War (1970 - 1971). Joan resumed teaching at Hillsdon Kindergarten, Taringa, in 1962. With her husband in and out of hospital, Joan became the

Joan in her 20’s in army uniform

family breadwinner until Pat (Sr) was well enough to return to Killarney Glen in 1965. During this time, Joan was appointed as Director of the Sherwood Kindergarten, where she taught for six years before completing a Graduate Diploma and continuing her career as a lecturer in Early Childhood at the Brisbane Kindergarten Teachers’ College (BKTC). Upon the sale of BKTC to the Queensland Government, Joan joined the Education Department, playing a key role in the development of the Pre-school Home Visiting Program. Joan taught in Brisbane’s Western suburbs until she retired in 1987, at the age of 65. She continued to be an active member of her community, serving as the Client Representative in the South West Brisbane Community Options Program. She was nominated for, and received, a Senior Australian of the Year award. In her 70s and 80s, Joan underwent two total knee replacements followed by two repairs. Moving in with her daughter’s family in 2004 enabled her to receive a high level of support while continuing a close relationship with her grandchildren, Dave, Matt and Tom. Joan enjoyed going for long drives and never lost her love of Beechmont. She was thrilled to celebrate her 90th birthday, both in Brisbane and at Beechmont, with her family and friends. In August 2012, Joan was diagnosed with myelodysplasia, meaning that her bone marrow had shut down and she could no longer produce her own blood. Joan spent the last 10 months of her life in Greenslopes and Canossa Private Hospitals. During that time she greatly appreciated the care she received from her doctors, nurses and other members of the hospital staff. Joan passed away peacefully at 3.30pm on the 28th May, 2013, with her family by her side. 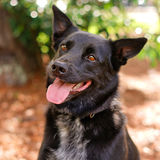