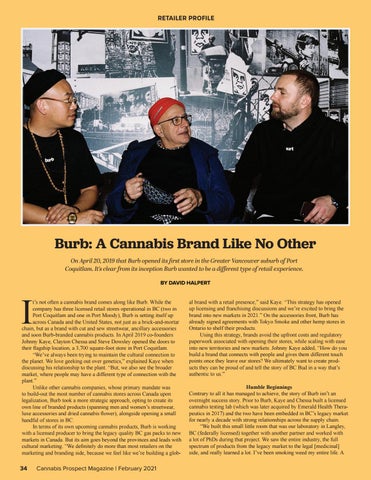 Burb: A Cannabis Brand Like No Other On April 20, 2019 that Burb opened its first store in the Greater Vancouver suburb of Port Coquitlam. It’s clear from its inception Burb wanted to be a different type of retail experience. BY DAVID HALPERT

t’s not often a cannabis brand comes along like Burb. While the company has three licensed retail stores operational in BC (two in Port Coquitlam and one in Port Moody), Burb is setting itself up across Canada and the United States, not just as a brick-and-mortar chain, but as a brand with cut and sew streetwear, ancillary accessories and soon Burb-branded cannabis products. In April 2019 co-founders Johnny Kaye, Clayton Chessa and Steve Dowsley opened the doors to their flagship location, a 3,700 square-foot store in Port Coquitlam. “We’ve always been trying to maintain the cultural connection to the planet. We love geeking out over genetics,” explained Kaye when discussing his relationship to the plant. “But, we also see the broader market, where people may have a different type of connection with the plant.” Unlike other cannabis companies, whose primary mandate was to build-out the most number of cannabis stores across Canada upon legalization, Burb took a more strategic approach, opting to create its own line of branded products (spanning men and women’s streetwear, luxe accessories and dried cannabis flower), alongside opening a small handful of stores in BC. In terms of its own upcoming cannabis products, Burb is working with a licensed producer to bring the legacy quality BC gas packs to new markets in Canada. But its aim goes beyond the provinces and leads with cultural marketing. “We definitely do more than most retailers on the marketing and branding side, because we feel like we’re building a glob-

al brand with a retail presence,” said Kaye. “This strategy has opened up licensing and franchising discussions and we’re excited to bring the brand into new markets in 2021.” On the accessories front, Burb has already signed agreements with Tokyo Smoke and other hemp stores in Ontario to shelf their products. Using this strategy, brands avoid the upfront costs and regulatory paperwork associated with opening their stores, while scaling with ease into new territories and new markets. Johnny Kaye added, “How do you build a brand that connects with people and gives them different touch points once they leave our stores? We ultimately want to create products they can be proud of and tell the story of BC Bud in a way that’s authentic to us.” Humble Beginnings Contrary to all it has managed to achieve, the story of Burb isn’t an overnight success story. Prior to Burb, Kaye and Chessa built a licensed cannabis testing lab (which was later acquired by Emerald Health Therapeutics in 2017) and the two have been embedded in BC’s legacy market for nearly a decade with strong relationships across the supply chain. “We built this small little room that was our laboratory in Langley, BC (federally licensed) together with another partner and worked with a lot of PhDs during that project. We saw the entire industry, the full spectrum of products from the legacy market to the legal [medicinal] side, and really learned a lot. I’ve been smoking weed my entire life. A