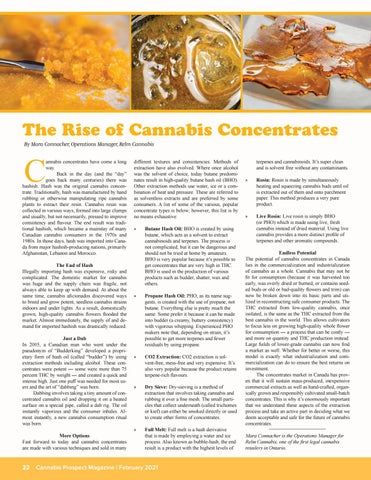 annabis concentrates have come a long way. Back in the day (and the “day” goes back many centuries) there was hashish. Hash was the original cannabis concentrate. Traditionally, hash was manufactured by hand rubbing or otherwise manipulating ripe cannabis plants to extract their resin. Cannabis resin was collected in various ways, formed into large clumps and usually, but not necessarily, pressed to improve consistency and flavour. The end result was traditional hashish, which became a mainstay of many Canadian cannabis consumers in the 1970s and 1980s. In those days, hash was imported into Canada from major hashish-producing nations, primarily Afghanistan, Lebanon and Morocco. The End of Hash Illegally importing hash was expensive, risky and complicated. The domestic market for cannabis was huge and the supply chain was fragile, not always able to keep up with demand. At about the same time, cannabis aficionados discovered ways to breed and grow potent, seedless cannabis strains indoors and under lights. As a result, domestically grown, high-quality cannabis flowers flooded the market. Almost immediately, the supply of and demand for imported hashish was drastically reduced. Just a Dab In 2005, a Canadian man who went under the pseudonym of “Budderking” developed a proprietary form of hash oil (called “budder”) by using extraction methods including alcohol. These concentrates were potent — some were more than 75 percent THC by weight — and created a quick and intense high. Just one puff was needed for most users and the art of “dabbing” was born. Dabbing involves taking a tiny amount of concentrated cannabis oil and dropping it on a heated surface on a special pipe, called a dab rig. The oil instantly vaporizes and the consumer inhales. Almost instantly, a new cannabis consumption ritual was born. More Options Fast forward to today and cannabis concentrates are made with various techniques and sold in many

different textures and consistencies. Methods of extraction have also evolved. Where once alcohol was the solvent of choice, today butane predominates result in high-quality butane hash oil (BHO). Other extraction methods use water, ice or a combination of heat and pressure. These are referred to as solventless extracts and are preferred by some consumers. A list of some of the various, popular concentrate types is below; however, this list is by no means exhaustive: »»

Butane Hash Oil: BHO is created by using butane, which acts as a solvent to extract cannabinoids and terpenes. The process is not complicated, but it can be dangerous and should not be tried at home by amateurs. BHO is very popular because it’s possible to get concentrates that are very high in THC. BHO is used in the production of various products such as budder, shatter, wax and others.

Propane Hash Oil: PHO, as its name suggests, is created with the use of propane, not butane. Everything else is pretty much the same. Some prefer it because it can be made into budder (a creamy, buttery consistency) with vigorous whipping. Experienced PHO makers note that, depending on strain, it’s possible to get more terpenes and fewer residuals by using propane.

Dry Sieve: Dry-sieving is a method of extraction that involves taking cannabis and rubbing it over a fine mesh. The small particles that collect underneath (called trichomes or kief) can either be smoked directly or used to create other forms of concentrates.

Full Melt: Full melt is a hash derivative that is made by employing a water and ice process. Also known as bubble-hash, the end result is a product with the highest levels of

terpenes and cannabinoids. It’s super clean and is solvent free without any contaminants. »»

Rosin: Rosin is made by simultaneously heating and squeezing cannabis buds until oil is extracted out of them and onto parchment paper. This method produces a very pure product.

Live Rosin: Live rosin is simply BHO (or PHO) which is made using live, fresh cannabis instead of dried material. Using live cannabis provides a more distinct profile of terpenes and other aromatic compounds.

Endless Potential The potential of cannabis concentrates in Canada lies in the commercialization and industrialization of cannabis as a whole. Cannabis that may not be fit for consumption (because it was harvested too early, was overly dried or burned, or contains seeded buds or old or bad-quality flowers and trim) can now be broken down into its basic parts and utilized in reconstructing safe consumer products. The THC extracted from low-quality cannabis, once isolated, is the same as the THC extracted from the best cannabis in the world. This allows cultivators to focus less on growing high-quality whole flower for consumption — a process that can be costly — and more on quantity and THC production instead. Large fields of lower-grade cannabis can now find a market as well. Whether for better or worse, this model is exactly what industrialization and commercialization can do to ensure the best returns on investment. The concentrates market in Canada has proven that it will sustain mass-produced, inexpensive commercial extracts as well as hand-crafted, organically grown and responsibly cultivated small-batch concentrates. This is why it’s enormously important that we understand these aspects of the extraction process and take an active part in deciding what we deem acceptable and safe for the future of cannabis concentrates. Mara Connacher is the Operations Manager for Relm Cannabis, one of the first legal cannabis retailers in Ontario.