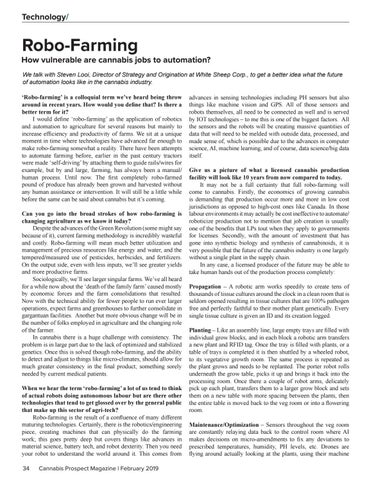 How vulnerable are cannabis jobs to automation? We talk with Steven Looi, Director of Strategy and Origination at White Sheep Corp., to get a better idea what the future of automation looks like in the cannabis industry. ‘Robo-farming’ is a colloquial term we’ve heard being throw around in recent years. How would you define that? Is there a better term for it? I would define ‘robo-farming’ as the application of robotics and automation to agriculture for several reasons but mainly to increase efficiency and productivity of farms. We sit at a unique moment in time where technologies have advanced far enough to make robo-farming somewhat a reality. There have been attempts to automate farming before, earlier in the past century tractors were made ‘self-driving’ by attaching them to guide rails/wires for example, but by and large, farming, has always been a manual/ human process. Until now. The first completely robo-farmed pound of produce has already been grown and harvested without any human assistance or intervention. It will still be a little while before the same can be said about cannabis but it’s coming. Can you go into the broad strokes of how robo-farming is changing agriculture as we know it today? Despite the advances of the Green Revolution (some might say because of it), current farming methodology is incredibly wasteful and costly. Robo-farming will mean much better utilization and management of precious resources like energy and water, and the tempered/measured use of pesticides, herbicides, and fertilizers. On the output side, even with less inputs, we’ll see greater yields and more productive farms. Sociologically, we’ll see larger singular farms. We’ve all heard for a while now about the ‘death of the family farm’ caused mostly by economic forces and the farm consolidations that resulted. Now with the technical ability for fewer people to run ever larger operations, expect farms and greenhouses to further consolidate in gargantuan facilities. Another but more obvious change will be in the number of folks employed in agriculture and the changing role of the farmer. In cannabis there is a huge challenge with consistency. The problem is in large part due to the lack of optimized and stabilized genetics. Once this is solved though robo-farming, and the ability to detect and adjust to things like micro-climates, should allow for much greater consistency in the final product; something sorely needed by current medical patients. When we hear the term ‘robo-farming’ a lot of us tend to think of actual robots doing autonomous labour but are there other technologies that tend to get glossed over by the general public that make up this sector of agri-tech? Robo-farming is the result of a confluence of many different maturing technologies. Certainly, there is the robotics/engineering piece, creating machines that can physically do the farming work; this goes pretty deep but covers things like advances in material science, battery tech, and robot dexterity. Then you need your robot to understand the world around it. This comes from 34

advances in sensing technologies including PH sensors but also things like machine vision and GPS. All of those sensors and robots themselves, all need to be connected as well and is served by IOT technologies – to me this is one of the biggest factors. All the sensors and the robots will be creating massive quantities of data that will need to be melded with outside data, processed, and made sense of, which is possible due to the advances in computer science, AI, machine learning, and of course, data science/big data itself. Give us a picture of what a licensed cannabis production facility will look like 10 years from now compared to today. It may not be a full certainty that full robo-farming will come to cannabis. Firstly, the economics of growing cannabis is demanding that production occur more and more in low cost jurisdictions as opposed to high-cost ones like Canada. In those labour environments it may actually be cost ineffective to automate/ roboticize production not to mention that job creation is usually one of the benefits that LPs tout when they apply to governments for licenses. Secondly, with the amount of investment that has gone into synthetic biology and synthesis of cannabinoids, it is very possible that the future of the cannabis industry is one largely without a single plant in the supply chain. In any case, a licensed producer of the future may be able to take human hands out of the production process completely: Propagation – A robotic arm works speedily to create tens of thousands of tissue cultures around the clock in a clean room that is seldom opened resulting in tissue cultures that are 100% pathogen free and perfectly faithful to their mother plant genetically. Every single tissue culture is given an ID and its creation logged. Planting – Like an assembly line, large empty trays are filled with individual grow blocks, and in each block a robotic arm transfers a new plant and RFID tag. Once the tray is filled with plants, or a table of trays is completed it is then shuttled by a wheeled robot, to its vegetative growth room. The same process is repeated as the plant grows and needs to be replanted. The porter robot rolls underneath the grow table, picks it up and brings it back into the processing room. Once there a couple of robot arms, delicately pick up each plant, transfers them to a larger grow block and sets them on a new table with more spacing between the plants, then the entire table is moved back to the veg room or into a flowering room. Maintenance/Optimization – Sensors throughout the veg room are constantly relaying data back to the control room where AI makes decisions on micro-amendments to fix any deviations to prescribed temperatures, humidity, PH levels, etc. Drones are flying around actually looking at the plants, using their machine

Cannabis Prospect Magazine is Canada’s premier trade publication for cannabis industry professionals. With six issues to be printed and dist...

Cannabis Prospect Magazine is Canada’s premier trade publication for cannabis industry professionals. With six issues to be printed and dist...