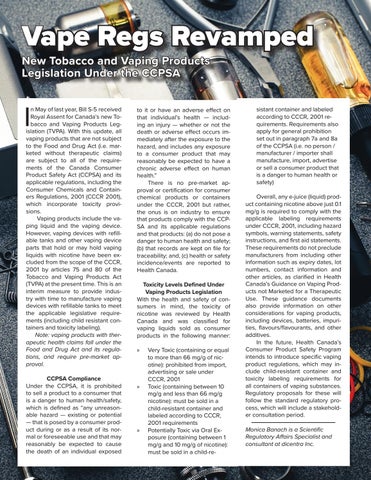 n May of last year, Bill S-5 received Royal Assent for Canada’s new Tobacco and Vaping Products Legislation (TVPA). With this update, all vaping products that are not subject to the Food and Drug Act (i.e. marketed without therapeutic claims) are subject to all of the requirements of the Canada Consumer Product Safety Act (CCPSA) and its applicable regulations, including the Consumer Chemicals and Containers Regulations, 2001 (CCCR 2001), which incorporate toxicity provisions. Vaping products include the vaping liquid and the vaping device. However, vaping devices with refillable tanks and other vaping device parts that hold or may hold vaping liquids with nicotine have been excluded from the scope of the CCCR, 2001 by articles 75 and 80 of the Tobacco and Vaping Products Act (TVPA) at the present time. This is an interim measure to provide industry with time to manufacture vaping devices with refillable tanks to meet the applicable legislative requirements (including child resistant containers and toxicity labeling). Note: vaping products with therapeutic health claims fall under the Food and Drug Act and its regulations, and require pre-market approval. CCPSA Compliance Under the CCPSA, it is prohibited to sell a product to a consumer that is a danger to human health/safety, which is defined as “any unreasonable hazard — existing or potential — that is posed by a consumer product during or as a result of its normal or foreseeable use and that may reasonably be expected to cause the death of an individual exposed

to it or have an adverse effect on that individual’s health — including an injury — whether or not the death or adverse effect occurs immediately after the exposure to the hazard, and includes any exposure to a consumer product that may reasonably be expected to have a chronic adverse effect on human health.” There is no pre-market approval or certification for consumer chemical products or containers under the CCCR, 2001 but rather, the onus is on industry to ensure that products comply with the CCPSA and its applicable regulations and that products: (a) do not pose a danger to human health and safety; (b) that records are kept on file for traceability; and, (c) health or safety incidence/events are reported to Health Canada. Toxicity Levels Defined Under Vaping Products Legislation With the health and safety of consumers in mind, the toxicity of nicotine was reviewed by Health Canada and was classified for vaping liquids sold as consumer products in the following manner: »»

sistant container and labeled according to CCCR, 2001 requirements. Requirements also apply for general prohibition set out in paragraph 7a and 8a of the CCPSA (i.e. no person / manufacturer / importer shall manufacture, import, advertise or sell a consumer product that is a danger to human health or safety) Overall, any e-juice (liquid) product containing nicotine above just 0.1 mg/g is required to comply with the applicable labeling requirements under CCCR, 2001, including hazard symbols, warning statements, safety instructions, and first aid statements. These requirements do not preclude manufacturers from including other information such as expiry dates, lot numbers, contact information and other articles, as clarified in Health Canada’s Guidance on Vaping Products not Marketed for a Therapeutic Use. These guidance documents also provide information on other considerations for vaping products, including devices, batteries, impurities, flavours/flavourants, and other additives. In the future, Health Canada’s Consumer Product Safety Program intends to introduce specific vaping product regulations, which may include child-resistant container and toxicity labeling requirements for all containers of vaping substances. Regulatory proposals for these will follow the standard regulatory process, which will include a stakeholder consultation period. Monica Banach is a Scientific Regulatory Affairs Specialist and consultant at dicentra Inc. 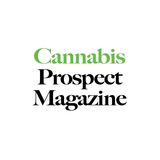