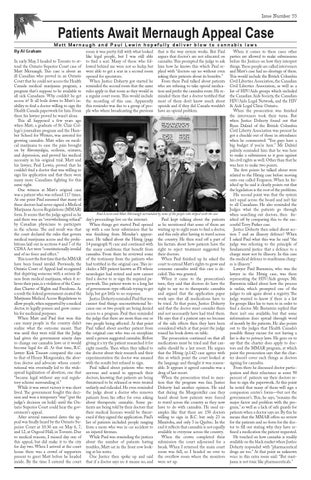 By Al Graham In early May, I headed to Toronto to attend the Ontario Superior Court case of Matt Mernaugh. This case is about an ill Canadian who proved in an Ontario Court that he could not access the Health Canada medical marijuana program, a program that’s suppose to be available to all sick Canadians. Why couldn’t he get access it? It all boils down to Matt’s inability to find a doctor willing to sign the Health Canada paperwork for him. From there his lawyer proved he wasn’t alone. This all happened a few years ago when Matt, a graduate of St. Clair College’s journalism program and the Humber School for Writers, was arrested for growing cannabis. Matt relies on medical marijuana to ease the pain brought on by fibromyalgia, scoliosis, seizures, and depression, and proved his medical necessity in his original trial. Matt and his lawyer, Paul Lewin, proved that he couldn’t find a doctor that was willing to sign his application and that there were many more Canadians fighting for this same right. One witness at Matt’s original case was a patient who was refused 117 times. At one point Paul assumed that many of these doctors had never signed a Medical Marijuana Access Regulations (MMAR) form. It seems that the judge agreed as he said there was an “overwhelming refusal” by Canadian physicians to participate in the scheme. The end result was that the court declared the rules that govern medical marijuana access and the prohibitions laid out in sections 4 and 7 of the CDSA Act were “constitutionally invalid and of no force and effect.” This is not the first time that the MMAR have been found invalid. Previously, the Ontario Court of Appeal had recognized that depriving someone with a serious illness from medical marijuana, when it relieves their pain, is a violation of the Canadian Charter of Rights and Freedoms. As a result the federal government created the Marijuana Medical Access Regulations to allow people, when supported by a medical doctor, to legally possess and grow cannabis for medicinal purposes. When Matt and Paul first won this case many people in the country didn’t realize what the outcome meant. That was until they were told that the Judge had given the government ninety days to change our cannabis laws or it would become legal for all. At that time, B.C. lawyer Kirk Tousaw compared the case to that of Henry Morgentaler, the abortion doctor and advocate whose constitutional win eventually led to the widespread legalization of abortion, one that “became legal without any real regulatory scheme surrounding it.” While it was sweet victory it was short lived. The government fought this decision and won a temporary “stay” (put the judge’s decision on hold) until the Ontario Superior Court could hear the government’s appeal. After several rumoured dates the appeal was finally heard by the Ontario Superior Court at 10:30 am on May 6, 7, and 12, at Osgood Hall, in Toronto. Due to medical reasons, I missed day one of this appeal, but did make it to the city for day two. When I arrived at the court house there was a crowd of supporters present to greet Matt before he headed inside. By the time I entered the court

room it was pretty full with what looked like legal people, but I was still able to find a seat. Many of those who followed behind me were not so lucky, but were able to get a seat in a second room opened for spectators. When Justice Doherty got started he reminded the second room that the same rules apply in that room as they would in a regular court room. This would include the recording of this case. Apparently this reminder was due to a group of people who where broadcasting the previous

that is the way system works. But Paul argues that doctor’s are not educated on cannabis. This prompted the judge to ask him how he knows this which Paul replied with “doctors say no without even asking their patients about its benefits.” From there Paul talked about patients who are refusing to take opioid medication and prefer the cannabis route. He reminded them that a doctor testified that most of them don’t know much about opioids and if they did Canada wouldn’t have an opioid problem.

day’s proceedings live on the internet. When things got started Paul opened up with a one hour submission that he was finishing from Monday’s appearance. He talked about the Hitzig (page 14 paragraph 9) case and continued with the many conditions that benefit from cannabis. From there he reviewed some of the testimony from the patients who had testified in the original case. This includes a MS patient known as FS whose neurologist had retired and now cannot find a doctor to re-sign the required paperwork. This patient wrote to a long list of government-type officials trying to get help, but got little to no response. Justice Doherty reminded Paul that you cannot find things unconstitutional because one or two people are being denied access to a program. Paul then reminded the judge that there are more than one or two people being affected. At that point Paul talked about another patient from the original case who was on morphine until a person suggested cannabis. Before giving it a try the patient researched it for eight months. Then when they talked to the doctor about their research and their experimentation the doctor was amazed with the results but refused to sign. Paul talked about patients who were nervous and scared to approach their doctors, knowing that patients are being threatened to be released or were treated unfairly and ridiculed. He even reminded the judge about a doctor who removes patients from his office for even asking about therapeutic cannabis. Some patients are being told by their doctors that their medical licenses would be threatened if they signed the application. Paul’s list of patients included people ranging from a mom who was in car accident to an injured fireman. While Paul was reminding the justices about the number of patients having troubles, Matt sat in the front row looking at his notes. One Justice then spoke up and said that if a doctor says no it means no, and

Paul kept talking about the patients as he mentioned that some of them are waiting up to eight years to find a doctor, and this only after having to travel across the country. He then read off a part of his factum about how patients have the right to reject treatment suggested by their doctors. When Paul finished up he asked the court to extend Matt’s rights to grow and consume cannabis until this case is decided. This was granted. When it came to the prosecution’s turn, they said that doctors do have the right to say no to therapeutic cannabis and argued that the application paper work says that all medications have to be tried. At that point, Justice Doherty said that the doctor must consider them and not necessarily have had tried them. He says that if a patient says no because of the side effects then they have been considered which at that point the judge tossed his book down on table. The prosecution continued on that all medications must be tried and that cannabis should be a last resort. He argues that the Hitzig (p.142) case agrees with this at which point the court looked at the language and thought it was reasonable. It appears it agreed cannabis was a drug of last resort. When the prosecution tried to mention that the program was fair, Justice Doherty had another opinion. He said that during the Morgenteller case they heard about how patients were forced to travel across the country as they now have to do with cannabis. He used examples like that there are 150 doctors willing to sign in B.C. but only 23 in Manitoba, and only 3 in Quebec. In the end it reflects that cannabis is not equally available to everyone across the country. When the crown completed their submission the court adjourned for a break. When I returned the main court room was full, so I headed on over to the overflow room where the monitors were set up.

When it comes to these cases other parties are allowed to make submissions before the Justices on how they interpret things. These people are called interveners and Matt’s case had no shortage of them. This would include the British Columbia Civil Liberties Association, the Canadian Civil Liberties Association, as well as a list of HIV/Aids groups which included the Canadian Aids Society, the Canadian HIV/Aids Legal Network, and the HIV &amp; Aids Legal Clinic Ontario. When the prosecution was finished the interveners took their turns. But when Justice Doherty found out that Ryan Dalziel of the British Columbia Civil Liberty Association was present he got a chuckle out of those in attendance when he commented: “You guys have a big budget if you’re here.” Mr Dalziel politely reminded him that he was here to make a submission as it goes against his civil rights as well. Other than that he was here to make two points. The first points he talked about were related to the Hitzig case before moving onto one called Ferguson. When he finished up he said it clearly points out that the legislation is the root of the problems. His second point was that the system isn’t equal across the board and isn’t fair to all Canadians. He also reminded the Judges what the patients go through when searching out doctors, then finished off by comparing this to the successful Terry Parker case. Justice Doherty then asked about section 7 and an illusory defence? When I asked Paul what this was he said “the judge was referring to the principle of fundamental justice that a defence to a charge must not be illusory. In this case the medical defence to marihuana charges is illusory.” Lawyer Paul Burnstein, who was the lawyer in the Hitzig case, was there representing the HIV/Aids groups. Mr. Burnstein talked about how the process is unfair, which prompted one of the judges to ask again about a registry. The judge wanted to know if there is a list for groups likes his to turn to in order to find a doctor. Mr. Burnstein replied that there isn’t one available, but that some information does spread through word of mouth by the patients. He also points out to the judges that Health Canada’s possible flimsy excuse for not having a list is due to privacy laws. He goes on to say that the charter does apply to doctors and the MMAR program, at which point the prosecution says that the charter doesn’t cover such things as doctors signing for cannabis. From there he discussed doctor participation and their reluctance as some 90 percent of patients say their doctors refuse to sign the paperwork. At this point he noted that many of them will sign a compassion centre’s forms—but not the government’s. This, he says, “remains the major factor and problem with the program,” as well as a lack of safe guards for patients when a doctor says no. By this he means that the MMAR offers no review for the patients and no form for the doctor to fill out stating why they have refused a medication the patient requested. He touched on how cannabis is readily available on the black market where Justice Doherty responded with “pharmaceutical drugs are too.” At that point an unknown voice in this extra room said: “But marijuana is not toxic like pharmaceuticals.”