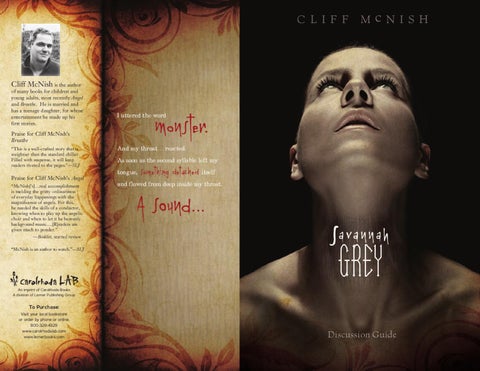 Cliff McNish is the author

of many books for children and young adults, most recently Angel and Breathe. He is married and has a teenage daughter, for whose entertainment he made up his first stories.

I uttered the word

Praise for Cliff McNish’s Breathe “This is a well-crafted story that is weightier than the standard chiller. Filled with suspense, it will keep readers riveted to the pages.”—SLJ

Praise for Cliff McNish’s Angel “McNish[’s]…real accomplishment is melding the gritty ordinariness of everyday happenings with the magnificence of angels. For this, he needed the skills of a conductor, knowing when to play up the angelic choir and when to let it be heavenly background music….[R]eaders are given much to ponder.”

As soon as the second syllable left my

and flowed from deep inside my throat.

“McNish is an author to watch.”—SLJ

An imprint of Carolrhoda Books A division of Lerner Publishing Group

To Purchase: Visit your local bookstore or order by phone or online. 800-328-4929 www.carolrhodalab.com www.lernerbooks.com

Savanna h Gr ey needs to keep moving. She doesn’t know why, but she can’t let

herself get tied down by too many people. It’s almost like she’s being chased by something. And now something strange is happening with her neck—with her throat.

to understand her. He even knows about her neck. The same thing is happening to him. It’s as if their voices are becoming weapons, warming up for some kind of attack.

S G has no idea what might be chasing her or why her voice suddenly feels like the most powerful weapon on the planet, but she’s about to find out. Nature is preparing for battle with the universe’s ultimate monster. The time to fight is almost here.

13. Explain the role nature plays in the book. What do leaves symbolize? 14. Discuss the ending of the book. What happens to the Ocrassa? What do you think will happen to Savannah, Nina, Reece, and his siblings?

Topics for Discussion: 1. What is unique about Reece’s physical appearance and how has it affected him throughout his life?

About Carolrhoda Lab™ Carolrhoda Lab is dedicated to distinctive, provocative, boundary-pushing fiction for teens and their sympathizers. Carolrhoda Lab probes and examines the young-adult condition one novel at a time,

5. Why do you think Savannah has the powers and not Nina or someone else?

affording YA authors and readers an opportunity to explore and experiment with thoughts, ideas, and paradigms in the human condition. Adolescence is an experience we share and a condition from

6. Describe “the Horror.” Why do you think the author chose the name “the Horror” and what does it symbolize?

which some of us never quite recover. All of us at Carolrhoda Lab are proud to proclaim our lifelong adolescence and our commitment to publishing exceptional fiction about the teenage experience.

A discussion guide for Savannah Grey by Cliff McNish. Published by Carolhoda