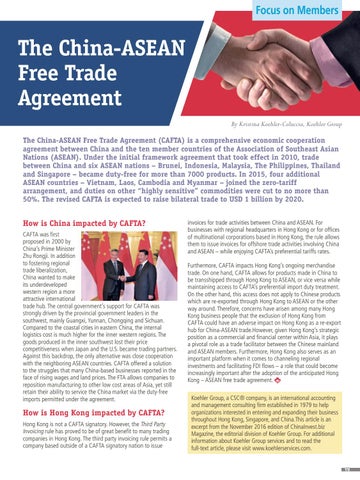 The China-ASEAN Free Trade Agreement By Kristina Koehler-Coluccia, Koehler Group The China-ASEAN Free Trade Agreement (CAFTA) is a comprehensive economic cooperation agreement between China and the ten member countries of the Association of Southeast Asian Nations (ASEAN). Under the initial framework agreement that took effect in 2010, trade between China and six ASEAN nations – Brunei, Indonesia, Malaysia, The Philippines, Thailand and Singapore – became duty-free for more than 7000 products. In 2015, four additional ASEAN countries – Vietnam, Laos, Cambodia and Myanmar – joined the zero-tariff arrangement, and duties on other “highly sensitive” commodities were cut to no more than 50%. The revised CAFTA is expected to raise bilateral trade to USD 1 billion by 2020.

How is China impacted by CAFTA? CAFTA was first proposed in 2000 by China’s Prime Minister Zhu Rongji. In addition to fostering regional trade liberalization, China wanted to make its underdeveloped western region a more attractive international trade hub. The central government’s support for CAFTA was strongly driven by the provincial government leaders in the southwest, mainly Guangxi, Yunnan, Chongqing and Sichuan. Compared to the coastal cities in eastern China, the internal logistics cost is much higher for the inner western regions. The goods produced in the inner southwest lost their price competitiveness when Japan and the U.S. became trading partners. Against this backdrop, the only alternative was close cooperation with the neighboring ASEAN countries. CAFTA offered a solution to the struggles that many China-based businesses reported in the face of rising wages and land prices. The FTA allows companies to reposition manufacturing to other low cost areas of Asia, yet still retain their ability to service the China market via the duty-free imports permitted under the agreement.

invoices for trade activities between China and ASEAN. For businesses with regional headquarters in Hong Kong or for offices of multinational corporations based in Hong Kong, the rule allows them to issue invoices for offshore trade activities involving China and ASEAN – while enjoying CAFTA’s preferential tariffs rates. Furthermore, CAFTA impacts Hong Kong’s ongoing merchandise trade. On one hand, CAFTA allows for products made in China to be transshipped through Hong Kong to ASEAN, or vice versa while maintaining access to CAFTA’s preferential import duty treatment. On the other hand, this access does not apply to Chinese products which are re-exported through Hong Kong to ASEAN or the other way around. Therefore, concerns have arisen among many Hong Kong business people that the exclusion of Hong Kong from CAFTA could have an adverse impact on Hong Kong as a re-export hub for China-ASEAN trade.However, given Hong Kong’s strategic position as a commercial and financial center within Asia, it plays a pivotal role as a trade facilitator between the Chinese mainland and ASEAN members. Furthermore, Hong Kong also serves as an important platform when it comes to channeling regional investments and facilitating FDI flows – a role that could become increasingly important after the adoption of the anticipated Hong Kong – ASEAN free trade agreement. Koehler Group, a CSC® company, is an international accounting and management consulting firm established in 1979 to help organizations interested in entering and expanding their business throughout Hong Kong, Singapore, and China.This article is an excerpt from the November 2016 edition of ChinaInvest.biz Magazine, the editorial division of Koehler Group. For additional information about Koehler Group services and to read the full-text article, please visit www.koehlerservices.com. 19 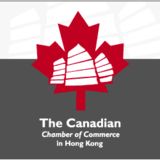