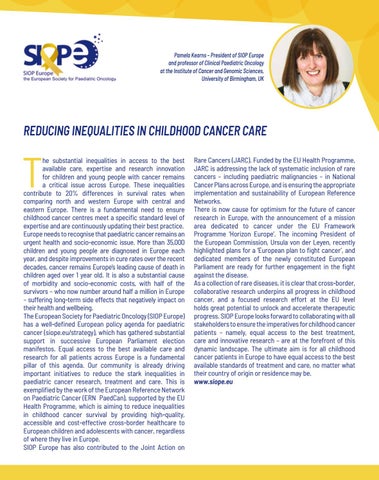 Pamela Kearns – President of SIOP Europe and professor of Clinical Paediatric Oncology at the Institute of Cancer and Genomic Sciences, University of Birmingham, UK

he substantial inequalities in access to the best available care, expertise and research innovation for children and young people with cancer remains a critical issue across Europe. These inequalities contribute to 20% differences in survival rates when comparing north and western Europe with central and eastern Europe. There is a fundamental need to ensure childhood cancer centres meet a specific standard level of expertise and are continuously updating their best practice. Europe needs to recognise that paediatric cancer remains an urgent health and socio-economic issue. More than 35,000 children and young people are diagnosed in Europe each year, and despite improvements in cure rates over the recent decades, cancer remains Europe’s leading cause of death in children aged over 1 year old. It is also a substantial cause of morbidity and socio-economic costs, with half of the survivors – who now number around half a million in Europe – suffering long-term side effects that negatively impact on their health and wellbeing. The European Society for Paediatric Oncology (SIOP Europe) has a well-defined European policy agenda for paediatric cancer (siope.eu/strategy), which has gathered substantial support in successive European Parliament election manifestos. Equal access to the best available care and research for all patients across Europe is a fundamental pillar of this agenda. Our community is already driving important initiatives to reduce the stark inequalities in paediatric cancer research, treatment and care. This is exemplified by the work of the European Reference Network on Paediatric Cancer (ERN  PaedCan), supported by the EU Health Programme, which is aiming to reduce inequalities in childhood cancer survival by providing high-quality, accessible and cost-effective cross-border healthcare to European children and adolescents with cancer, regardless of where they live in Europe. SIOP Europe has also contributed to the Joint Action on

Rare Cancers (JARC). Funded by the EU Health Programme, JARC is addressing the lack of systematic inclusion of rare cancers – including paediatric malignancies – in National Cancer Plans across Europe, and is ensuring the appropriate implementation and sustainability of European Reference Networks. There is now cause for optimism for the future of cancer research in Europe, with the announcement of a mission area dedicated to cancer under the EU Framework Programme ‘Horizon Europe’. The incoming President of the European Commission, Ursula von der Leyen, recently highlighted plans for a ‘European plan to fight cancer’, and dedicated members of the newly constituted European Parliament are ready for further engagement in the fight against the disease. As a collection of rare diseases, it is clear that cross-border, collaborative research underpins all progress in childhood cancer, and a focused research effort at the EU level holds great potential to unlock and accelerate therapeutic progress. SIOP Europe looks forward to collaborating with all stakeholders to ensure the imperatives for childhood cancer patients – namely, equal access to the best treatment, care and innovative research – are at the forefront of this dynamic landscape. The ultimate aim is for all childhood cancer patients in Europe to have equal access to the best available standards of treatment and care, no matter what their country of origin or residence may be. www.siope.eu 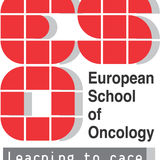 More from European School of Oncology