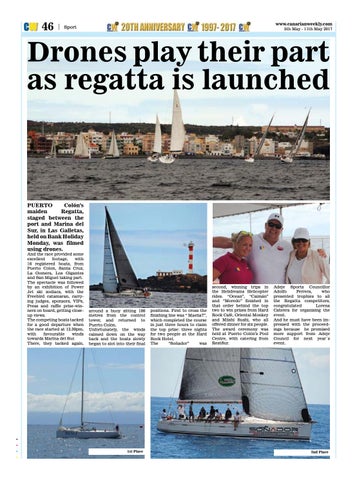 Drones play their part as regatta is launched

PUERTO Colón’s maiden Regatta, staged between the port and Marina del Sur, in Las Galletas, held on Bank Holiday Monday, was filmed using drones. And the race provided some excellent footage, with 16 registered boats, from Puerto Colon, Santa Cruz, La Gomera, Los Gigantes and San Miguel taking part. The spectacle was followed by an exhibition of Power Jet ski zodiacs, with the Freebird catamaran, carrying judges, sponsors, VIPs, Press and raffle prize-winners on board, getting closeup views. The competing boats tacked for a good departure when the race started at 12.30pm, with favourable winds towards Marina del Sur. There, they tacked again,

around a buoy sitting 100 metres from the control tower, and returned to Puerto Colón. Unfortunately, the winds calmed down on the way back and the boats slowly began to slot into their final

positions. First to cross the finishing line was “ Maeña7”, which completed the course in just three hours to claim the top prize: three nights for two people at the Hard Rock Hotel. The “Soñador” was

second, winning trips in the Helidreams Helicopter rides. “Ocean”, “Caimán” and “Moredo” finished in that order behind the top two to win prizes from Hard Rock Café, Oriental Monkey and Miishi Sushi, who all offered dinner for six people. The award ceremony was held at Puerto Colón’s Pool Centre, with catering from RestSur.

Adeje Sports Councillor Adolfo Ferrera, who presented trophies to all the Regatta competitors, congratulated Lorena Cabrera for organising the event. And he must have been impressed with the proceedings because he promised more support from Adeje Council for next year´s event. 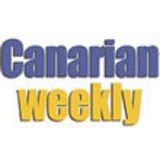