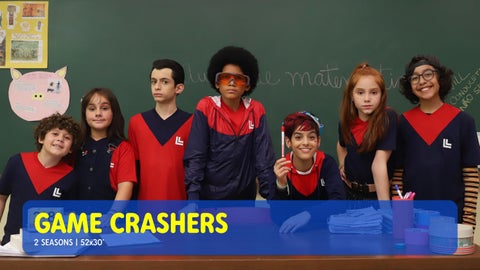 A mix of real life and fantasy – the show explores the diferences between these worlds.

GAME CRASHERS | MAIN CONCEPT Neo, Glinda and Tyron are game characters. Mig and Carol are siblings with diametrically opposed personalities. Everything goes smoothly, until an extraordinary event happens and changes everyone's life. GAME CRASHERS is a children's series that tells the story of a group that is formed when three video game characters - a robot, a cosmic skater and an intergalactic defender - decide to jump from the screen to real life. Together, with Mig and Carol, they will live the school and life day-to-day events. Gradually, they realize that they have skills, complementary talents and end up getting everything they want. And what they don't want, as well. With a lot of energy and little experience, they get into all sorts of trouble. Tired of fighting villains and saving the universe hundreds of times a day, now they have real friends and are looking for something bigger and more fascinating: live the great adventure of real life.

GAME CRASHERS | THE FORMAT GAME CRASHERS is a sitcom, in line with iCarly and Wizards of Waverly Place. Each episode brings a new story and a new challenge to be solved by the group. With 26 episodes per season, GAME CRASHERS makes use of the dynamics and elements of comedy of errors to produce humor, while empathizing with the main characters. The series is designed to be shot fully in studio. Its scenarios include the premises of a school and a â&#x20AC;&#x153;secret roomâ&#x20AC;?, called In Between Worlds, where the group gathers and plans its actions. Every now and then, we will have some scenes that will happen inside the video game - always blue screen shots.

GLINDA, NEO AND TYRON Go into the real world (Carol and Migâ&#x20AC;&#x2122;s room). CAROL AND MIG After reaching the highest scores they get surprised when a bug happens in the game and the 3 characters appear in the room.

Glinda, Neo and Tyron enroll in the Pirandello school, where they get to live an everyday life. However, no one knows they are game characters and unusual things will start happening, in a funny way, at the school.

They become a group of 5 friends living funny experiences everyday at the school.

THE GAME CRASHERS WHO IS GLINDA?

The coolest cosmic skateboarder in games. Tough, sarcastic and often

THE PHOTONS ENERGIZING TIARA Glinda's tiara has the ability to cast powers,

which usually come out quite differently than planned.

WHO IS NEO? The bravest intergalactic defender of the universe. Your sense of heroism

makes any activity, however trivial, an epic adventure, at least in his head.

emotions, among other functions.

WHO IS TYRON? Supporting character in Storm Kroll, is a robot with a programming error. With a few screws missing, it's totally unpredictable. It takes everything literally and doesn't understand ironies, although it can talk to machines.

THE HI-TECH WATCH His hi-tech watch can access any information in the universe and play voices.

Expansive, imaginative and always lively, Mig is 2 years younger than Carol, but infinitely more childish. He is one of Storm Croll’s best players and is dazzled to have friends coming from the video game. His school grades are great at PE, Music and… that's all. Mig is smart, but not very focused. Passionate and motivated by emotions, he loves adventures and is hyper-competitive: despite beating everyone in his favorite game, he never managed to defeat his sister. Mig ends up being the group's mascot and his imagination often gets them into

trouble - but it also helps his friends get out of it.

Carol is a STEM GIRL - Science, Technology, Engineering and Math. She is a little genius, a guide for the curious minds. Introvert and geek, Carol is overly concerned and slightly pessimistic - she is the first to raise everything that can go wrong in any situation that gets out of hand. She is always the voice of reason of the group, when she thinks they are going too far. Carol is the reason in the midst of nonsense and has a troubled relationship with Mig, with whom she is always clashing. But when the situation tightens, they realize that their personalities and temperaments, though so different, may be complementary.

A BORED GIRL Mabel is always dividing herself between two activities: licking the boots of the school principal and trying to figure out something about the three new students. Mabel is 99.97% sure that Tyron, Sophie and Neo hide secrets. A kind of “Dick Dastardly” of the class, Mabel will come up with all sorts of strategies to expose all three - without success.

HAPPY TO HELP... MABEL Fabio is always trying to please Mabel. Often, his ideas are even better than his colleague's - who never listens to him. But that never shakes Fabio's enthusiasm.

THE ADULTS BILLER – THE PRINCIPAL

A tribute to the school principal of Ferris Bueller (“Ferris

Intelligent and insightful, Gregory is the only reasonable

Pessimistic and grumpy as Roz, the "Monsters S/A" grouchy snail-like

Bueller's Day Off”), Biller is serious, strict and… completely

person in this group of crazy people. If he were the

character, Ms. Olga disagrees with absolutely everything that is

goofy. He notices that something is wrong with the three

principal, the school would be one of the best in the

proposed in the group. Concerned only with school bureaucracy, she

new students, but can't put his finger on it. He has a kind

country. But whenever Gregory proposes something, even

of “Mini Me”: the student Mabel. With her help, Principal

if innovative, he hears Biller's unfailing phrase: "Hold it,

is only enthusiastic about one thing: her channel on the Internet,

Biller will try to uncover what's behind the crazy

Gregory!" and since he has no decision-making power, he

“Librarians in Action” - 15-second videos, where she gives stupid tips

behavior of those students.

is always defeated by the stupidest ideas of the group.

about her daily life.

THE ADULTS REBECCA - THE TEACHER

Rebecca is a demanding and hyper-qualified teacher. She is

Prior to becoming a teacher, Celeste was a guitarist for the

Eli is bossy and gluttonous, who lives in constant alertness. He is a

always surprising everyone with her incredible - and seemingly

strict man, stuck in the past. He is always remembering his time

endless - life experiences: she has traveled to Mauritania, to

Jack Black in "School of Rock", her main characteristics are

Bhutan, came face to face with a tiger, and even talked on the

endless enthusiasm and irrational optimism. In addition, she

Championship, when he scored a goal in overtime and his team

phone with the Queen of Sweden. But one particular subject is her

has a relationship of friendship and trust with the students.

was the champion. Furthermore, he uses every metaphor

favorite: frogs. She is deeply knowledgeable about reptiles and

If self-help were a person, it would be Celeste.

possible with sports - even if sometimes it doesn't make any

loves talking about it with everyone.

THE IN BETWEEN WORLD

THE IN BETWEEN WORLD

REALITY / VIRTUALITY LETROCON - KEY TO GET IN 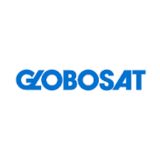