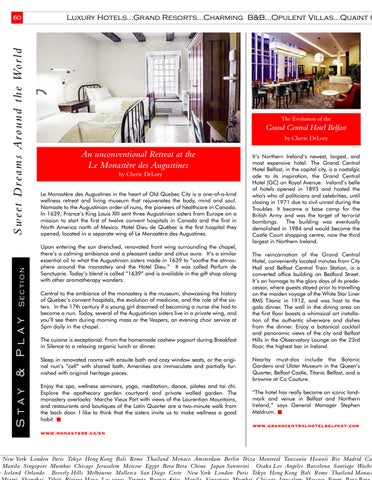 The Evolution of the

An unconventional Retreat at the Le Monastère des Augustines by Cherie DeLory Le Monastère des Augustines in the heart of Old Quebec City is a one-of-a-kind wellness retreat and living museum that rejuvenates the body, mind and soul. Namaste to the Augustinian order of nuns, the pioneers of healthcare in Canada. In 1639, France’s King Louis XIII sent three Augustinian sisters from Europe on a mission to start the first of twelve convent hospitals in Canada and the first in North America north of Mexico. Hotel Dieu de Québec is the first hospital they opened, located in a separate wing of Le Monastère des Augustines. Upon entering the sun drenched, renovated front wing surrounding the chapel, there’s a calming ambiance and a pleasant cedar and citrus aura. It’s a similar essential oil to what the Augustinian sisters made in 1639 to “soothe the atmosphere around the monastery and the Hotel Dieu.” It was called Parfum de Sanctuarie. Today’s blend is called “1639” and is available in the gift shop along with other aromatherapy wonders. Central to the ambiance of the monastery is the museum, showcasing the history of Quebec’s convent hospitals, the evolution of medicine, and the role of the sisters. In the 17th century if a young girl dreamed of becoming a nurse she had to become a nun. Today, several of the Augustinian sisters live in a private wing, and you’ll see them during morning mass or the Vespers, an evening choir service at 5pm daily in the chapel. The cuisine is exceptional. From the homemade cashew yogourt during Breakfast in Silence to a relaxing organic lunch or dinner. Sleep in renovated rooms with ensuite bath and cozy window seats, or the original nun’s “cell” with shared bath. Amenities are immaculate and partially furnished with original heritage pieces. Enjoy the spa, wellness seminars, yoga, meditation, dance, pilates and tai chi. Explore the apothecary garden courtyard and private walled garden. The monastery overlooks Marche Vieux Port with views of the Laurentian Mountains, and restaurants and boutiques of the Latin Quarter are a two-minute walk from the back door. I like to think that the sisters invite us to make wellness a good habit.

It’s Northern Ireland’s newest, largest, and most expensive hotel. The Grand Central Hotel Belfast, in the capital city, is a nostalgic ode to its inspiration, the Grand Central Hotel (GC) on Royal Avenue. Ireland’s belle of hotels opened in 1893 and hosted the who's who of politicians and celebrities, until closing in 1971 due to civil unrest during the Troubles. It became a base camp for the British Army and was the target of terrorist bombings. The building was eventually demolished in 1984 and would become the Castle Court shopping centre, now the third largest in Northern Ireland. The reincarnation of the Grand Central Hotel, conveniently located minutes from City Hall and Belfast Central Train Station, is a converted office building on Bedford Street. It’s an homage to the glory days of its predecessor, where guests stayed prior to travelling on the maiden voyage of the White Star Liner RMS Titanic in 1912, and was host to the gala dinner. The wall in the dining area on the first floor boasts a whimsical art installation of the authentic silverware and dishes from the dinner. Enjoy a botanical cocktail and panoramic views of the city and Belfast Hills in the Observatory Lounge on the 23rd floor, the highest bar in Ireland. Nearby must-dos include the Botanic Gardens and Ulster Museum in the Queen’s Quarter, Belfast Castle, Titanic Belfast, and a brownie at Co Couture. “The hotel has really became an iconic landmark and venue in Belfast and Northern Ireland,” says General Manager Stephen Meldrum. 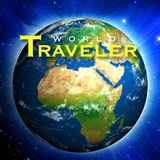 Now in our 17th year of publishing, Canadian World Traveller explores the culture and history of worldwide destinations, sharing the adventu...

Now in our 17th year of publishing, Canadian World Traveller explores the culture and history of worldwide destinations, sharing the adventu...