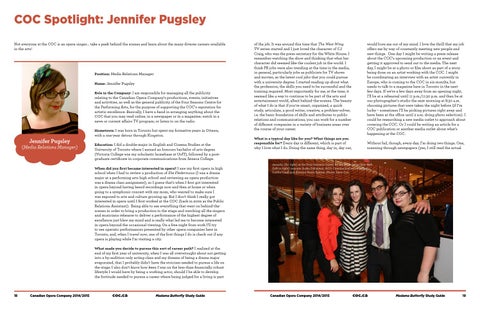 COC Spotlight: Jennifer Pugsley Not everyone at the COC is an opera singer… take a peek behind the scenes and learn about the many diverse careers available in the arts!

Position: Media Relations Manager Name: Jennifer Pugsley Role in the Company: I am responsible for managing all the publicity relating to the Canadian Opera Company’s productions, events, initiatives and activities, as well as the general publicity of the Four Seasons Centre for the Performing Arts, for the purpose of supporting the COC’s reputation for artistic excellence. Basically, I have a hand in arranging anything about the COC that you may read online, in a newspaper or in a magazine; watch in a news or current affairs TV program; or listen to on the radio. Hometown: I was born in Toronto but spent my formative years in Ottawa, with a one-year detour through Kingston.

Education: I did a double-major in English and Cinema Studies at the University of Toronto where I earned an honours bachelor of arts degree (Victoria College was my scholastic homebase at UofT), followed by a postgraduate certificate in corporate communications from Seneca College. When did you first became interested in opera? I saw my first opera in high school when I had to review a production of Die Fledermaus (I was a drama major at a performing arts high school and reviewing an opera production was a drama class assignment), so I guess that’s when I first got interested in opera beyond having heard recordings now and then at home or when going to a symphonic concert with my mom, who wanted to make sure I was exposed to arts and culture growing up. But I don’t think I really got interested in opera until I first worked at the COC (back in 2002 as the Public Relations Assistant). Being able to see everything that went on behind-thescenes in order to bring a production to the stage and watching all the singers and musicians rehearse to deliver a performance of the highest degree of excellence just blew my mind and is really what led me to become interested in opera beyond the occasional viewing. On a free night from work I’ll try to see operatic performances presented by other opera companies here in Toronto, and, when I travel now, one of the first things I do is check out if any opera is playing while I’m visiting a city.

of the job. It was around this time that The West Wing TV series started and I just loved the character of CJ Craig, who was the press secretary for the White House. I remember watching the show and thinking that what her character did seemed like the coolest job in the world. I think PR jobs were also trending at the time in the media, in general, particularly jobs as publicists for TV shows and movies, as the latest cool jobs that you could pursue with a university degree. I started reading up about what the profession, the skills you need to be successful and the training required. Most importantly for me, at the time, it seemed like a way to continue to be part of the arts and entertainment world, albeit behind-the-scenes. The beauty of what I do is that if you’re smart, organized, a quick study, articulate, a good writer, creative, a problem-solver, i.e. the basic foundation of skills and attributes to public relations and communications, you can work for a number of different companies in a variety of business areas over the course of your career. What is a typical day like for you? What things are you responsible for? Every day is different, which is part of why I love what I do. Doing the same thing, day in, day out,

would bore me out of my mind. I love the thrill that my job offers me by way of constantly meeting new people and new things. One day I might be writing a press release about the COC’s upcoming production or an event and getting it approved to send out to the media. The next day, I might be at a photo or film shoot as part of a story being done on an artist working with the COC. I might be coordinating an interview with an artist currently in Europe, who is coming to the COC in six months, but needs to talk to a magazine here in Toronto in the next few days. If we’re a few days away from an opening night, I’ll be at a rehearsal until 11 p.m./11:30 p.m. and then be at our photographer’s studio the next morning at 8:30 a.m. choosing pictures that were taken the night before (if I’m lucky – sometimes I’ll be picking pictures right away and have been at the office until 2 a.m. doing photo selection). I could be researching a new media outlet to approach about covering the COC. Or I could be writing an article for a COC publication or another media outlet about what’s happening at the COC. Without fail, though, every day, I’m doing two things. One, scanning through newspapers (yes, I still read the actual

What made you decide to pursue this sort of career path? I realized at the end of my first year of university, when I was all overwrought about not getting into a by-audition-only acting class and my dreams of being a drama major evaporated, that I probably didn’t have the stoicism needed to pursue a life on the stage. I also don’t know how keen I was on the less-than-financially robust lifestyle I would have by being a working actor, should I be able to develop the fortitude needed to pursue a career where being judged for a living is part 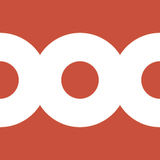 Learn more about the Canadian Opera Company's 2014 production of Puccini's Madama Butterfly, complete with biographies, a listening guide an...

Learn more about the Canadian Opera Company's 2014 production of Puccini's Madama Butterfly, complete with biographies, a listening guide an...