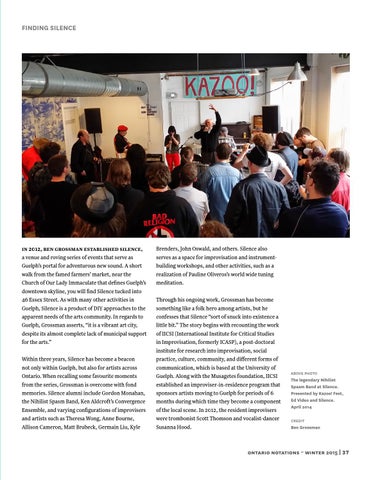 in 2012, ben grossman established silence, a venue and roving series of events that serve as Guelph’s portal for adventurous new sound. A short walk from the famed farmers’ market, near the Church of Our Lady Immaculate that defines Guelph’s downtown skyline, you will find Silence tucked into 46 Essex Street. As with many other activities in Guelph, Silence is a product of DIY approaches to the apparent needs of the arts community. In regards to Guelph, Grossman asserts, “it is a vibrant art city, despite its almost complete lack of municipal support for the arts.” Within three years, Silence has become a beacon not only within Guelph, but also for artists across Ontario. When recalling some favourite moments from the series, Grossman is overcome with fond memories. Silence alumni include Gordon Monahan, the Nihilist Spasm Band, Ken Aldcroft’s Convergence Ensemble, and varying configurations of improvisers and artists such as Theresa Wong, Anne Bourne, Allison Cameron, Matt Brubeck, Germain Liu, Kyle

Brenders, John Oswald, and others. Silence also serves as a space for improvisation and instrumentbuilding workshops, and other activities, such as a realization of Pauline Oliveros’s world wide tuning meditation. Through his ongoing work, Grossman has become something like a folk hero among artists, but he confesses that Silence “sort of snuck into existence a little bit.” The story begins with recounting the work of IICSI (International Institute for Critical Studies in Improvisation, formerly ICASP), a post-doctoral institute for research into improvisation, social practice, culture, community, and different forms of communication, which is based at the University of Guelph. Along with the Musagetes foundation, IICSI established an improviser-in-residence program that sponsors artists moving to Guelph for periods of 6 months during which time they become a component of the local scene. In 2012, the resident improvisers were trombonist Scott Thomson and vocalist-dancer Susanna Hood.

In this issue we look at the role of artist-run spaces in fostering experimental music. We also feature a report back-from the Sound in the Land conference, album reviews, CMC project updates, and more.