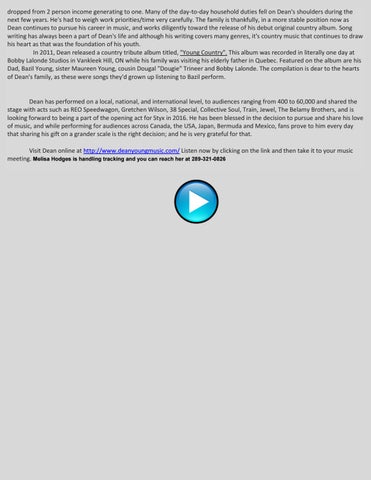 dropped from 2 person income generating to one. Many of the day-to-day household duties fell on Dean's shoulders during the next few years. He's had to weigh work priorities/time very carefully. The family is thankfully, in a more stable position now as Dean continues to pursue his career in music, and works diligently toward the release of his debut original country album. Song writing has always been a part of Dean's life and although his writing covers many genres, it's country music that continues to draw his heart as that was the foundation of his youth. In 2011, Dean released a country tribute album titled, "Young Country". This album was recorded in literally one day at Bobby Lalonde Studios in Vankleek Hill, ON while his family was visiting his elderly father in Quebec. Featured on the album are his Dad, Bazil Young, sister Maureen Young, cousin Dougal "Dougie" Trineer and Bobby Lalonde. The compilation is dear to the hearts of Dean's family, as these were songs they'd grown up listening to Bazil perform.

Dean has performed on a local, national, and international level, to audiences ranging from 400 to 60,000 and shared the stage with acts such as REO Speedwagon, Gretchen Wilson, 38 Special, Collective Soul, Train, Jewel, The Belamy Brothers, and is looking forward to being a part of the opening act for Styx in 2016. He has been blessed in the decision to pursue and share his love of music, and while performing for audiences across Canada, the USA, Japan, Bermuda and Mexico, fans prove to him every day that sharing his gift on a grander scale is the right decision; and he is very grateful for that. Visit Dean online at http://www.deanyoungmusic.com/ Listen now by clicking on the link and then take it to your music meeting. Melisa Hodges is handling tracking and you can reach her at 289-321-0826 An Industry magazine for the Canadian Country Music Industry

An Industry magazine for the Canadian Country Music Industry