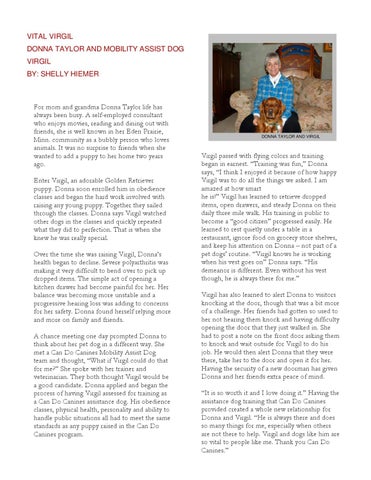 For mom and grandma Donna Taylor life has always been busy. A self-employed consultant who enjoys movies, reading and dining out with friends, she is well known in her Eden Prairie, Minn. community as a bubbly person who loves animals. It was no surprise to friends when she wanted to add a puppy to her home two years ago. Enter Virgil, an adorable Golden Retriever puppy. Donna soon enrolled him in obedience classes and began the hard work involved with raising any young puppy. Together they sailed through the classes. Donna says Virgil watched other dogs in the classes and quickly repeated what they did to perfection. That is when she knew he was really special. Over the time she was raising Virgil, Donna’s health began to decline. Severe polyarthritis was making it very difficult to bend over to pick up dropped items. The simple act of opening a kitchen drawer had become painful for her. Her balance was becoming more unstable and a progressive hearing loss was adding to concerns for her safety. Donna found herself relying more and more on family and friends. A chance meeting one day prompted Donna to think about her pet dog in a different way. She met a Can Do Canines Mobility Assist Dog team and thought, “What if Virgil could do that for me?” She spoke with her trainer and veterinarian. They both thought Virgil would be a good candidate. Donna applied and began the process of having Virgil assessed for training as a Can Do Canines assistance dog. His obedience classes, physical health, personality and ability to handle public situations all had to meet the same standards as any puppy raised in the Can Do Canines program.

Virgil passed with flying colors and training began in earnest. “Training was fun,” Donna says, “I think I enjoyed it because of how happy Virgil was to do all the things we asked. I am amazed at how smart he is!” Virgil has learned to retrieve dropped items, open drawers, and steady Donna on their daily three mile walk. His training in public to become a “good citizen” progressed easily. He learned to rest quietly under a table in a restaurant, ignore food on grocery store shelves, and keep his attention on Donna – not part of a pet dogs’ routine. “Virgil knows he is working when his vest goes on” Donna says. “His demeanor is different. Even without his vest though, he is always there for me.” Virgil has also learned to alert Donna to visitors knocking at the door, though that was a bit more of a challenge. Her friends had gotten so used to her not hearing them knock and having difficulty opening the door that they just walked in. She had to post a note on the front door asking them to knock and wait outside for Virgil to do his job. He would then alert Donna that they were there, take her to the door and open it for her. Having the security of a new doorman has given Donna and her friends extra peace of mind. “It is so worth it and I love doing it.” Having the assistance dog training that Can Do Canines provided created a whole new relationship for Donna and Virgil. “He is always there and does so many things for me, especially when others are not there to help. Virgil and dogs like him are so vital to people like me. Thank you Can Do Canines.”