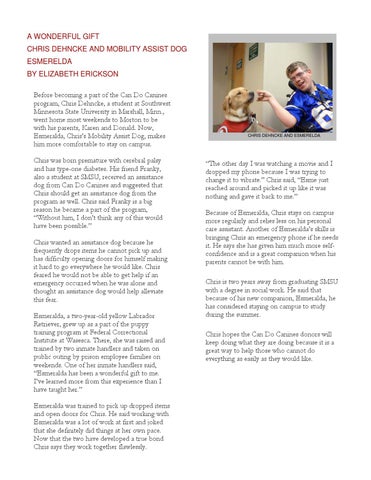 A WONDERFUL GIFT CHRIS DEHNCKE AND MOBILITY ASSIST DOG ESMERELDA BY ELIZABETH ERICKSON Before becoming a part of the Can Do Canines program, Chris Dehncke, a student at Southwest Minnesota State University in Marshall, Minn., went home most weekends to Morton to be with his parents, Karen and Donald. Now, Esmeralda, Chris’s Mobility Assist Dog, makes him more comfortable to stay on campus. Chris was born premature with cerebral palsy and has type-one diabetes. His friend Franky, also a student at SMSU, received an assistance dog from Can Do Canines and suggested that Chris should get an assistance dog from the program as well. Chris said Franky is a big reason he became a part of the program, “Without him, I don’t think any of this would have been possible.” Chris wanted an assistance dog because he frequently drops items he cannot pick up and has difficulty opening doors for himself making it hard to go everywhere he would like. Chris feared he would not be able to get help if an emergency occurred when he was alone and thought an assistance dog would help alleviate this fear. Esmeralda, a two-year-old yellow Labrador Retriever, grew up as a part of the puppy training program at Federal Correctional Institute at Wasesca. There, she was raised and trained by two inmate handlers and taken on public outing by prison employee families on weekends. One of her inmate handlers said, “Esmeralda has been a wonderful gift to me. I’ve learned more from this experience than I have taught her.” Esmeralda was trained to pick up dropped items and open doors for Chris. He said working with Esmeralda was a lot of work at first and joked that she definitely did things at her own pace. Now that the two have developed a true bond Chris says they work together flawlessly.

“The other day I was watching a movie and I dropped my phone because I was trying to change it to vibrate.” Chris said, “Esme just reached around and picked it up like it was nothing and gave it back to me.” Because of Esmeralda, Chris stays on campus more regularly and relies less on his personal care assistant. Another of Esmeralda’s skills is bringing Chris an emergency phone if he needs it. He says she has given him much more selfconfidence and is a great companion when his parents cannot be with him. Chris is two years away from graduating SMSU with a degree in social work. He said that because of his new companion, Esmeralda, he has considered staying on campus to study during the summer. Chris hopes the Can Do Canines donors will keep doing what they are doing because it is a great way to help those who cannot do everything as easily as they would like.