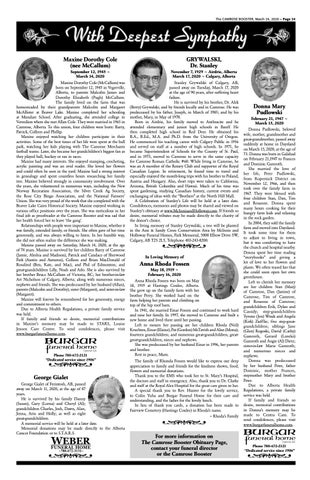 Maxine Dorothy Cole (nee McCallum) September 12, 1945 ~ March 14, 2020 Maxine Dorothy Cole (McCallum) was born on September 12, 1945 in Vegreville, Alberta, to parents Malcolm James and Dorothy Elizabeth (Pugh) McCallum. The family lived on the farm that was homesteaded by their grandparents Malcolm and Margaret McAllister at Beaver Lake. Maxine completed her schooling at Mundare School. After graduating, she attended college in Vermilion where she met Allan Cole. They were married in 1965 in Camrose, Alberta. To this union, four children were born: Barry, Patrick, Colleen and Phillip. Maxine enjoyed watching her children participate in their activities. Some of the best times of her life were spent at the ball park, watching her kids playing with The Camrose Merchants fastball teams. Later, she became her grandchildren’s biggest fan as they played ball, hockey or ran in races.  Maxine had many interests. She enjoyed stamping, crocheting, acrylic painting and was an avid reader. She loved her flowers and could often be seen in the yard. Maxine had a strong interest in genealogy and spent countless hours researching her family tree. Maxine believed strongly in community involvement. Over the years, she volunteered in numerous ways, including the New Norway Recreation Association, the Silver Creek Ag Society, the Rose City Bingo Association, and the National Farmers’ Union. She was very proud of the work that she completed with the Beaver Lake Cairn Historical Society. Maxine enjoyed working in various office positions over the years. She was meticulous in her final job as proofreader at the Camrose Booster and was sad that her health forced her to leave ‘the gang’. Relationships with people were important to Maxine, whether it was family, extended family, or friends. She often gave of her time generously, and was always willing to listen. In her humble way, she did not often realize the difference she was making. Maxine passed away on Saturday, March 14, 2020, at the age of 74 years. Maxine is survived by her children Barry of Camrose (Jamie, Aleshia and Madison), Patrick and Candace of Sherwood Park (Austin and Autumn), Colleen and Brian MacDonald of Rosalind (Ben, Kate, and Mac), and Phil of Edmonton; and great-grandchildren Lilly, Noah and Arlo. She is also survived by her brother Bruce McCallum of Victoria, BC; her brother-in-law Art Nicholson of Calgary, Alberta; along with numerous nieces, nephews and friends. She was predeceased by her husband (Allan), parents (Malcolm and Dorothy), sister (Margaret), and sister-in-law (Margaret). Maxine will forever be remembered for her generosity, energy and commitment to others. Due to Alberta Health Regulations, a private family service was held.  If family and friends so desire, memorial contributions in Maxine’s memory may be made to STARS, Louise Jensen Care Centre. To send condolences, please visit www.burgarfuneralhome.com.

George Gialet George Gialet of Ferintosh, AB, passed away on March 11, 2020, at the age of 87 years. He is survived by his family Danny (Susan), Gary (Lorna) and Cheryl (Al); grandchildren Charles, Josh, Dawn, Alan, Jenna, Arin and Holly; as well as eight great-grandchildren. A memorial service will be held at a later date. Memorial donations may be made directly to the Alberta Cancer Foundation or to S.T.A.R.S.

GRYWALSKI, Dr. Stanley November 7, 1929 ~ Airdrie, Alberta March 17, 2020 ~ Calgary, Alberta Stanley Grywalski of Calgary, AB, passed away on Tuesday, March 17, 2020 at the age of 90 years, after suffering heart failure. He is survived by his brother, Dr. Alek (Betty) Grywalski; and by friends locally and in Camrose. He was predeceased by his father, Joseph, in March of 1985; and by his mother, Mary, in May of 1978. Born in Airdrie, his family moved to Anthracite and he attended elementary and junior high schools in Banff. He then completed high school in Red Deer. He obtained his B.A., B.Ed., M.A. and Ph.D. from the University of Oregon. He commenced his teaching career with Calgary Public in 1956 and served on staff at a number of high schools. In 1971, he became Superintendent of Schools for the County of St. Paul, and in 1973, moved to Camrose to serve in the same capacity for Camrose Roman Catholic #60. While living in Camrose, he was an A member of the Rotary Club and supporter of the Royal Canadian Legion. In retirement, he found time to travel and especially enjoyed the month-long trips with his brother to Poland, Austria and Hungary. Also, short trips were taken to California, Arizona, British Columbia and Hawaii. Much of his time was spent gardening, studying Canadian history, current events and exchanging of ideas with the “Brothers” at the North Hill Mall. A Celebration of Stanley’s Life will be held at a later date. Condolences, memories and photos may be shared and viewed on Stanley’s obituary at www.McInnisandHolloway.com. If friends so desire, memorial tributes may be made directly to the charity of the donor’s choice. In living memory of Stanley Grywalski, a tree will be planted in the Ann & Sandy Cross Conservation Area by McInnis and Holloway Funeral Homes, Park Memorial, 5008 Elbow Drive SW, Calgary, AB T2S 2L5, Telephone 403-243-8200.

In Loving Memory of

Anna Rhoda Fossen May 18, 1919 ~ February 16, 2020 Anna Rhoda Fossen was born on May 18, 1919 at Hastings Coulee, Alberta. She grew up on the family farm with her brother Perry. She worked hard on the farm helping her parents and climbing on top of the hip roof barn. In 1941, she married Einar Fossen and continued to work hard and raise her family. In 1997, she moved to Camrose and built a new home and lived there until her passing. Left to mourn her passing are her children Rhoda (Neil) Kruchten, Einar (Elaine), Pat (Gordon) McTavish and Alan (Mona); fourteen grandchildren; and numerous great-grandchildren, greatgreat-grandchildren, nieces and nephews. She was predeceased by her husband Einar in 1996, her parents and brother. Rest in peace, Mum. The family of Rhonda Fossen would like to express our deep appreciation to family and friends for the kindness shown, food, flowers and memorial donations. Thank you to the EMS who took her to St. Mary’s Hospital, the doctors and staff in emergency. Also, thank you to Dr. Clarke and staff at the Royal Alex Hospital for the great care given to her. A special thank you to Rev. Hunter for the lovely service, to Colin Yuha and Burgar Funeral Home for their care and understanding, and the ladies for the lovely lunch. In lieu of thank you cards, a donation has been made to Fairview Cemetery (Hastings Coulee) in Rhoda’s name. – Rhoda’s Family

Donna Mary Pudlowski February 21, 1947 ~ March 15, 2020 Donna Pudlowski, beloved wife, mother, grandmother and great-grandmother, passed away suddenly at home in Daysland on March 15, 2020, at the age of 73. Donna was born in Galahad on February 21,1947 to Frances and Dominic Gamroth. She married the love of her life, Peter Pudlowski, from Kopernick District on November 12, 1966, and then took over the family farm in 1967. They were blessed with four children Stan, Dan, Tim and Rosanne. Donna spent many hours cooking for their hungry farm kids and relaxing in the rock garden. In 2004, they sold the family farm and moved into Daysland. It took some time for them to adjust to living in town, but it was comforting to have the church and hospital nearby. Donna spent her time reading “storybooks” and giving a lot of love to her flowers and plants. We often teased her that she could soon open her own greenhouse. Left to cherish her memory are her children Stan (Marj) of Camrose, Dan (Janine) of Camrose, Tim of Camrose, and Rosanne of Camrose; grandchildren Erik, Dylan and Cassidy; step-grandchildren Tyrone (Jen) Wnuk and Angela (Kirk) Ziefflie; five step-greatgrandchildren; siblings Jane (Glen) Rogoski, David (Cathy) Gamroth, Gerard (Lorelei) Gamroth and Angie (Al) Dietz; sister-in-law Marie Gamroth; and numerous nieces and nephews. Donna was predeceased by her husband Peter, father Dominic, mother Frances, stepmother Mary and brother Peter. Due to Alberta Health Regulations, a private family service was held. If family and friends so desire, memorial contributions in Donna’s memory may be made to Centra Cam. To send condolences, please visit www.burgarfuneralhome.com. 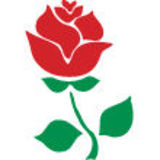