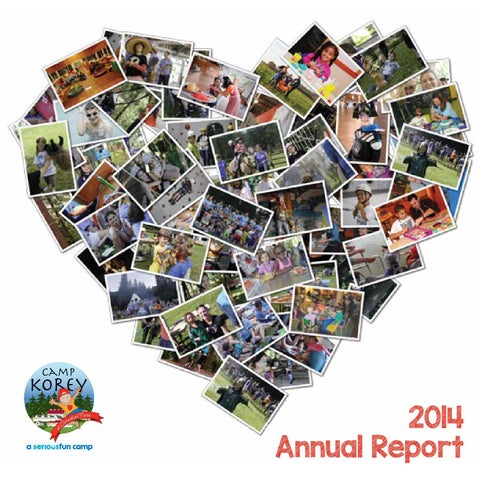 Our Vision To restore childhood to every child and family in the Northwest living with a serious medical condition in a way that complements their existing care, connects them to the community and enhances their well-being. Our Values Joy The deep, relaxed happiness that comes from knowing you are accepted exactly as you are. Growth Play with purpose, challenge by choice, grow as you discover new strengths. Healing Our programs allow campers and families to disconnect from a diagnosis and bond together as a family. Camp Korey at Carnation Farm 28901 NE Carnation Farm Road Carnation, WA 98014 P 425-844-3100 campkorey.org

Dear Friends, On behalf of the board, staff, campers and families, I would like to thank each of you for a â&#x20AC;&#x2DC;heartfulâ&#x20AC;&#x2122; year. For our campers and their families Camp Korey is a community that offers support and connection. With specialized medical support, campers get to experience the adventures of childhood away from the anxiety of the day-to-day challenges of their medical condition. Because of the generosity of our supporters, children living with serious medical conditions have the a chance to just be kids, always free of charge. In 2014 we were honored to receive the support of our community to build our programs and help even more campers. From donors to corporate partners, each hero put on a cape and helped Camp Korey serve more campers, families and patients than ever before. We are grateful for your support and look forward to partnering in 2015 as we celebrate our 10th anniversary. Thank you for all your support!

PATIENTS & FAMILIES in healthcare settings experienced joy and increased self-esteem through music, storytelling, and arts and crafts, easing the burden of times laden with stress and uncertainty.

CAMPERS AND FAMILY MEMBERS experienced respite while bonding with other families at our Family Weekend camps.

GRADUATES of our program returned as Leaders in Training, working to discover and refine their leadership skills while serving as mentors for our current campers.

CAMPERS AND FAMILY MEMBERS maintained peer relationships by reuniting with each other throughout the year at Camper Reunions.

"I have never been around so many people who knew exactly what my family goes through every day. The experience that we had and the information that was shared was not only life-changing, but life-saving." - Camper Parent

“In the beginning I was super shy, didnt say much and was really nervous. By the end of the week I was talking to everyone and dancing in groups! I tried zip-lining, and now I feel almost invincible, like I can do anything if I put my mind to it. Camp korey is a place where I could be “normal” for a week and not have to worry about being judged!” - Camper

“I didn’t know it when we started, but this is one of the best things I’ve done all day!” Camp to You Camper

HIGHLY TRAINED medical and program volunteers ensured the highest level of safety and care for our campers and their families.

HOURS were spent by volunteers to help create the magic of camp and maintain the historic 818-acre Carnation Farm, home to our camp programs.

INDIVIDUAL VOLUNTEERS joined in the Camp Korey mission by serving as program, event, culinary, farm and medical volunteers throughout the year.

GROUPS came to Camp Korey as a volunteer team, tackling a variety of projects.

"There was a point in the weekend where I was playing ping pong with my camper and she seemed like she was having such a good time with not a care in the world. This is what I always strive for when volunteering at Camp Korey, and in that moment, I felt as if I was able to provide my camper with a fun environment." - Camp Volunteer

INDIVIDUALS raised the paddle in support of Camp Korey at our annual Grow event in September, helping raise funds for our year-round programs.

MILES were conquered by our Team Korey athletes, as they raised awareness and funds for camps through marathon runs, cycling events, and even climbing Mt. Rainier.

GIFTS made at our Prescription Laughter Luncheon event in March in celebration of Camp Korey.

POUNDS OF PUMPKINS found homes on the door steps of local families who attended the annual Fall Festival Weekend.

POUNDS OF INGREDIENTS were harvested directly from our certified organic garden and used at our three Farm-to-Table dinners.

Throughout the year, Camp Korey invites our supporters and community to come together in joyful celebration and dedication to our mission. In the early spring we host our Prescription Laughter Luncheon in Bellevue, and kick-off the summer with our Family Day. Summer wraps up with our hand-crafted culinary series of Farm-to-Table dinners hosted in our own certified organic garden. Fall is highlighted with our signature fundraising event Grow, followed by our Fall Festival community event. Scattered throughout are Team Korey sporting events and other special initiatives, including The Korey golf tournament. To learn more about our events please email events@campkorey.org.

In 2005, Tim Rose and his family founded Camp Korey to honor the life of Korey Rose who lost his battle to cancer at age 18. Now in its historic 10th year, Camp Korey has grown into a strong organization, empowering children and their families living with serious medical conditions, through year-round, life changing experiences.

CAMPERS, FAMILIES & PATIENTS served through our year-round programs. In 2008, we hosted our first residential summer camp for 2 weeks, serving just 64 campers. Now, we host 8 weeks of adventures, serving almost 400! We’ve expanded our Family Weekends to 10 sessions, and increased our Camp to You outreach throughout Seattle, Tacoma and Portland.

SESSIONS OF SILLY O, our classic camp food fight, have taken place on the Great Lawn. Campers have the chance to really let loose, and ‘raise a little hell’ in this fun (but safe) food fight with between campers and counselors! This camp tradition is often cited as the number 1 activity by campers.

ENTRIES are in our Book of Firsts, highlighting the amazing achievements of our campers as they gain confidence and self-esteem by challenging themselves. Entries include first time eating kale, first time on a zip line, first time away from home and many more.

RIDES DOWN THE ZIP LINE by our campers! Over our ten year history, we continued to grow our programs, building the universally accessible ropes course and zip line in 2010, the outdoor classroom and pizza oven in 2012, and the addition of archery in 2014.

POUNDS OF FRESH FOOD were produced by our certified organic garden, contributing to camper nutrition, programs and cost reduction.

Located in the heart of the Snoqualmie Valley, Camp Korey is rooted at the historic 818-acre Carnation Farm. As stewards of the land, Camp Korey maintains cultivation projects and hands-on nature activities that connect campers to the land, providing fresh, organic produce and sustainable revenue to support our programs.

Another year stronger, thanks to our generous supporters...

The Stuart Family Endowment Many thanks to our endowment donors. These gifts will be a perpetual source of support for the core mission of Camp Korey, and ensure the excellence of our programs for future campers.

Thank You to Our Super Heroes

You are our rockstars, our superheroes, our supporters. Your generosity makes Camp Korey possible for the thousands we serve each year. Thank you for your endless service to Camp Korey.

We hope you enjoyed learning about the highlights of our 2014 year! We are fortunate to count many foundations, individuals and corporations among our ever-expanding circle of supporters. Camp Korey gratefully acknowledges the generosity of our friends, and we apologize in advance for any errors we have made in this Annual Report. If we have omitted your name, spelled it incorrectly or failed to acknowledge your gift, please let us know so we can correct our mistake. Please email Kelly Brackett with any omissions at kbrackett@campkorey.org.

2014 Camp Korey Board of Directors PRESIDENT