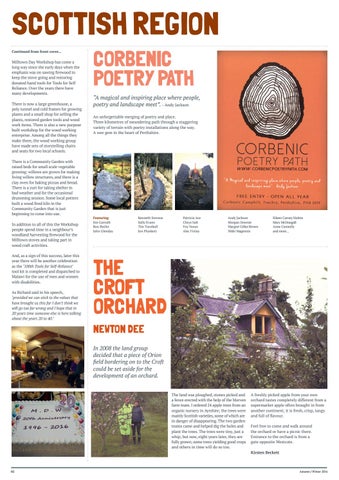 Milltown Day Workshop has come a long way since the early days when the emphasis was on sawing firewood to keep the stove going and restoring donated hand tools for Tools for Self Reliance. Over the years there have many developments. There is now a large greenhouse, a poly tunnel and cold frames for growing plants and a small shop for selling the plants, restored garden tools and wood work items. There is also a new purpose built workshop for the wood working enterprise. Among all the things they make there, the wood working group have made sets of storytelling chairs and seats for two local schools. There is a Community Garden with raised beds for small scale vegetable growing; willows are grown for making living willow structures, and there is a clay oven for baking pizzas and bread. There is a yurt for taking shelter in bad weather and for the occasional drumming session. Some local potters built a wood fired kiln in the Community Garden that is just beginning to come into use. In addition to all of this the Workshop people spend time in a neighbour’s woodland harvesting firewood for the Milltown stoves and taking part in wood craft activities. And, as a sign of this success, later this year there will be another celebration as the ‘100th Tools for Self-Reliance’ tool kit is completed and dispatched to Malawi for the use of men and women with disabilities. As Richard said in his speech, ‘provided we can stick to the values that have brought us this far I don’t think we will go too far wrong and I hope that in 20 years time someone else is here talking about the years 20 to 40.’

CORBENIC POETRY PATH “A magical and inspiring place where people, poetry and landscape meet”. - Andy Jackson An unforgettable merging of poetry and place. Three kilometres of meandering path through a staggering variety of terrain with poetry installations along the way. A wee gem in the heart of Perthshire.

THE CROFT ORCHARD NEWTON DEE In 2008 the land group decided that a piece of Orion field bordering on to the Croft could be set aside for the development of an orchard. The land was ploughed, stones picked and a fence erected with the help of the Morven farm team. I ordered 24 apple trees from an organic nursery in Ayrshire; the trees were mainly Scottish varieties, some of which are in danger of disappearing. The two garden teams came and helped dig the holes and plant the trees. The trees were tiny, just a whip; but now, eight years later, they are fully grown; some trees yielding good crops and others in time will do so too.

A freshly picked apple from your own orchard tastes completely different from a supermarket apple often brought in from another continent; it is fresh, crisp, tangy and full of flavour. Feel free to come and walk around the orchard or have a picnic there. Entrance to the orchard is from a gate opposite Westcote. Kirsten Beckett