Camp For All Annual Report 2017 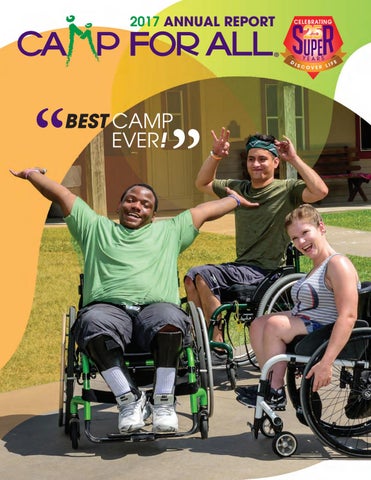 Camp For All is a unique, barrier-free camp working in partnership with 64 not-for-profits to enrich the lives of children and adults with challenging illnesses and special needs and their families, throughout the year.

CAMP FOR ALL is the greatest place on

Camp For All is the national leader in creating and providing proven life-changing experiences for children and adults with challenging illnesses and special needs through passionate and professional staff, cutting edge facilities and innovative programming. The barrier-free, not just accessible, camp is located on 206 acres in Washington County, Texas and served more than 11,000 campers in 2017. Camp For All 2U provides this same life-changing experience for children who are unable to leave the hospital. This unique, one-week day camp program took place inside six hospitals in 2017 and proved to be a gateway for those children to get back into life. The American Camp Association awarded Camp For All 2U the prestigious Eleanor P. Eells Award in 2017 for program excellence as well as excellence in research in practice at camps.

Camp For All celebrated 25 years of providing our unique â&amp;#x20AC;&amp;#x153;can doâ&amp;#x20AC;? experiences for a record number of campers with special needs in 2017. More than 11,000 children and adults discovered life. In collaboration with 64 not-for-profit organizations, we hosted an astounding 151 unique camps. Seven were new, including First Light Family Camp for veterans and their families receiving mental health treatment from Easter Seals. To top it off, Camp For All reached a major milestone in the fall when we welcomed our 150,000th camper! Camp For All 2U, the outreach program where we take Camp activities into hospitals, grew to a total of 6 week-long, day camps, including Texas Childrenâ&amp;#x20AC;&amp;#x2122;s Hospital West. This important program continues to provide children who are unable to leave the hospital to have the Camp For All experience, respite from their treatment, and an opportunity to get back into life.

As we all know, Hurricane Harvey wreaked havoc and impacted the entire region, causing many to suffer serious losses. I am pleased to report that although several camps had to cancel, Camp weathered the storm. The remediated dam and spillway were finished earlier in the year and operated perfectly. In fact, our lakes, which were empty for two years, were refilled and campers are once again fishing and canoeing. The dedicated Camp For All staff continued to work hard in keeping our facility in top shape. The pool was renovated and looks better than ever, all cabins received new metals roofs, and the Main Building and the Retreat Cabins were repainted and look brand new! In addition, the staff continued to amaze with their caring and creative efforts to ensure that campers completed challenges and activities they never thought possible. Campers tell us that their time at Camp For All is the most important part of their year. I invite you to visit Camp For All, or sign up to volunteer, and see the magic happen, firsthand! Thank you to our generous donors and volunteers who provide the critical support that ensures Camp For All continues to achieve our mission. Sincerely, Michael Lewter Chair, Board of Directors 2018

tell us that their time at Camp For All is the most important part of their year.

Launched SONG OF THE YEAR:

GALLONS OF National Award from

Camp For All is the best part of my year!

Camps that come to CAMP FOR ALL

KGAT (Kids Get Arthritis Too) Arthritis Foundation Children with arthritis

MOST Easter Seals Of Greater Houston Teens with disabilities

chaired by Laurie and Jack Maddox and

Contributions and Special Events Investment Return Camp For All provides 63% of the cost for each camper.

My son talked about Camp For All the entire drive home!

This will be my fifth year coming to Camp For All!

I miss that place

every day. I hope to

“ Thank You Camp For All DONORS

Knowing I’ll be going to Camp For All this summer is the only thing getting me through this year!

I love seeing all of my friends at Camp!

I caught my very first fish at Camp For All!

This was my first time ever getting to ride a horse!

to be going back to Camp For All not as a camper,

but as a counselor this time!

Our family sings all the songs you sing at Camp For All, because our daughter sings them all year long!

Camp For All Annual Report 2017 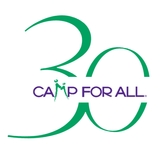