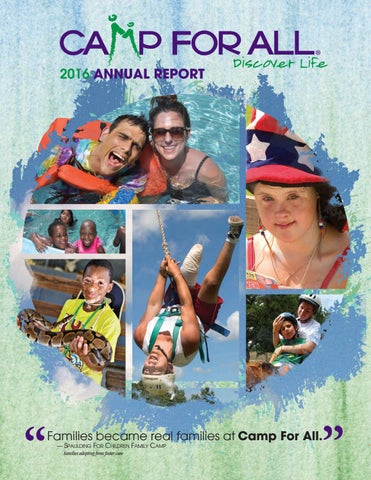 Families became real families at Camp For All. — Spaulding For Children Family Camp

MISSION Camp For All is a unique, barrier-free camp working in partnership with 64 not-for-profits to enrich the lives of children and adults with challenging illnesses and special needs and their families, throughout the year.

Every year that my kids and I go to Camp For All, it’s an experience of a lifetime.

—MS Family Discovery Camp Families that have an adult with MS

Camp For All is the national leader in creating and providing proven life changing experiences for children and adults with challenging illnesses and special needs through passionate and professional staff, cutting edge facilities and innovative programming. The barrier-free, not just accessible, camp is located on 206-acres in Washington County, Texas and served nearly 11,000 campers in 2016. In 2014, Camp For All 2U was launched to provide this same life-changing experience for children who can’t leave the hospital. This unique, one-week day camp program took place inside five hospitals in 2016 and proved to be a gateway for those children to get back into life. Campers come to Camp For All with many challenges including autism, muscular dystrophy, cancer, Down syndrome, cognitive differences, multiple sclerosis, neurofibromatosis, PKU, spina bifida, sickle cell disease, seizure disorders, HIV, brain trauma, missing limbs and more.

“Can’t do” becomes “can do” by fostering each camper’s independence, building their confidence through encouragement and support, and helping them discover their fullest potential.

Camp For All is pleased to bring you the Annual Report for 2016, a year of expected and – in one case – unexpected success. As expected, the demand for Camp For All continued to grow in 2016. Almost 11,000 children and adults from 139 total camps – including five new camps – discovered life during the year. Camp For All 2U, where we bring the camp experience to patients in hospitals in the heart of a city, exceeded expectations. A total of five Camp For All 2U camps were held in Houston and Austin in 2016, including a new camp at Texas Children’s Hospital. Whether campers attended our traditional camp or Camp For All 2U, they were able to push their challenges to the side, for at least a little while and instead, have fun in an accepting and supportive environment where the focus was on what they could do as opposed to what they couldn’t do. Creating new and exciting programming to always keep the camp experience fresh is an ongoing goal at Camp For All. In 2016, we launched Camp For All News Network (CNN) where campers developed their own news program and in the process, learned creative writing, time management, public speaking, videography and more. Unexpected new programming was necessarily developed thanks to Mother Nature. In 2015, major improvements were made to the dam at the main lake, designed to withstand a 100 year flood. Torrential rains in the spring of 2016 caused a 500 year flood that even the new improvements could not withstand, putting the main lake and our bass lake temporarily out of commission.

Our exceptional program supervisors were able to quickly and imaginatively create new activities including a puppy program and miniature car racing, to fill the void. New repairs for the dam began in December of 2016 and are expected to be completed in the spring of 2017. Our dedicated staff worked hard to maintain and enhance our facilities. A new cool deck was installed at the pool, the exteriors of eighteen cabins were repainted and the new office space at Camp was finished and enthusiastically embraced by the staff.

Camp For All is proud of its accomplishments in 2016 and looks forward to celebrating its 25th anniversary in 2017. We offer our sincere thanks to the staff that always goes above and beyond to make camp run smoothly, to our volunteers who devoted over 9,400 hours of service to Camp For All in 2016 and of course, to our generous financial contributors who provide essential support to ensure that Camp For All always has the ability to achieve its mission. Sincerely,

Rogers Crain Chair, Board of Directors

My son had a weekend he’ll never forget! —K atie

Love, Love, Love CAMP FOR ALL

Arbor The Arbor School Families with children with developmental delays

The Parish School Children with social and learning differences

Periwinkle The Periwinkle Foundation Children with cancer and their siblings

Our son had the

time of his life.

This was such a wonderful weekend filled with — Retreat of Renewal tears, hope, and healing.

Families who have lost a loved one to cancer

I’m very thankful for this Camp for everything.

I met some of my best of friends at Camp. — YOLO

Love is felt throughout the camp. — B A A e

Families that have a child with special needs

Creating new and exciting programming to

always keep the camp experience fresh is an

CAMP FOR ALL was the best

thing to ever happen to me. — Discovery/Dermadillo

We are so proud of him, he really stepped out of his box and tried lots of new things. — du Ballon Rouge

2016 Camp For All Annual Report

2016 Camp For All Annual Report