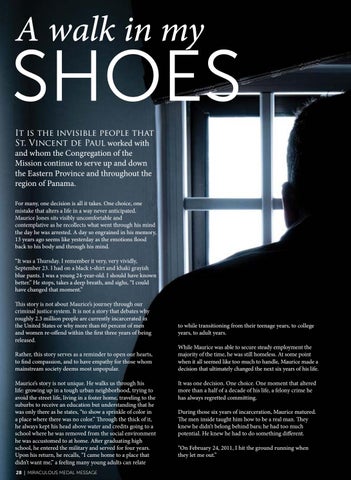 A walk in my

SHOES It is the invisible people that St. Vincent de Paul worked with and whom the Congregation of the Mission continue to serve up and down the Eastern Province and throughout the region of Panama. For many, one decision is all it takes. One choice, one mistake that alters a life in a way never anticipated. Maurice Jones sits visibly uncomfortable and contemplative as he recollects what went through his mind the day he was arrested. A day so engrained in his memory, 13 years ago seems like yesterday as the emotions flood back to his body and through his mind. “It was a Thursday. I remember it very, very vividly, September 23. I had on a black t-shirt and khaki grayish blue pants. I was a young 24-year-old. I should have known better.” He stops, takes a deep breath, and sighs, “I could have changed that moment.” This story is not about Maurice’s journey through our criminal justice system. It is not a story that debates why roughly 2.3 million people are currently incarcerated in the United States or why more than 60 percent of men and women re-offend within the first three years of being released. Rather, this story serves as a reminder to open our hearts, to find compassion, and to have empathy for those whom mainstream society deems most unpopular. Maurice’s story is not unique. He walks us through his life: growing up in a tough urban neighborhood, trying to avoid the street life, living in a foster home, traveling to the suburbs to receive an education but understanding that he was only there as he states, “to show a sprinkle of color in a place where there was no color.” Through the thick of it, he always kept his head above water and credits going to a school where he was removed from the social environment he was accustomed to at home. After graduating high school, he entered the military and served for four years. Upon his return, he recalls, “I came home to a place that didn’t want me,” a feeling many young adults can relate 28 28 || MIRACULOUS MIRACULOUS MEDAL MEDAL MESSAGE MESSAGE

to while transitioning from their teenage years, to college years, to adult years. While Maurice was able to secure steady employment the majority of the time, he was still homeless. At some point when it all seemed like too much to handle, Maurice made a decision that ultimately changed the next six years of his life. It was one decision. One choice. One moment that altered more than a half of a decade of his life, a felony crime he has always regretted committing. During those six years of incarceration, Maurice matured. The men inside taught him how to be a real man. They knew he didn’t belong behind bars; he had too much potential. He knew he had to do something different. “On February 24, 2011, I hit the ground running when they let me out.”